Amid the discarded tickets strewn on the floor and the quiet desperation of people milling about, Linda Rice stood and stared at the overhead bank of tv screens, exuding calm but grappling with her own anxieties. After countless hours invested with her charges—in this case a 3-year-old gelding named Danceteria—the highly regarded trainer was reduced to merely a spectator in the second floor clubhouse. It’s Wood Memorial Saturday at Aqueduct Racetrack. A large crowd is on hand, serious wagers are being laid and all hell is about to break loose. Rice is among them. She doesn’t bet, but she’s made the largest wager of them all.

This morning Rice, 49, was at her Belmont stables by 6am putting the 50 horses in her care through their paces, paying special attention to three thoroughbreds expected to compete at the nearby Queens cathedral to horseracing later that day. She loves horses, but this is serious business. The third-generation trainer has been winning races since 1987. Nearly 7,000 starts and 1,100 victories later, Rice has raked in $37.7 million in career earnings, keeping 10 percent for herself. “What makes her unique are the details she pays attention to,” assistant trainer Josie Palmisano said of her boss and mentor. “She wants to examine every horse every day. She’s dedicated. She works twice as hard as anyone else. And she has to in a sense. She’s a woman in a man’s game.”

No one sees Rice in those terms anymore. True, she became the first woman to win the training title at Saratoga in 2009. It was a first for any major venue in the nation. But she’s no longer the barrier-breaking female trainer. She’s simply one of the most respected horse whisperers in the sport. “When I first came to New York, the guys, they didn’t give me the time of day,” Rice recalled over a cup of coffee. “They thought I was just a flavor of the month.” Winning changed everything. Rice, the two-time New York Thoroughbred Breeders trainer of the year, succeeds by controlling every facet of her business. She employs a staff of 40, from groomers and hot walkers in the stables to practice riders, foremen, assistant trainers and even secretaries. It’s a complex operation that spins into motion before dawn 365 days a year. The serious work is done on an empty track at Belmont as seven riders breeze thoroughbreds in eight half-hour shifts.

The horses actually practice loading into the starting gate, a routine called gate schooling. Nothing is left to chance. Michael Ciaccio, who owns five horses managed by Rice, drove from New Jersey with his wife Jerina to watch one of the early sessions. He was on hand as the veteran trainer, stopwatch in one hand and a radio in the other, instructed one of her riders over an earpiece. “She knows the game,” Ciaccio said. “She loves the horses. She keeps you competitive.”

Owner and trainer walked back to barn No. 44 through the maze of buildings that represent the hidden heartbeat of Belmont and New York horseracing, talking shop along the way. She tells him that one of his other investments may have to be gelded—the process of removing the testicles—for peak performance. Horses are typically gelded when the testicles interfere with its ability to run at full speed, a surgical procedure that takes minutes and heals in weeks.

He appreciates Rice’s honesty as much as her track record. “She tells you what it is,” Ciaccio said. “It is what it is. And in this business you need the truth.” 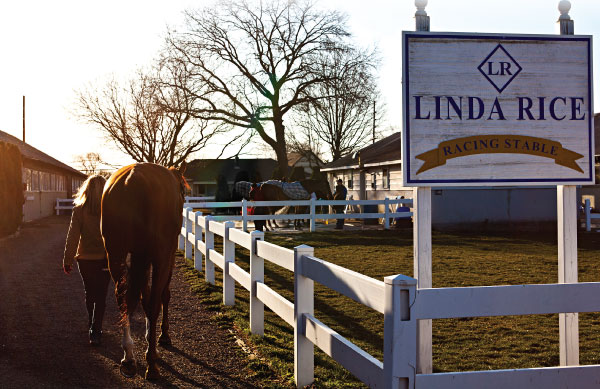 The truth reveals itself on race day. The April mid-afternoon sun was bright at nearby Aqueduct as Rice handled Danceteria one last time, watching his gait as the horse auditioned for bettors in the paddock like a showroom sports car. Rice then slipped the red No. 1 cloth, saddle and bridle over the beast. Now it’s up to the big red machine with impeccable bloodlines and the winningest jockey at Aqueduct this spring, Cornelio Velásquez, to make it happen. Race seven is a one 1/16-mile turf marathon, a distance Danceteria had never before run. Rice gladhanded the owners, gave the jockey a few more words of advice and as Danceteria trotted to the starting gate, the trainer took her spot among the masses. And then madness erupted at the racetrack. The gates slammed open, bells clanged and Danceteria jetted out front using his rail position to take the early lead. A full house yelled in delirium as the race unfolded; a mix of anger, astonishment and excitement. 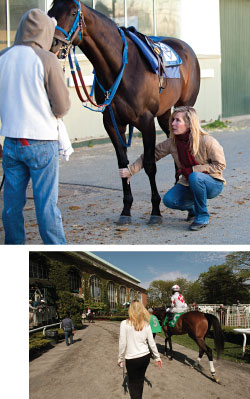 Even Rice wasn’t immune. “Come on Cornelio!” Rice said in a quiet intensity as she stared up at the tv. Danceteria ran in the top three as he rounded the final straightaway. The moment of truth and hope collided headlong with reality. Cornelio’s ride seemed to stall as one rider after another slipped by. Spectators screamed for their horse—in most cases their wager—to close strong as the pack closed in on the finish line. In an instant the race was over. Danceteria faded down the stretch to finish last in the 11-horse field. Gimme Credit, the favorite, won the $67,000 purse. “He can’t run long,” Rice instantly diagnosed. “We’re going to have to sprint him.”

When you train horses for a living, successes and failures are out in the open. No matter the pedigree, trainer or jockey, it’s ultimately up to the animal. That’s simply part of the thoroughbred business. The Wood Memorial race has come and gone. While the crowds who showed up for a showdown of Kentucky Derby contenders cleared out, Rice was still hard at work 14 hours into her usual routine. There’s no time to dwell. The process begins all over again in a few hours.

Horse Equity
When the economy tanked in 2008, owners gave up their hobbyhorses in droves—along with an average upkeep of $3,500 per month—and the industry shuddered at the sudden pullback. “It was either the boat or the horse,” Josie Palmisano, Rice’s assistant trainer, surmised. Horseracing suffered through the recession and trainers like Rice bore the brunt of the pain. “The industry in general took a big hit,” she said. “People were struggling to keep up with their mortgages. Having a luxury item like a racehorse was just not on the agenda. It was tough that way.”

It took nearly five years for her business to recover and so has the sport of kings.

Rice, who has won 17 percent of her career starts, chases the thoroughbred season from winter races in south Florida to spring starts at Aqueduct. But Belmont, which opened April 26, is home. Come July 19 the entire operation will shift to Saratoga. In between it all, she hunts for the next great equine prospect.

Rice lives in Floral Park, a horseshoe’s throw away from the track. She’s from a Wisconsin family of thoroughbred trainers and grew up in the saddle. As a 9-year-old she attended a horse auction in Kentucky with her father Clyde and that’s what got her hooked. Today, not only does Rice train and handicap, but she also scouts for talent.

Whether it’s experience, instinct or something deeper, few have the knack she does at spotting potential and then coaxing the foal into the racing machine she sees. When Rice spotted Hay Shares at auction in April 2012, Palmisano recalled, she recommended the horse to several clients on hand. One after another turned Rice down, discounting Hay Shares for one reason or another. But Rice was determined to have him. And she did, for $32,000. Hay Shares won the $50,000 Maiden Special at Aqueduct March 27. The horse no one wanted broke to the front of the pack and finished five lengths ahead of the field.