Richard Migliore, a retired jockey who grew up in Bay Shore, remembers his carefree days in the 1970s as a good time for a boy who loved horses: “A whole group of us had ponies and we would ride behind the high school athletic fields, even right on the fields. We would ride to Belmont State Park, down to the lake and let our horses swim in the lake. Instead of jumping on a bike, we jumped on a horse. It was a great time to be a kid.” 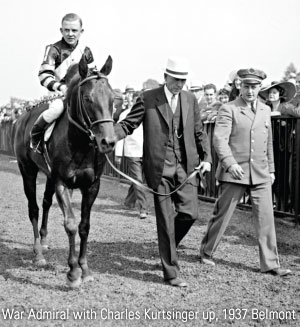 Long Island has always been horse country, home to individuals who own steeds as well as to famous racetracks, polo clubs and horse shows. The first thoroughbred track ever built in the United States, in 1665, was in Salisbury Plains, part of the Hempstead Plains near Garden City. The Meadowbrook Polo Club in Old Westbury is the oldest polo club in the nation, incorporated in 1881. And while youngsters no longer saddle up to ride through most neighborhoods, the Island’s devotion to horses stretches from the Queens border at Belmont Park in Elmont to the East End, site of the Hampton Classic Horse Show in Bridgehampton.

Migliore, now 49, was so besotted he dropped out of the ninth grade, claimed to be 16 though he was two years younger, and nabbed a contract at Belmont Park racetrack. A few years earlier, he had bought his own pony, a pinto he named Cochise, by saving money from jobs at local horse farms like Hunting Hollow in Dix Hills, now a gated community. “I thought it was the most beautiful place in the world. I mucked stalls, and they gave me a dollar a stall.”

Two other people who have witnessed changes in the equine scene over several decades are Alvin and Patsy Topping, who founded Swan Creek Farms in Bridgehampton in 1970. These days they live near Camden, SC, where they care for horses no longer able to compete in the Hampton Classic and similar shows. “We give them a good retirement,” said Patsy Topping. In the early days, even before they started Swan Creek, she found everything to be more informal. “We had horse shows in each other’s barns and at the end of the summer we gave out awards.” Folks hunted foxes together regularly along the North Shore or East End though not much anymore, according to Alvin Topping, and now their hounds usually follow a scent instead of a real fox.

The Toppings believe suburban development changed much of that relaxed environment, as did more rigid rules. “Horse shows became more sophisticated and demands evolved over the years, so a horse really needs to be a specialist,” said Patsy Topping. A show horse not only has to maintain the correct stride, he also must keep his ears pricked just so. Many compete on an international circuit of hunter/jumper shows, of which the Hampton Classic is a key part. Migliore contends that horse lovers are mostly compartmentalized within their own sports now: “Paths cross, but there’s not a lot of intermingling.”

Horses have been part of the fabric of Long Island life for centuries, for farming, transportation and pleasure. Richard Nicolls, New York’s colonial governor, selected Long Island in 1665 for that initial thoroughbred racetrack. It was called New Market, said Allan Carter, historian at the National Museum of Racing and Hall of Fame in Saratoga. “All the courses then were built in a straight line,” as in England, which meant that usually “only the gentry could see the finish of a race.” After the Revolutionary War, Carter said, Americans changed to a more democratic oval. Major William Jones, a former cavalry officer who built a home on Cold Spring Harbor in 1806, frequently exercised his thoroughbreds on a nearby beach and, according to architectural historian Elizabeth Watson, it was said of him that “next to his family, he loved his horse.” Racing and betting fell out of favor for a while but came back in the 1820s, and in the 1880s harness racing became extremely popular. The outline of a track in Port Jefferson Station still exists today.

By 1902, when former Secretary of the Navy William C. Whitney and August Belmont II, who both owned estates on Long Island, were looking to build the best track yet in the United States, they chose a 650-acre site known as Foster’s Meadow. Belmont Park, as they called the racetrack, opened on May 4, 1905. Polo has flourished on Long Island since 1879, when members of the Meadow Brook Polo Club started playing on the infield of a racetrack at the Mineola Fair Grounds. Incorporated two years later, the club helped usher in polo’s “golden age” of popularity in the 1920s. In 1968, it settled in Old Westbury, where visitors may now attend most matches without charge. Other spots to watch matches include Bethpage State Park, where Polo at the Park is hosted by Country Farms, Inc. (and sponsored by this magazine); Country Farms in Medford; the Southampton Hunt and Polo Club and the Bridgehampton Polo Club.

Predecessors to the Hampton Classic, which features jumping and other events, started in the early 1900s in Southampton. The current show has been held since 1982 in Bridgehampton, where it has grown into a seven-day affair that draws about 50,000 visitors. A Kids Day, a Long Island Day, a shopping area, celebrities in the audience and Olympic veterans competing are among the elements that help to create a world-class affair. It’s a long way from friends meeting in barns or kids riding ponies through suburban streets.

Historic Cowhands:
Montauk’s Deep Hollow Ranch claims both “birthplace of the American cowboy and the oldest working ranch in the U.S.A.”

Haute Horsemanship:
Polo runs all summer through September. Large, fashionable hats not required, though encouraged. Picnics are often welcome, as is assistance in stomping divots. But it’s all good fun and most offer extensive services, food and cocktails in the tents. Ticket prices, if any, vary.