ONE
And that’s precisely why you should pack a towel when heading over to Governors Island for a day of bike riding and picnicking and soaking in the grandeur of one of the most overlooked treasures in the city. Chock full of groves and terraces and gigantic lawns as well as bike paths, “Nut Island” (as the natives used to call it because of its particular flora) was bounced around a bit in terms of ownership. Now that the City of New York actually is responsible for its 172 acres of “car-free” space, expect lots of priming and prepping for outdoor gatherings including The 3rd Annual New York City Poetry Festival on July 27th and 28th. This event, like many things you can do on Governors Island, is totally free, except for the bike rentals if you go that route. Even the ferry ride, which is a wonderful little jaunt off the southern tip of Manhattan, is free—a rarity in the city of (often quite expensive) dreams. 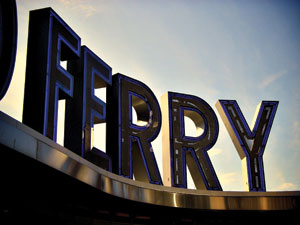 TWO
Speaking of ferry rides, what’s the best view of lower Manhattan and the great goddess of liberty? What’s the stalwart work horse of NYC’s public transportation system? What’s the best bargain for the closest simulation to an amusement park ride taken over by a pragmatic bunch of commuters? It’s the Staten Island Ferry, people, and you should ride it there and back at least once in your life. This iconic barrel of history is totally New York and services over 20 million people a year. Although it is, for the most part, a pretty nuts and bolts type of outing the SI ferry ride does let loose every once in a while. Check out the annual Argentine Tango Festival, which happens every July on the deck of the ferry on top of the only traffic-free road in New York City.

THREE
When I tell my students that they must see Shakespeare in order to understand Shakespeare, I secretly wish that the school year extended a little into the summer season if only for this: Shakespeare in the Park. The Public Theater is the brain behind the operation that has become, arguably, the most well-received place for Shakespeare productions in the country. This year’s schedule features a rendition of The Comedy of Errors and Love’s Labour’s Lost, a new musical based on the play by the same name. What makes Shakespeare in the Park so special are the unconventional castings and sets as well as the fiercely democratic insistence on keeping the prices low. Then there’s also Central Park, which is, well, Central Park. And even though most of the crowd on a really beautiful day is letting the pentameter fly gracefully above their heads while they busy themselves with the handing off of grapes and the general appreciation of all things nature, they’re still experiencing The Bard, and that’s never a bad thing.

FOUR
NYC summer streets. For three Saturdays in August, the city is transformed into a gigantic playground of rock climbing, biking, skating, zip lining, exercising, cheering on, doodling, art making and happening joyous good time. I’m talking actual streets—Lafayette and Park Avenue…all the way up to Central Park. Summer Streets was created by the New York City Department of Transportation, who knows a thing or two about moving people from here to there efficiently. This program is no exception and probably will make you consider what it might be like if your office were just a zip line and a harness (and an incredible adrenaline rush) away. Bring you sneakers, your intestinal fortitude and your fondness for good and pure fun.

FIVE
The Bohemian Hall & Beer Garden in Astoria is evidence that Eastern Europeans know how to have a good time. It’s essentially a huge backyard full of beer and sausages with the occasional live music injection and a raffle or two. What can be better for summer? The locals have been known to spend days if not weeks in a row here without even blinking an eyelash. Forget the iCal and what’s on your plate for tomorrow. Let summer be summer. Time will fly and you will feel like you’re in your college years again (without the obnoxious and immature forgettable parts). Just the revelry and cheers. Lots of cheers. For everyone.

West of LI Reprise
Highlights from the monthly column at lipulse.com/westofli

The faithful already know: This is the column that gives you your one “must do” beyond Nassau County’s border. For the uninitiated (papa Alan forgives), go on and click with abandon to find out more about these treasures waiting in our cousin Metropolis.

3. Rooftop Films
Bringing the underground to above ground since 1997.

4. Brooklyn Botanic Garden>
Plants and trees and flowers (and your imagination) in bloom.

5. Highline Park
The most interesting “hike” in New York City.

6. Rubin Museum of Art
Because we all need something to do on a rainy day.