Compared to some of its prestigious neighbors, Southampton’s Sebonack Golf Club is still in its infancy. Shinnecock Hills sits regally on the other side of County Road 39, awaiting its fourth US Open visit in 2018. Between the two lies National Golf Links of America, host to the prestigious Walker Cup this September. Then there’s Maidstone in East Hampton, Atlantic and The Bridge in Bridgehampton, Gardiner’s Bay on Shelter Island—all boasting “only-if-you-know-somebody” credentials. But despite the notable neighbors, no one is relegating Sebonack to the kids’ table.

In fact, Sebonack has more than held its own, as the elite pros will learn when they take the course for this month’s US Women’s Open.

“As Jack [Nicklaus] said when we got the Open, Sebonack is more than up to the challenge of any championship,” Sebonack owner Michael Pascucci said. It has been barely a decade since Pascucci purchased the 300-acre plot along the Peconic Bay for a cool $46 million. He enlisted Tom Doak, who built some of the world’s top courses, most notably Pacific Dunes in Oregon. Doak teamed with Nicklaus, whose legendary play is surpassed only by his legendary design, including Muirfield Village Golf Club in Dublin, Ohio. Pasucci also brought on course superintendent Garret Bodington, who worked three Masters at Augusta National Golf Club in the 1990s, and prepped Bethpage State Park for its first major, the 2002 US Open. This dream team was charged with turning Pascucci’s vision into a reality.

“We wanted to make a course for amateur members that is still a challenge for pros,” Pascucci said. “It’s hard to do, but we did it with Sebonack.” For proof see the 18th hole, where a stunning view of Great Peconic Bay lets pros enjoy a birdie while the amateurs work to avoid the minefield of sandtraps that pepper the fairway. 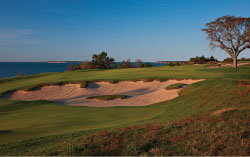 Sebonack will be no pushover for the 156 amateur and professional female golfers who will take it on June 27-30. In its history, no player, male or female, has carded lower than a 69, and that was set by former world No. 1 Luke Donald. He broke Ernie Els’ previous mark of 70, which stood for six years. There are more than 100 bunkers around which to navigate, and at approximately 6,850 yards, it will play as one of the lengthiest Women’s Opens in history.

“I think it will be won by the best chipper because you’re going to miss a lot of greens at Sebonack,” Pascucci predicted. “It’s the kind of course you really need to play 6-8 times to really get it.”
However, it’s a challenge that the likes of Inbee Park, Stacy Lewis, Michelle Wie, Yani Tseng and defending champion Na Yeon Choi are accustomed to facing—pristine yet treacherous conditions featuring grass that is either cut low or grown high specifically for their weekend visit. But the course isn’t just a test for the players, it’s also a treat for the spectators. Sebonack has water views on 13 of its 18 holes. The clubhouse empties out to a breathtaking view of the Peconic. Pascucci’s choice location is a vista in the southeast corner of the course. “You can watch the 11th fairway, the entire 12th hole, the 16th tee and the 15th green,” he said. “You don’t even have to be watching golf and enjoy the view for one or two hours.”

However, though it is equal parts difficult and breathtaking, it is Sebonack’s exclusivity that puts it in the pantheon of East End golf. Membership hovers around 200 and new members aren’t admitted unless they’re recommended by one of Sebonack’s 10 founding members, a team of billionaires who were on board in the club’s early stages. Their initiation fee: A mere $650,000.

Long Island golf fans who have only heard about Sebonack’s majesty will finally get to see it with their own eyes. And with the strength of numbers that have made the Island a destination for five men’s Opens, fans are expected to come out in droves not only for championship golf but also to see the newest kid on the block.

The US Women’s Open is traditionally the toughest of the five majors on the LPGA Tour and Sebonack figures to be every bit as challenging as those preceding it. According to Sebonack’s superintendent Garret Bodington, these three holes could decide the championship. 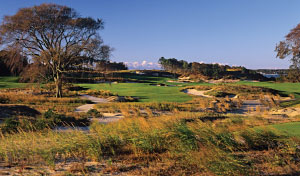 11 (430-yard par 4): “It’s one of our most challenging holes. The approach shots play into a prevailing wind and the green is right along Peconic Bay. It’s going to take two good shots for the players to put themselves in position to birdie.”

18 (520-yard par 5): “It’s downhill and downwind and it’s going to be possible for the players to go for it in two. With the bay down the left-hand side, it’s a great setting for a finishing hole and it’s a hole that they’re going to be able to birdie.”

The best of the best

The US Women’s Open will showcase Sebonack’s wild curves and challenging fairways, but all eyes will be on Nos. 1 and 2, who will play for supremacy at the Open.

Of note: Captured year’s first major title, the Kraft Nabisco Championship, by four strokes, the same margin by which she won the 2008 US Women’s Open at just 19 years old… Recorded 10 consecutive top-10 finishes in 2012 en route to more than $2 million in winnings

Of note: Won HSBC Women’s Champions 2013 and RR Donnelley LPGA Founders Cup in back-to-back weeks in March… Ranked first on tour in scoring average. Named 2012 Rolex Player of the Year after four Tour victories and 19 top 10 finishes… Is the last US player to win a major, taking home the 2011 Kraft Nabisco Championship.

All stats through May 15