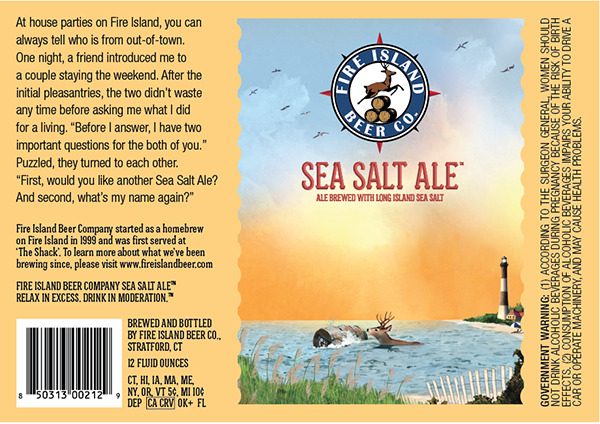 Since Fire Island is synonymous with summer, creating a beer dedicated to the 32-mile stretch’s most human-inhabited season seemed inevitable for Fire Island Beer Company. After four years of existence, the inevitable is now pouring.

“It’s a light beer with some salinity, citrus, and a nice fluffy head,” says Bert Fernandez, co-owner. “It’s perfect for the summer.”

Fernandez opened Fire Island Beer Company with his brother, Tom, and cousin, Jeff Glassman, in 2009. The trio started homebrewing in Atlantique, a Fire Island-located community, in 1999 and introduced samples to customers while working at The Shack, a local snack bar.

Sea Salt Ale is only its fifth beer, and the first since releasing Frozen Tail Ale in 2010 (the deer-branded company started with an amber flagship, Lighthouse Ale, and followed with Red Wagon IPA and Pumpkin Barrel Ale). Fernandez has wanted to create a summer beer for two years. They started test-batching Sea Salt Ale in January.

“It was time to start expanding the portfolio, and a summer beer was the next logical season for us,” says Fernandez. “We tried some styles with salt, but we didn’t want to make a gose. A blonde worked real nicely.”

The Cortland hosts a kickoff for Fire Island Beer Company Sea Salt Ale at the YMCA Boulton Center on June 05. The event also features a screening of the 1985 film, The Goonies.