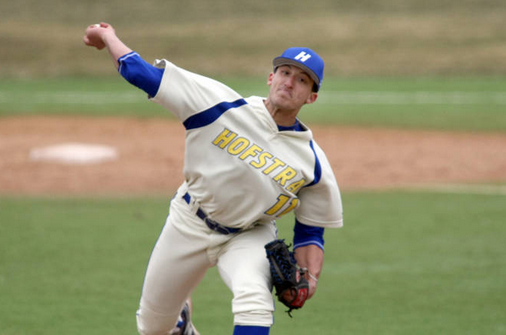 Move over Carl Yastrzemski and Craig Biggio, there are 13 new ball players from Long Island schools who were drafted by major league teams this week. Some will go to the minors, some will head to college, and all will remember the day their names popped up on the MLB.com Draft Tracker.

Highlighting the 13 athletes is Bryan Verbitsky, an Island Trees High School alum out of Hofstra University. The Padres made him the 86th overall selection in the third round on Saturday.

He is the ninth player in Hofstra history to be drafted and third in the last four years. As a junior he was 3-4 with a 2.66 ERA in 19 appearances and led the Pride with 51 strikeouts and had just 10 walks. A bullpen pitcher at one point, he ranks second in Hofstra history with 11 career saves.

Verbitsky played in the Cape Cod Baseball League last summer where he was named an All-Star and grabbed considerable attention from area scouts. At Island Trees he was a two-time Diamond Award recipient as the top baseball player in Nassau County. He was also two-time All-New York State, two-time All-Long Island and three-time All-County.

“It was quite a surreal moment to hear my name get called,” said Verbitsky in a release from Hofstra. “My family and I could not be happier. I knew that the Padres were interested in me, but it was still a pleasant surprise to get selected when I did. I want to thank the Padres organization for giving me this opportunity.

“I also want to thank Coach Russo, Coach Haynes, Coach Johns, Coach Colasuonno and all of my Hofstra teammates for all that they have done for me. I would not be in this position without them. I would also like to thank the entire Hofstra University community and fans of Hofstra Baseball. It was great playing right in my backyard and I have many great memories of my three years here.”

The next highest Long Island native drafted was Kyle McGowin, who went at No. 157 in the fifth round to the Los Angeles Angels out of Savannah State. The right-handed pitcher from Sag Harbor’s Pierson High School was the Mid-Eastern Athletic Conference (MEAC) Pitcher of the Year after finishing with a 1.49 ERA and 12-1 record in 96.1 innings pitched. He also had 111 strikeouts to lead the conference and was ranked No. 6 in the nation.

Vogel has already said on Twitter that he is committed to playing at the University of South Carolina and will be draft eligible again in three years.