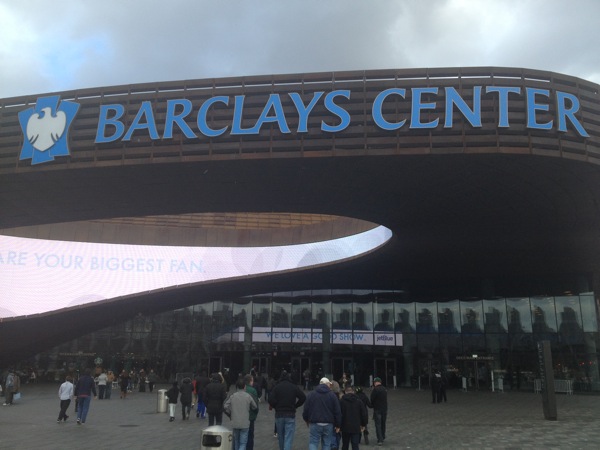 “Hey hey, my my. Rock and roll will never die. There’s more to the picture than meets the eye.” You know the lyrics. Neil Young made them immortal.

In an interview with Russia Today, Brooklyn Nets and Barclays CEO Brett Yormark said he’ll, “apply some of the same branding models” he used while transitioning the Nets from New Jersey to Brooklyn, when it’s officially time to bring the New York Islanders west to the Kings County. The process has already begun this summer with moving the business operations to Barclays, while the hockey operations team will stay intact in their current locations.

“Over the course of the next couple of years we’ll start the effort of transitioning the brand to Brooklyn to the extent we’ll look to Brooklynize them,” Yormark said.

And by Brooklynize, he means changing the franchise as we know it today, even though owner Charles Wang said the logo and colors would be untouched before this whole process began last year when the deal was announced to move the organization.

As previously reported by a number of media outlets, Yormark has instituted focus groups in Brooklyn and Long Island to study the addition of black and white to the Islanders’ color scheme to mesh more with how the Nets appear, “Brooklyn’s colors” as they’re often referred.

Touting increased ticket sales and merchandise revenue for the Nets, Yormark has a leg to stand on when he cites examples in successful growth from franchise movement year-over-year.

“We’ve engaged in some meaningful research,” he said. “Focus groups in both Brooklyn and Long Island, to understand the desires of the hard core fan, the fan that’s been with the Islanders for many, many years but we also need to understand what the new fan base for the Islanders would like to see in Brooklyn.

“My job is to make sure we can marry the hard-care fan base and the new fan base and to do appropriate branding that speaks to both. So we haven’t made any decisions yet, but I think it’s fair to say that black and white are the colors of Brooklyn. So the extent to which we can weave those colors into the current color scheme of the Islanders, I think that might make some sense.”

Yormark will assume the role as CEO of the Islanders, just as he currently occupies with the NETS and Barclays and with that will come this blending of franchises.

“We aspire to be a sports and entertainment company,” he said. “We will not look at the Islanders, or the Barclays Center or the Nets as separate or apart from each other. The question is how do we create synergies? How do we establish some influence in the market place? We’re going to look at it from one big lens as opposed to three lenses.”

As Yormark realizes, the real goal will be to encourage the Long Island fan base to commute to Brooklyn primarily on the Long Island Rail Road, a tall order even for diehard fans who have had season tickets since the 1970s.

“It’s a challenge we accept and the challenge is to give those fans making the commute a wonderful experience,” he said.

Perhaps changing, or adding colors to the Islanders uniforms will be counterproductive in their “challenge” of franchise assimilation. Perhaps it works to grab the Brooklyn crowd they seem to be craving on the ice. We’ll find out soon enough.

Yormark, a former VP at NASCASR, has had a proven track record in sports marketing, marrying the sports car giant and Nextel in a $700 million deal in the biggest deal of its kind before taking his current position with the Nets.

Hey hey, my my. The Islanders will never die. There’s more to this team than meets the CEO’s eye.