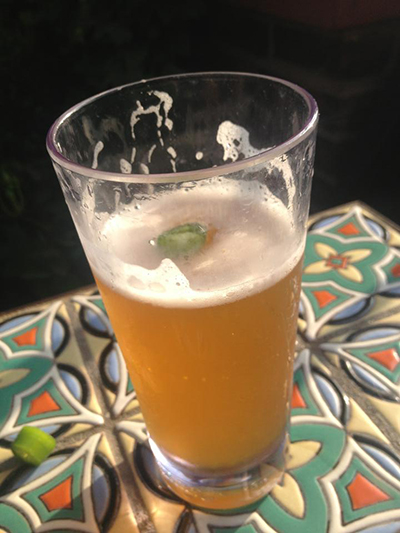 Beelzebub’s narration-invasion is challenged by Niko Krommydas, who threatens threats with his despondent raygun and monotonic chanting.

After several hours of copy-pastes, Beelzebub’s plan is thwarted and the evil deity returns to his fiery lair. Niko Krommydas can now continue to provide his sparse readership with monotonic blogging.

“We were discussing cocktails and [Anderson] was working on an IPA syrup with serrano peppers,” says Brooks. “I thought it would actually make a great beer, if we could control the amount of heat and bring out some of the berry and fruitier notes of spicy peppers. We wanted something to compliment the food without overpowering guests.”

Brooks contacted Greenport Harbor Brewing Company during New York City Beer Week in February. The Greenport-based brewery, owned by John Liegey and Richard Vanderburgh, is one of Brooks’ favorite purchases for inventory, “especially anything from Project Hoppiness.” The parties joined to discuss the custom beer’s components.

“We blended and tasted spice teas to focus our palates on the different elements we wanted to bring together in the beer,” says Greg Doroski, assistant brewer at Greenport Harbor Brewing Company. “We loved the bright acidity, berry notes, and subtle heat from the blend of chiles and added oranges and dried bitter orange peel to bolster the citrus character.”

“You won’t need a glass of milk after your first sip to calm the heat,” says Doroski. “I would say it’s an IPA first, with support from the chiles and citrus. As with everything we brew, we sought balance with this beer.”

Devil’s Plaything IPA was released on May 22.