Johnny Pierre sings as if he has swamp water in his veins. Among other things, he is the lead vocalist for the Biscuit Kings, a band known for biting swamp-blues and stripped-down Americana. Pierre simultaneously inhabits the roles of slightly unhinged frontman and back-room writer immersed in song craft. The Long Island music veteran (by way of New Orleans) continues to be inspired to make an emotional connection with the listener, even after nearly four decades on the local scene. “It is important what people find in the music… They are there to get joy or remember people or moments in their life, to even transcend,” Pierre said.

The 60-year-old Pierre, whose large personality seems to encompass both the professorial Cajun hipster and the amiable average Joe, has a rich musical history to draw upon. The Native American-inspired chants and Big Easy rhythms on Hambones & Trombones, the Biscuit Kings’ 2011 debut cd, trace back to his stint living in New Orleans from ages ten to twelve. “That New Orleans second line beat really attracted me… The music was overpowering,” he said.

His personal journey as a rocker is full of cherished reference points, representing different songwriting fashions and musical styles. In the ’70s and ’80s, Pierre was the hard-boiled frontman of the Freelance Vandals, a seminal Long Island-based, straight-up rock group that brought the adrenaline rush of Chuck Berry on steroids and a heavy shot of Little Feat’s boogie-funk exuberance to their gigs. Throughout the years, he progressed from writing rock anthems to the blues-based story-songs that are his current oeuvre. The Lindenhurst resident’s perspective on the blues has evolved. “I have a philosophy about the 21st century blues…it is not rooted in chord structure or 12 bars… It is about ‘life is hard’ and the sentiment… It is the underlying story,” he said. 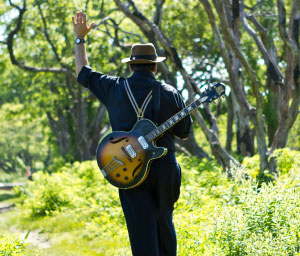 The 21st century blues on Hambones & Trombones, and his 2012 solo effort Prayers Before Sleeping, captures the vulnerability of some of Randy Newman’s most bare-bone narratives. There is also a heavy dose of smokin’ hybrids in which rock & roll and the New Orleans second line beat mesh. Vocally, Pierre is a bit of a chameleon. There are various shades of scorched honky-tonk and refried blues, which at times invokes Dr. John, Tom Waits and John Hiatt. “I recorded myself a lot when I was learning to sing.

Once I was comfortable with my voice, I worked on the nuances… I have been compared to John Hiatt, I certainly don’t mind that,” he said. The Biscuit Kings song, “The Day I Met My Waterloo,” is a Cajun jaunt that deals with life’s transitions. “It is about having a kid and not going back to one’s old life…and that’s a good thing,” he said with a laugh. The title song to his solo effort is a chilling Waits-like meditation of guitar and Pierre’s aching voice. With lyrics like “At the end of the day, I fall apart. Prayers before sleeping in the dark,” the song is as emotionally raw as it is simple.

The Biscuit Kings recently played at 89 North in Patchogue and have regular gigs at other local venues as well. Pierre keeps busy in between by writing songs for the band’s second album. Based on the rehearsal tracks, there will be at least one or two searing blues tunes of the more traditional variety that should sit well alongside the spicy hybrids. On the solo front, the fiction lover is midway through a song cycle that explores the life of ’60s hippie writer Richard Brautigan. “It is a musical biography reflecting his sensibility,” he said. Pierre is also writing with Freelance Vandals blood-brother Ray Finch. “There will be about three or four new songs,” Pierre said; that’s good news for long-time Freelance Vandals fans.

Pierre enjoys throwing out funny quips related to having reached the sixty-year mark, “I have an old prostate and a young heart.” The eternal student of songcraft is actually quite proud of his longevity and buoyed by all he has learned. “If I see a musician is a little old it means they have been around. They know what they are doing,” he said.