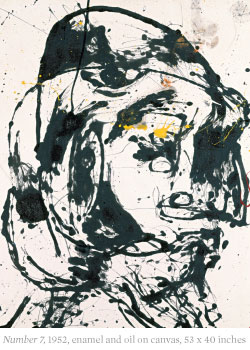 In Nassau, Levittown heralded homogenous suburbia, but out east, Jackson Pollock was in his prime making some of the boldest abstract statements in history. Parrish Art Museum is mounting a show filled with masterworks by Pollock and his cohorts, Angels, Demons, and Savages: Pollock, Ossorio, Dubuffet, an array of 50 paintings and works on paper. The show focuses on the cross-cultural commonalities between Pollock, Filipino-American Alfonso Ossorio and Frenchman Jean Dubuffet from 1948-1952.

There are no pleasantries for the viewer, the pieces are stark and interacting lines are the only compositional elements. Figures and faces can be discerned in some works, but they are stuck in vague representation in a world balanced between nothingness and chaos.

Also showing at Parrish around the same time is Platform: Josephine Meckseper. The legend’s works pop up in different areas of the museum and address the conceptual power struggle between artistry and consumerism.

Angels, Demons, and Savages: Pollock, Ossorio, Dubuffet will be showing July 21-October 27 and Platform: Josephine Meckseper will be on display July 4-October 14 at Parrish Art Museum in Water Mill. parrishart.org. 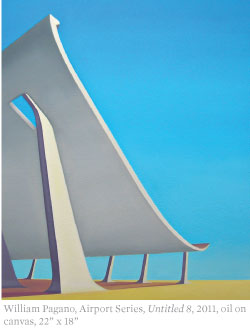 Here and Sometimes There

It all started when a child’s eyes were opened by the futuristic architecture of newly opened JFK Airport and the 1964/65 World’s Fair. That first step in evolution has (adult) William Pagano illustrating what is described as “Utopian minimalist American modern architecture.” Using photographs of buildings falling into that category with a look not far off from the local wonders of his youth, he removed every element until all that remained is line, shape and space. Meaning changes depending on the type of structure. Pagano conveys “idealized spectacle” for public venues and houses, “emphasize the structure’s primary function: Shelter,” he said. Traditional drafting tools impart precision onto the works, with occasional translucent oil paints. The result is the profound paradox that Pagano called “fusing representation and abstraction.”