Stepping into a suite of an Upper East Side hotel, I come face to face with the only artist ever to be inducted into the Rock and Roll Hall of Fame and Museum twice in the same year. In 1997, singer-songwriter and multi-instrumentalist Stephen Stills accepted his place among rock royalty for his pivotal roles in Buffalo Springfield and Crosby, Stills & Nash. The Springfield, which also included Neil Young, Richie Furay and Jim Messina among its members, revealed Stills as a musical genius. His eclectic blend of folk, rock, blues, jazz, country and Latin is unique in the musical universe, making his influence on popular music impossible to underestimate.

Now, I’m not one of those guys whose handshake is a bone-crushing display of strength, but it’s no cold and clammy claw either…just your normal, average, hey-how-you-doing-nice-to-meet-you variety. Time stops as I realize that the man whose hand I’m shaking is wincing in pain. “Hey, it’s not a contest,” he says through clenched teeth, leaving me absolutely mortified. Stills has carpal tunnel in his right hand, which he later explains.

With that inauspicious start, Stephen Stills and I sit down and begin one of the few interviews granted for the release of Carry On, a 4-cd boxed set featuring 82 songs from several of his projects, including essential recordings and 25 previously unreleased tracks spanning 50 years. From his earliest recording at age 17 to a live version of Dylan’s “Girl From the North Country” from CSN in 2012, a lifetime of creativity is anthologized with loving care and exquisite production with the help of Graham Nash and long-time friend and CSNY archivist Joel Bernstein. We spent our meeting covering as much ground as time and memory allowed…

Stephen Stills: [Laughter] You can tell I’ve been doing this all day. I get really acerbic by the end of the day!

Long Island Pulse: I know that you really don’t like doing interviews…
SS: No, I detest it, pretty much [smiles]. I don’t know, I thought Miles Davis was just great. He always scared everybody so bad nobody ever talked to him and that sounds great to me! [Laughter]

LIP: In compiling this boxed set, what was it like to revisit the earliest songs, the alternate takes and the unreleased material?
SS: I gave a lot of that to Graham [Nash] to do. Graham is the one who said, “Me and Joel [Bernstein] will do your boxed set.” I said well, you’ll do it with me, but if you want to go and pick some of the work, go ahead, because I was facing a room the size of this [sweeps arm around the hotel suite] completely full of two-inch tapes, so somebody had to go through all the awful stuff and the “before-we-learned-it” stuff and find the gems…so when they were prepared to bring me a set of choices, I would really listen to it.”

LIP: On the CSN 2012 dvd, you referenced three pivotal experiences from your youth that left an indelible mark upon your muse: Seeing the nighttime Zulu parades in New Orleans the night before Mardi Gras when you were six, being surrounded by salsa music when you were a teenager and the discovery of old blues music with your best friend.
SS: There’s a little piece of [that] in everything I do. All those blues records that we sat around listening to, we learned to play to Jimmy Reed, which is where everyone should learn to play lead. I found that I had that in common with my British guitar master idols; they all learned to Jimmy Reed, because that was the first thing you could play and it taught you how to keep a groove. 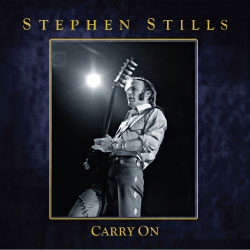 LIP: How did it feel hearing yourself hailed as a musical genius by the late Ralph J. Gleason of Rolling Stone for your work with Buffalo Springfield?
SS: My confidence just soared. You have to remember, I was really bashful except when we were at our business. But I was socially just completely inept and it just gave my confidence a tremendous boost.

LIP: Did you see the impact of the success following CSN and CSNY coming?
SS: One could only hope, but when the reality of it hit, I ran like a scalded cat. I went back to the racetrack and started galloping horses, just for something else to do, to get away from all those people who were so obsequious. It was a little teeny version of what The Beatles went through, but it was weird. Everybody was weird. Joni Mitchell wrote a great line about it in “Both Sides Now”…it’s about that moment when you look over and you’re famous and your friends aren’t.

LIP: The last time we talked (in 1994), you described how you felt about making music with David and Graham, saying, “The noise that we make when we open our mouths is a gift from God.” Do you have anything to add to that statement, or does that still sum it up for you?
SS: That’s true! That was true from the moment it happened in Cass Elliot’s house. I mean, it’s a combination of neurological accidents. I mean, [Graham’s] North of England Celtic thing with my little gravelly whatever the fuck it is and David’s Glenn Yarbrough smoothie sort of California crooner thing that all just sort of worked together instantaneously.

LIP: From a guitarist’s perspective, can you talk more about the creative process and how it feels to be at the top of your game, after 50 years?
SS: Well, if you’re Rick Rubin you spend a couple of weeks putting [guitar parts] down as overdubs. If you’re me, you can do it all in a day. You know when you start, and you know how long [until] it’s gonna end, and you let it tell you, and your guitar and you become alive. And then you look at the band and say, “We’re coming down now.” As a jazz musician, that’s how you play, that’s how it’s done. It hasn’t changed in a hundred years.

LIP: After decades of performing, how do you keep the “fun factor” intact?
SS: Keep changing the arrangement! People (may) think it’s odd if they don’t listen and then it annoys them, but if they actually listen, they find something new and fresh in it. You do the best {you can} and if it sounds good, and you’re really connecting, you bring it. It’s when you find your 99 mph fastball, you find the slot, and you can throw breaking shit, and you’ve got your whole bag, your arm comes alive, and there you go! And when it finally dies, you know when to take a hike! I’m almost there but only because it hurts. I’ve got carpal tunnel (in my right hand) and this is all getting withered. [Wraps his left hand around his right wrist] I couldn’t put my hand around my wrist like that ten years ago.

LIP: The coming year is looking to be a big one for you as the legendary 1974 CSNY concert at Wembley Stadium is being readied for release on cd and dvd. Recently, Graham Nash alluded to a possible CSNY tour to follow. Care to comment?
SS: Man plans, God laughs!

UPDATE: True to his blues-loving nature, Stills has teamed up with guitarist Kenny Wayne Shepherd and Electric Flag keyboardist Barry Goldberg to form The Rides, referred to by Stills as “the blues band of my dreams.” The Rides’ lineup is completed by drummer Chris Layton (Kenny Wayne Shepherd, Double Trouble) and bassist Kevin McCormick (CSN, Jackson Browne). The band’s debut album Can’t Get Enough will be released on August 27 by 429 Records. Featuring four co-written originals, covers of Elmore James, Muddy Waters, Iggy Pop & The Stooges and Neil Young, and an electric version of the Stills classic “Word Game,” the album celebrates the multi-generational appeal of the blues, captured live in the studio during the course of one week. “In the spirit of that simple, raw authentic ’40s and ’50s blues music the three of us love, we got in there and boom! A few takes and we were done,” said Stills. “The songs have muscle, they don’t sound dated or contrived; they’re very natural and organic. I can’t wait to tour with these guys and start recording again!” A world tour is scheduled to follow in September.

1945 – Stills is born in Dallas, TX to a military family and lives in several locations in the American south and Central America during his childhood.

c. 1953 – Stills gets his first guitar, he can’t remember whether it was a Kay, Harmony or Silvertone.

1965 – Stills unsuccessfully auditions for The Monkees.

1969 – CSN releases their acclaimed first album, containing two hits written by Stills: “Suite: Judy Blue Eyes” and “Helplessly Hoping.” They have toured and recorded together off and on for more than 40 years.

1970 – Stills releases his first solo album Stephen Stills, featuring the classic “Love the One You’re With” along with guest appearances by Jimi Hendrix and Eric Clapton.

1997 – Stills inducted into the Rock & Roll Hall of Fame twice in the same night for Buffalo Springfield and CSN.