In life, there are varying degrees of pressure. Anyone starting a new job experiences them. Then there’s the pressure Chef de Cuisine Ty Kotz is under. Handpicked by Tom Colicchio to open a $20 million Bridgehampton restaurant that has been under development for eight years, Kotz is in the culinary spotlight like never before as he runs Topping Rose House during its first full summer.

The pressure may be intense, but Kotz is a good cook who’s been at this awhile and has a kitchen behind him he trusts. “There are huge expectations but it’s not just on my shoulders,” Kotz said. “I have support from my kitchen, James Tracey, the Executive Chef for Craft [Colicchio’s other restaurants] and from Tom.” But meeting expectations—even the sort that come with a restaurant at an inn where rooms start at $950 a night—may end up being the easy part, the part he signed up for when he moved his family to the East End from Brooklyn. The hard part is fulfilling what he didn’t expect would be expected of him and that’s where the farmers, growing asparagus, peas and spinach just a mile down the road, come in.

Kotz describes Topping Rose House as “American farm-to-table cooking.” The idea isn’t new in the Hamptons, where casual food cooked a mile from the East End farms that grow the produce is common. But the buzz around this restaurant is poised to make Kotz, and his team, responsible for drawing attention to those farmers like never before and furthering the style of cooking that’s changing what we eat and when we eat it.

While no one will mistake the restaurant as a destination for vegetarians—they smoke their own bacon—vegetables are prized here. “All this wonderful produce that we’re getting from the area is the star,” Kotz said. “A fish is a fish, it’s something that somebody else can get. We’re getting these vegetables and produce that you just can’t get anywhere else.” Topping Rose House buys most of its produce from local farms, but they also have a one-acre garden at the restaurant that they turn to for inspiration. Kotz describes the garden with verve, the result of walking it daily, pulling this or that and tasting. Always tasting. That’s the only way to know if the baby carrots or lettuce are sweet enough or if they need a few more days to convert sugar. He picks what he likes then and there and that’s how the green salad comes together with such a balance between crisp, tender, bitter and sweet that it needs only the simplest of dressings.
“In my own garden I love that connection to the earth and growing things,” he said. “But out here, tons of people love it. I was blown away by the amount of small farms out here. And they’re so excited to have a place that’s giving respect to the ingredients that they’re growing.” The menu is so dedicated to the vegetables the latter generally gets top billing over proteins. An entrée would be listed as: Sugar snap peas, asparagus and saffron with grilled monkfish.
The abundance here, like the season in the Hamptons, is fleeting, but being at the mercy of what’s in season is a hallmark of farm-to-table. “I think we’re reverting to how food was, we’re not creating something new. And it’s still like this in other countries where people eat what’s in season because that’s what people around them are growing and our culture has gotten a long way away from that. I think people expect strawberries in the grocery store in the middle of winter and they don’t care that they’re flavorless.”
The contrast at the restaurant within a restored 1842 Greek revival mansion reveals itself in layers. On the surface the matte white walls and period appropriate trim are backdrops to colorful, modern art. The original, rustic, wide-plank pine flooring sits beneath sleek, contemporary chandeliers. Open the menu, the base responsibility of which is to tempt, inform and sell, and the third page is a simple list of the names of the local farms that grew the produce, fishermen who dug up the clams or the artisans who made the cheese. “I think you can just call up and stop by their farms,” Kotz said of the local providers. “Most of them go to the farmers market.” The cycle of commerce and sustainability loops nicely when a customer seeks out a farmer at the Sag Harbor Farmers Market or others that pop up between now and Labor Day. The servers at Topping Rose House are used to telling customers what farm the sweet tomatoes come from.

The move out east was natural for Kotz on several levels. After spending 15 years in New York City kitchens, two stops in particular shaped the Topping Rose House menu. Under Floyd Cardoz at Tabla, Kotz found someone to nurture his inclination to look at farms first. “He’s very passionate about local produce and using it in day-to-day food and constantly changing the menu to reflect that,” Kotz said.

Advancing his career in that direction isn’t much of a stretch considering he grew up in rural parts of Pennsylvania and Ohio, where his mom always kept a kitchen garden and he worked on farms in high school. He refined his technique with a two-year stint with Laurent Tourondel. How does that translate to the plate? Pork skin so crisp it cracks like a brittle piece of caramelized candy over the moist meat it hides. It’s paired with baby bamboo shoots that crept into the restaurant’s farm from a neighboring yard, roasted to a subtle sweetness.

He hopes the setting provides a similar simplicity for his family. “My daughter is young so this is perfect,” he said of their new surroundings. “We have a backyard and a dog and she goes horseback riding and does karate.” Kotz and his family had a smaller backyard in Brooklyn but “you can let down your guard a little bit out here but in Brooklyn, you always need to be watching because the world is at your front door.” When he visits local farms he sometimes takes his daughter along. She plays with the chickens while he talks business.

At every step Colicchio, Kotz and the kitchen know what the restaurant should serve, even if the menu changes daily. “His whole philosophy is technique, cooking things properly, paying attention to the ingredients and allowing them to speak for themselves,” Kotz said. Sending dishes out that match the level of craftsmanship and detail that echo throughout the Topping Rose House project is why he’s in Bridgehampton. But there might be a bigger goal on the horizon: “In a sense, we are the voice for the local farming community and a chance for them to get the word out there that there is all this cool stuff around us.” 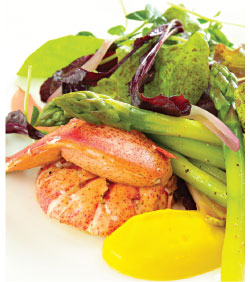 ASSEMBLE THE SALAD: Toss the greens, cooled asparagus and a tsp. of pickled vegetables in a bowl with lemon juice, salt and pepper to taste. In a separate bowl toss the lobster meat with enough olive oil to coat, a tsp. of lemon juice, salt and pepper. Arrange the lobster meat on plate, then add the salad and top with the picked vegetables. Add a scoop of the orange purée on side for dipping.

FOR THE ASPARAGUS: Boil a pot of water with 2 tbsp. of salt, or until the water tastes like seawater. Fill a medium bowl with ice water. Cut the spears about 1 inch up from the root. Peel the stem from just below the tip to the bottom. Plunge the asparagus into the boiling water for 30 seconds, then cool in ice water.

FOR THE LOBSTER: Boil enough water to completely submerge the lobster to boil. Then fill a bowl large enough to hold the lobster with ice water. Boil the lobster for 1 minute. Remove lobster from pot and submerge it in the ice water; keep the water boiling. When cool, remove the claws at the joint closest to the head. With a twisting motion, pull the tail away from the body. Put the claw and tail meat back into the boiling water. Remove the tail in 5 minutes and the claws in 5 1/2 minutes to the ice water. Once cooled, remove the meat from the shell.

FOR THE ORANGE PUREE: Remove orange skins and use a pairing knife to remove any white pith from the skins. Juice the oranges and set juice aside, about 1 1/2 cups. Place the peels in a 2-quart saucepan with cold water and bring to boil over high heat. Strain the water and discard. Refill the saucepan with cold water and repeat the process a total five times with cold water. Remove peels after the final time and dump the water. Combine 2 cups water and 2 cups of sugar in the same saucepan and heat to create a simple syrup. Add the orange peels to the syrup and simmer until the peels are translucent. Place peels in a blender with half of the orange juice and 2 tablespoons of the simple syrup. With the blender running, add 1/2 cup of olive oil the emulsion becomes the consistency of mayonnaise. Season with salt, pepper, orange juice, olive oil and syrup to reach a balance of sweet and sour.