“Give me solitude—give me Nature—give me again, O Nature, your primal sanities!” wrote Walt Whitman in Leaves of Grass. As Long Island’s greatest naturalist (and some might argue the world’s), Whitman boldly took himself back to the earthen roots of all he held sacred to resist the pressures of the increasingly mechanized, modernized, war-torn America in which he lived.

Today, on the back roads of East Hampton, a world away from the glitz, the attitude and the traffic of the jet set, textile designer/naturalist/visionary Jack Larsen quietly walks his own version of Whitman’s self-actualized path as he continues to cultivate his LongHouse Reserve, a sixteen-acre garden, sanctuary and evolving artistic/architectural experiment in what it means to live on one’s own terms. 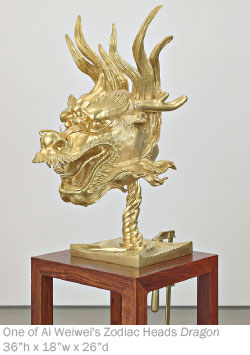 LongHouse, like Larsen, is inspired by the Asian aesthetics of broad simplicity and the conundrum of disparate harmony. The meditative state of the space makes for fine interplay with the high-art intellectualism that accents it. The labyrinths of walking paths are dotted with many a shady bench for quiet reflection and the gardens are a fine place to go to shut your brain off for a while—or they can also be jumping-off points for a dissertation on the intersection of ecology, botany, ornithology and art history.

Strategized stops along the route give way to an eclectic variety of sculpture. There are pieces that blend and borrow from nature. The most stunning example is the Red Garden where blooming azaleas and red maples frame the trompe l’oeil red posts that frame Isamu Noguchi’s Sunstone and pieces that remind us of our overbuilt, sky scraping selves (Sol LeWitt’s Irregular Progression High #7 mirrors our inevitable, industrial concrete ascension). In its totality, LongHouse Reserve is a study in macro-paradox and man’s endless search for harmony between progress and reverence for nature. Intended or not, LongHouse is a manifestation of our biggest existential battles; industrialization vs. naturalism, modernization vs. traditionalism, intellectualism vs. spiritualism, evolution vs. decay.

Above it all, birds make light of our grand confusion with their purity of flight and orchestral magic. Sitting by Peter’s Pond, one can slowly drift into the deep symphony of cardinals, larks, sparrows and blackbirds. While sitting on the veranda of Larsen’s Shinto-inspired residence (his home is also part of the artistic experiment; its vast and eclectic collection of artwork, furniture and volumes of books are open to the public at certain times) an Oriole fluttered carefree in a birdbath as executive director Matko Tomicic contemplated the space’s evolution.

“Everything you see on this property except for a few trees, everything was brought in,” he said of Larsen’s original vision, started in the ’70s. “What [Larsen] bought was an abandoned, overgrown potato field. Over time, he realized the gardens would not be enough of a draw to have repeat business. The art came as a natural addition, to somehow keep it interesting year after year, but not become a Disneyland.” 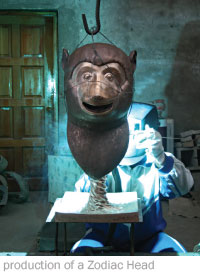 Wandering the grounds further, an insistent and communicative horde of crows seemed to light the way, cawing and circling in long arcs to and from the four corners of the reserve. Near Yoko Ono’s Play It by Trust chess set sculpture, Kreye Canyon yields to a small, but significant bamboo forest with stalks twenty feet high. Circling back to the main house, you’ll encounter Yue Minjun’s Contemporary Chinese Warriors, a bizarre and slightly unsettling meditation on the bravery of dissent and the horror of oppression.

It’s these subtexts that lead directly to provocative Chinese artist/activist Ai Weiwei, whom LongHouse will honor along with Lisa de Koonig and Richard Meier at the LongHouse White Night Benefit on July 20. Weiwei is a Chinese dissident who melds fine arts, architecture and social activism to create his own vernacular. His work is not appreciated by the Chinese government, who fabricated tax evasion charges and arrested Weiwei in 2011. Now out of jail, his passport was confiscated and he is forbidden from leaving his home country. Weiwei’s recent works reflect his ideologies and experiences as an activist, including a series of dioramas depicting scenes of his imprisonment in minute detail. Displaying and honoring the work of a highly controversial figure like Ai Weiwei makes a bold statement and LongHouse doesn’t shy away from that alignment.

“I think Ai Weiwei’s mind works across the world,” said Tomicic with matter-of-fact conviction. “I don’t think the issues he’s raising with the Chinese political structure are only present in China. They’re universal.”

But that’s right brain stuff, cocktail party and political fundraising fodder. For a seminal moment and in a space completely separated from sobering realities, you can turn your face to the sun and give thanks for the respite that LongHouse Reserve provides. With your eyes closed, head tilted back in the cool morning air, the dew still on the green grass, you’ll understand what Whitman was asking for when he wrote, “Give me solitude, give me Nature.”

The LongHouse Reserve is open to the public from April to October. They offer group tours, hosting for special events and youth outreach programs. For a calendar of events and other info, visit LongHouse Reserve at 133 Hands Creek Road, East Hampton or visit longhouse.org.