It could be a tugboat. It could be a tanker. Or it could be a fishing boat that would stop to pick up Marilyn Mahler when she raised a flag at the end of a long wharf and waited—as long as an hour in bitter cold—for any passing vessel to take her grocery shopping. Being the wife of the lighthouse keeper at the Fire Island Lighthouse from 1948 to 1954, before a bridge had been built, was “a challenging life, very challenging,” Mahler, now 86, said. Getting to the mainland during the months when ferries didn’t run was only part of it.

Her second son Godfrey, born in 1950, remembers his first home differently. “Everything there was happy,” he said. “We rode our tricycles around and around on the terrace, because we couldn’t ride on the sand.” When his older brother was driven to the island’s one-room school, sometimes in a Coast Guard Jeep, “I used to ride in the Jeep with him.” 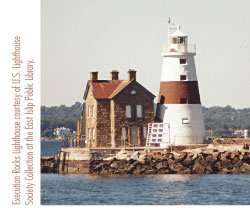 One reason many people are drawn to lighthouses is because a sense of mystery and of rich maritime lore surrounds the structures and the family life within them. The Huntington Lighthouse, which sits on a pile of rocks at the entrance to Huntington Harbor, was also isolated and sometimes scary. According to a story told by Pamela Setchell, president of the Huntington Lighthouse Preservation Society, during a cold spell one keeper’s family, looking in on their youngest member, found the baby’s blanket frozen stiff. Fortunately, Setchell said, the baby was okay. Another keeper’s daughter hated living there so much that “at age 102, she wrote that her life began at 17, when she was allowed to leave.”

A story from another resident is more light-hearted. During his early-1900s stay, there was no indoor plumbing, only an outhouse on stilts hanging over the rocks. “The keeper said he could do his business and fish at the same time,” Setchell said.

Long Islanders intrigued by the rough times and the romance of lonely towers have many lighthouses to contemplate. “Suffolk County has the most of any county in the United States and Southold town has the most of any town in the United States,” said Carol House, president of the Long Island chapter of the United States Lighthouse Society. Altogether some 30 dot the shores and waters, though keepers don’t live in them anymore. The blinking lights—each one in a different pattern, each one a warning—are now automated. The U.S. Coast Guard oversees the signals, though the buildings are often owned by nonprofit or governmental groups trying to preserve them. In a few cases, they’ve become private residences. The most prominent purchaser is Segway inventor Dean Kamen, who bought the North Dumpling Lighthouse near Fishers Island in 1986.

Credit George Washington, at least in part, as the father of Long Island’s bounty, said House. “When our founding fathers took over the country from the British, they wanted New York City to be the country’s financial capital, not Boston as the British had it,” said House. That meant providing a safe gateway for commodities entering the Port of New York for trade. “Hence the New York Stock Exchange, and hence the Montauk Lighthouse,” the first to be completed, in 1796, after Washington signed a 1792 bill providing federal support.

Eatons Neck—still operating as a U.S. Coast Guard station at the entrance to Huntington Bay came next, in 1798. Then came Little Gull Island (near Fishers Island) and, in 1809, the Sands Point Lighthouse, according to Robert G. Müller’s 2004 book, Long Island’s Lighthouses: Past and Present. Despite modern inventions like GPS, House said, any mariner, whether guiding an ocean liner or a rowboat, “will tell you that lighthouses are the most wonderful sights in the world.” They have also been used as ham radio stations and, during World War II, as spotting towers for low-flying planes.

George Washington also played a role, local lore has it, in the creation of the Horton Point Lighthouse in Southold, said John D’Angelo, a former docent at the lighthouse’s museum. “In 1756, he was out here on a trip to Boston, and he stopped in Southold. He met with a young man who was a lawyer here, Ezra L’Hommedieu,” D’Angelo said. Washington supposedly visited the point and discussed with L’Hommedieu the need for a lighthouse at the location, which came to be known as Dead Man’s Cove. Though commissioned by Washington in 1790, construction of the 58-foot-high square white tower and attached dwelling didn’t begin until 1857, a full century after GW’s visit. Like several other lighthouses, it was replaced by an automated light in the 1930s and fell into disrepair. Now it belongs to the Southold Park District, which has helped save it.

Restoration is a salient topic for lighthouse enthusiasts. House, a scientist who worked on Plum Island many years, said preservation of the lighthouse on Plum Island, placed on the National Register of Historic Places in 2011, is “an ongoing story.” Its handsome 1897 lens, with original prisms, is on display at the East End Seaport Museum & Marine Foundation in Greenport. That foundation is responsible for the 1990 rebuilding of another lighthouse, on Long Beach Bar, which was burned to the ground by vandals in 1963. Originally built in 1871 on a pile of rocks, it has long been known as the Bug Light because the stilts around its foundation makes it look like an insect.

The Huntington Lighthouse, already made safe for visitors, looks more like a miniature castle on the water. But restoration is an ongoing battle, said Setchell. Hurricane Sandy caused damage, as have waves created by increased recreational boating. The preservation society is now raising $250,000 to match a federal grant it received last year to bring in 650 tons of granite boulders to bolster the foundation so the 1912 building “hopefully will last for another 100 years.”

Müller said he’d also like to see the preservation of the lighthouses at Execution Rocks, on a dangerous reef north of Sands Point (where the British reputedly killed prisoners during the Revolutionary War), and Race Rock, built off Fishers Island in treacherous waters over six years at a cost of $278,716 (in 1870s money) and several lives. “It’s a brutal place out there,” he said. “But it’s important partly because of that dangerous waterway.” Both are on the National Register.

Michael Leahy heads the lighthouse society’s committee to save the structure, located in Cedar Point County Park on the northern shore of East Hampton, which was destroyed during a 1974 fire. They’ll need around $2 million and are hoping to turn it into a bed and breakfast. “It’s worthwhile to restore it,” he said. “It’s part of our maritime history.”