In 1967, Jorma Kaukonen was at the heart of the psychedelic awakening. As a founding member of Jefferson Airplane and a core part of that historic San Francisco scene along with Ken Kesey, Owsley Stanley, Bill Graham, Jerry Garcia, Janis Joplin and others, Jorma’s groundbreaking blend of folky blues and acid noise blew the doors of perception wide open for an entire generation and beyond.

From there Jorma’s storied life and career has been a twisting, turning tour of many worlds real and imagined. He ditched the hardcore psychedelic scene rather quickly, leaving Jefferson Airplane in 1972 with bassist Jack Casady. For four decades, his various incarnations of Hot Tuna have given music purists of all colors their necessary dose of finger-picking ragtime, traditional blues ballads, tongue-in-cheek melancholia and swingin’ rock ‘n’ roll.

On the way to Meigs County in Southeastern Ohio, winding through the Appalachia of Cumberland, cruising through verdant hillsides and valleys dotted with livestock, horse fences and wonderfully dilapidated barns, it seems to me as though Jorma has cut the path himself. This journey leads visitors to the gold he holds at the end of the rainbow: Fur Peace Ranch, 119 acres of idyllic Americana, his “ranch that grows guitar players,” nestled amongst cozy wood cabins, breezy meadows, a running stream and enough clean air to make a musical pilgrimage memorable and a spiritual renewal inevitable.

That’s the vibe that Jorma and his wife/partner Vanessa were intent on creating when they established Fur Peace in 1989. Vanessa is the driving force behind the nuts and bolts of the Fur Peace experience; with a core team of dedicated staffers and esteemed teachers, she’s humbly responsible for both vision and execution.

“How do you elaborate on divine intervention,” smiled Vanessa as we sat in the Fur Peace kitchen and discussed the ranch’s beginnings. The kitchen crew moved around us as they worked up a savory salmon and corn bisque. “Jorma got a call when we were living in Woodstock from a really old friend who was selling some land. Jorma hops on a plane. Three days later he has a deed. I wasn’t prepared for that. Even the word ‘Ohio’ felt like isolation to me. But little did I know that it was the window I needed. When I first saw it I couldn’t catch my breath. Two years, three years later…everything happened like a flood.”

“Everything” is Fur Peace’s weekend-long guitar-centric retreats with classes taught by Jorma and other guitar luminaries, as well as weekend concerts in their acoustically ideal live venue, Fur Peace Station. Most recently, the Psylodelic Gallery has also been completed. It’s a thorough and thought-provoking chronicle of the ’60s wrapped neatly in a renovated silo lined with fresh pine and hundreds of cool artifacts from the man’s life and times.

Sifting through memorabilia and organizing it for public display would tempt anyone to take a peek in the rear view mirror and reflect, but Jorma doesn’t go in much for nostalgia. He’d rather keep on truckin’ in his own yeoman-like way, taking his hard earned wisdom with him as he forges ahead. 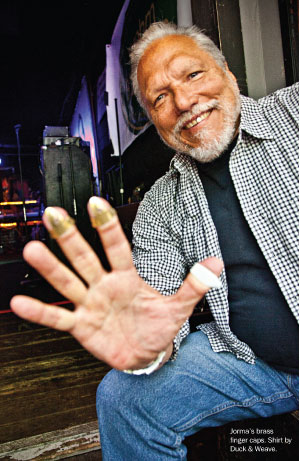 “Nostalgia in some respects presupposes the desire to go back,” he said. “And I’ve been to a lot of great places. But I like who I am today. The synchronous aspects of [the ’60s] were a really brief window in time and they were really powerful. It’s not that it was a better time back then, because it wasn’t. But it was certainly interesting. Things now aren’t better or worse, they’re just different. But it was an extremely entertaining period.”

To dig Jorma today is to catch his latest incarnation of Electric Hot Tuna as they hit the road this summer, with a headline gig at the Great South Bay Music Festival on Sunday July 21st. Another way to catch him, if you have the good fortune to make it to Fur Peace, is to sit next to him in a cozy rocking chair on the porch after a downpour, with the steam rising off the distant meadows, larks and cardinals darting about in the dissipating haze.

As he waxed joyfully on everything from his daughter’s piano lessons to his personal recovery and renaissance, to Judaism, spirituality and good potato salad, it occured to me that Jorma’s blues are unique due to his sense of humor. While his playing can quickly become dark and mysterious, intricate and absorbing, it’s never morose. He’s a technically imaginative and ridiculously competent player, but it’s his dry wit that shines through in his performances. As the ultimate Jolly Roger, a pirate’s pirate, a true warrior of the road, all he wants to do is keep things cooking.

But for the moment, he was content to sit and talk with me, and it wasn’t entirely clear what was more fun: Listening to Jorma play music, or listening to him talk about music. His repartee was brisk, his insights razor sharp and authentic, a fountain of homegrown inspiration.

“The thread is unbroken,” he said regarding his role in the blues lineage. “The guys that I look back to, the patriarchs of my time, they’re with me all the time. Reverend Gary [Davis], [Ian] Buchanan, Brownie McGhee, Muddy Waters, all those guys…they were so important to us. They were a jumping off point and that’s the way it’s gotta be.”

I reminded Jorma that somewhere along that purebred line of the blues he took a detour to co-invent psychedelic rock. Turns out, like everything else at the time, it was Kesey’s fault. When Jorma auditioned for Bill Graham and the Airplane, Kesey was there with his now infamous Echoplex tape-looping device.

“It was just seductive,” he confessed regarding Kesey’s acid electro-weirdness. “I thought ‘that’s fun… maybe electric music isn’t so bad,’ because I had this pretentious, bullshit attitude toward all that stuff at the time. But music is music of course. So rock ‘n’ roll was very seductive and one thing led to another.”

Eventually Jorma took his guitar out of the case to dig on a new fingering he’d stumbled on lately. As he sang and played a few bars of “Workingman’s Blues,” not only was I immediately transported, but so was he. It only took two bars to see him light up like a kid. Jorma’s singing voice was still the blizzard and the blanket, the blistering sun and the shade. He crooned, croaked and whispered by turns as his hands worked their mud-steeped Mississippi magic. As he noodled and explored the fretboard, his roving intellect, devilish gold tooth grin and piercing blue eyes all came together effortlessly to create acoustic magic. In the time it took to strum two chords, I was at the foot of the master.

“Teaching’s great…seeing the excitement when somebody gets what you’re trying to explain,” he said. “We’re each little self-compelled universes. When you pass on, that universe is done. So it’s nice if you have something worth saying, you might as well say it and hope it carries on somewhere.”

After the porch hang, Jorma and I took a short walk on the ranch grounds. We talked about Kerouac (“Never met him, but Allen Ginsberg pinched my ass once.”). His motorcycle ride with Hunter S. Thompson (“We were airborne. That’s the last time I ever rode a motorcycle with someone else driving.”). And his anticipation of this summer’s tour (“I gotta get back on the road so I can get some rest.”).

We laughed and walked back, our time winding down.

“I’ve always loved your take on ‘I Know You Rider,’” I said.

“There’s something about D to C that’s just…” I trailed off.

“That’s how it goes, you know,” Jorma said with a sudden bounce in his step. Ever the teacher, but ever the eager student too, sharing boundless secrets.

Jorma turned and looked at me. His smile wide, his eyes alight. I felt his warmth, his greatness, his pure and timeless conveyance of the mysterious and wonderful alchemy that is music, available to all of us if we seek it.

“Right on,” he said. Then he gave me a hug and was gone, off to play a gig in Boulder with Steve Kimock.

Got Jorma?
Because he’s first and foremost a finger-pickin’ bluesman, Jorma Kaukonen’s prominent role in rock history is sometimes overlooked. Consider this:

As an original member of Jefferson Airplane, Jorma was a central figure in the psychedelic explosion of the late ’60s and early ’70s, giving seminal performances at the Monterey Pop Festival, Altamont and Woodstock.

Jefferson Airplane’s first gig was at the Matrix in San Francisco on August 13, 1965, featuring Paul Kantner on vocals/rhythm guitar, Marty Balin on vocals and Jorma on lead guitar. Two years later, the Airplane’s breakthrough album Surrealistic Pillow went gold and peaked at #3 on the Billboard charts.

Jorma’s signature composition, “Embryonic Journey,” was written in 1962 at a guitar workshop in Santa Clara, CA. It appeared on Surrealistic Pillow in 1967. Over twenty five years later, in 1993, he recorded an entire album of multiple versions of the song with one time Grateful Dead keyboardist Tom Constanten.

You can hear Jorma accompanying Janis Joplin on the historic, yet obscure “Typewriter Tapes,” recorded in 1964. The tapes are archived at the Fur Peace Ranch Psylodelic Gallery.

Jorma was inducted into the Rock and Roll Hall of Fame with Jefferson Airplane in 1996.

He continues to write and record. His latest solo effort River of Time was released in 2009 and Hot Tuna, his steady band since 1969 with a few breaks in the ’80s, released Steady As She Goes in 2011. Both were recorded at Levon Helm’s studio in Woodstock.