A do-it-yourself alternative to traditional venture capitalists, Kickstarter provides a platform to raise money for creative projects—film, music or the construction of a gigantic monument of RoboCop—by connecting people with the funding for their dreams, a few dollars at a time. The revolutionary crowd-funding website has recently influenced starters on Long Island too, as four parties successfully used it to secure enough money to kickstart their goals.

While each project differs, all are connected by the desire to progress Long Island’s artisanal culture. Whether planting seeds, raising livestock or brewing fermentables, these folks are handcrafting their dreams with a little help from millions of Kickstarter users. And dreams are a beautiful thing. 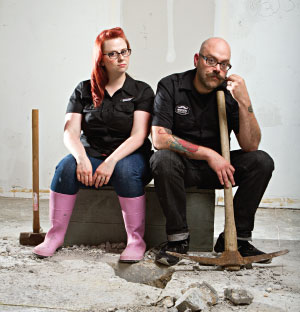 A tree may grow in Brooklyn, but a moustache is currently sprouting in Riverhead. And it likes beer.

Lauri and Matt Spitz started homebrewing in 2005, creating small batches of beer in their Islip Terrace kitchen using a stove, various cookware and novice-level internet recipes. Though initial results were only semi-drinkable, a casual hobby transformed into hardcore adoration and the couple progressed to brewing 70-80 gallons per month (three batches per day, at times) and serving their beer at local festivals with homebrewing club Long Island Beer & Malt Enthusiasts [LIBME]. The taste improved, too. As craft beer continued to infiltrate Long Island and existential crises amassed (“I hated my job and was questioning everything in my life,” said Lauri), the prospect of opening a brewery not only seemed appropriate, but essential for fulfillment. They just needed some initial capital.

“Our friend used Kickstarter for his documentary and really liked the personal connection,” said Matt, whose perky handlebar moustache is the brewery’s insignia. “We had a lot of people who wanted to support, but couldn’t back us with piles of money. This was perfect because they could donate even just five dollars. It’s like a PBS pledge.”

After contributions from 534 supporters, Moustache Brewing Company reached, and surpassed, its $25,000 goal on Kickstarter. The funds helped secure a location in Riverhead, joining Long Ireland Beer Company and Crooked Ladder Brewing Company as town beer-makers, and will handle rent until permits are acquired and the brewery opens “sometime in 2013,” said Lauri. While kitchen-brewing won’t be necessary in Riverhead, Moustache’s one-barrel operation, capable of producing 31 gallons of beer per batch, will start with two former homebrewing recipes: Everyman’s Porter, a rich pour of chocolate and coffee, and One Drop Pale Ale, a citrusy beer constructed for multiple-pint consumption. 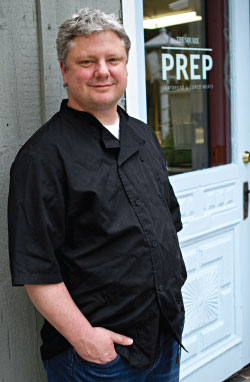 Before sous-chefing for The White House during President Bill Clinton’s first administration and receiving a James Beard Foundation award at Chicago’s Spruce, Keith Luce started on his family’s 20-acre farm in Jamesport, using the arable milieu to establish a commitment to creating dishes with a sustainable soul. After leaving his proprietor-chef position at Jedediah Hawkins Inn in 2012, Luce employed the farm, and Kickstarter, to address the lack of locally, humanely raised charcuterie on Long Island. He believes curing, food preservation and preparation often involving smoking, and the addition of salt, sugar and nitrates is integral for the continued evolution of the Island’s burgeoning food scene.

“We are blossoming with produce and seafood, but raising meat has always been a challenge on Long Island because we lack certain facilities,” Luce said. “I’ve always wanted to bring charcuterie to the area, so this was the perfect time to build a curing house.”

Luce, with a herd of 30 Mangalitsa pigs raised for two years on vegetables, potatoes and spent grain from Greenport Harbor Brewing Company, successfully utilized Kickstarter to “generate some buzz and lessen the financial burden” for curing essentials such as grinders, stuffers, smokers, cases and aging space. He performs all duties at Greenport’s The Square, formerly Sterling Square, which he purchased through his company NoFo Hospitality Holding, in March. The Square includes a restaurant, café, tasting room and curing facility.

“I really believe in social media and Kickstarter enabled me to feel the pulse of the community,” said Luce. “I knew the next step was the right one. Now the sky is the limit.”

Luce started with bacon because it requires minimal preparation and gradually integrated bologna, brisket, soppressata and other salumi. 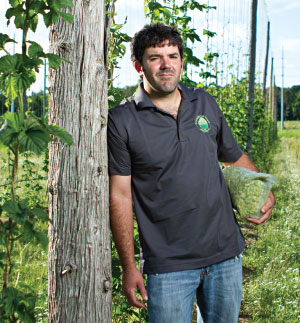 John Condzella wants to resurrect hop production in New York, so he started in his backyard. Literally.

A fourth-generation farmer on his family’s 20-acre property in Wading River, Condzella researched regional climate conditions and planted Cascade and Mt. Hood hop rhizomes in 2011. The female cones of a Humulus lupulus plant, hops are an integral ingredient of beer, providing bitterness to balance malt profiles, enticing aromas and overall preservation. While several local breweries created beer with his inaugural 850-pound, whole-leaf harvest in 2012 (Port Jeff Brewing Company used 40 pounds of Cascade hops for its Fresh Hop Ale), the time and manpower required for handpicking was overwhelming and “just not feasible if I was going to continue growing,” said Condzella. His solution was a Wolf WHE 170 Hopfen Pflückmaschine. Its name may ignite presumptions of a weapon frequently used by John Rambo, but the Wolf is actually a German hop harvesting machine providing farmers with plucking efficiency. And it looks badass.

“A hop bine usually takes one hour to pick by hand, but the machine can do it in 30 seconds,” Condzella said.

After a six-month search, Condzella located one in the Hallertau region of Germany, an area renowned for hop agriculture. He successfully completed a Kickstarter project in March to fund its purchase. Though his production will now increase to 1,800 pounds in 2013, Condzella’s objective transcends personal prosperity. He will also allow other local farms to use the Wolf to promote interest in growing hops on Long Island.

“I wanted to propel our farm into the next generation, but also wanted to help other local farmers who may want to start growing,” he said. “New York was once the hop capital of the United States. We can get back there.” 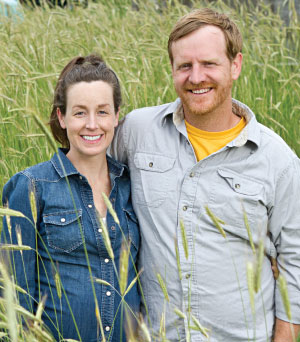 Chardonnay, pinot noir and merlot are grape varieties recognizable to any level of wine consumer, from the sniff-swirl-sip-spit sommelier to the college student funneling discount boxes with a stolen trombone. Regan and Carey Meador however, are not concerned with popularity. The Southold-based couple, bored with the monotony and unadventurous soul of mass-produced wine, are attempting to inject diversity into Long Island soil and expand its inhabitant’s palates with a vineyard of weird grapes. Though every grape variety possesses certain inherent qualities independent of appellation and vinification process, the eccentricity of Southold Farm & Cellar’s portfolio primarily stems from obscurity.

“These grapes don’t exist on Long Island so locals aren’t familiar with them,” said Regan, who is currently assistant winemaker at Osprey’s Dominion in Peconic. “It’s really safe to plant merlot and chardonnay as a new vineyard, but a lot of interesting things are happening on the North Fork. We want to keep people on their toes and educated on different grapes.”

After acquiring and renovating a 24-acre farm in 2012, Southold Farm & Cellar started toe-keeping by planting four grapes in May: Teroldego, lagrein, goldmuskateller and syrah. Since initial costs were “outrageously expensive, especially with unknown varieties,” said Regan, Kickstarter was an obvious choice to generate interest and reduce the bill.

“I previously worked in digital marketing and saw the benefits of Kickstarter for filmmakers and musicians,” Regan said. “Before we planted, we wanted to start the conversation and get people involved from the beginning. It was great exposure.”

Though certain concerns remain, the first-time growers are confident in Long Island’s wet, temperate climate and the versatility of the grapes.

“There really isn’t another place like Long Island for growing things,” Regan said. “We have varieties that can produce supreme rosé one year, and super dark reds for the next. We’re not trying to chase after the same thing.”