Long before the tech boom. Long before cities, skyscrapers and the great industrial and art revolutions that have defined the past two centuries, humans have made things out of wood. Be it idyllic carvings of bodhisattvas of the Jin Dynasty, Maori oars, or the good old-fashioned North American walking stick, the primal urge to create started with wood and continues to enchant the human imagination today. Perhaps it’s the malleable quality of the substance. Perhaps it’s the striations and rings and overall aesthetic. Perhaps it’s the undeniable fact that this matter was once alive and lived and breathed and existed in the world so unlike stone and rock and so much like us. On the timeline of explosions and tectonic shifts and lava, thunder and rain that has shaped our planet, wood and humans have found a little spot to coexist and dance a memorable dance to music that doesn’t show signs of letting up.

I recently spent some time with three makers who have roots on Long Island. To call them craftspeople would be somewhat appropriate, but what they do has a more far-reaching and accurate nomenclature. These three undeniable artists work with the incredible medium of wood. They make art out of trees that functions in the world of humans fluently. Their work stuns us with its design while providing a practical function and service in the universe, and we’re lucky for their making. 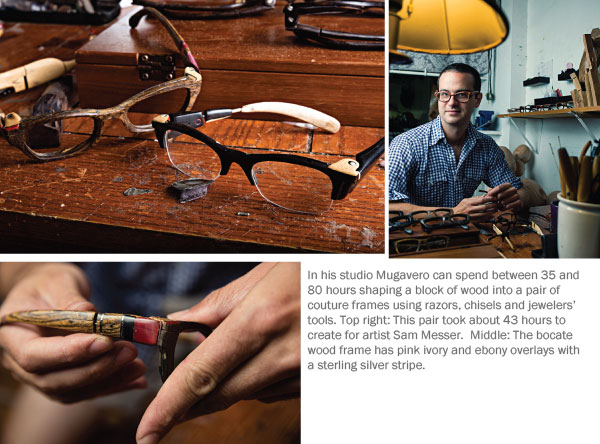 Adam Mugavero
Fort Greene’s Adam Mugavero spent the better part of his youth building fires and windsurfing on the shores of Sound Beach. A true Renaissance man, Mugavero made a heartbreakingly beautiful album of songs that resonated deeply with listeners and critics while exploring his propensity to make art through the lens of a songwriter before taking to sculpting. “This is where I come from,” Mugavero said in reference to his wooden sculptures. Some are fashioned from fallen trees in Fort Greene Park and others are reminiscent of the images of Long Island’s north shore. “I needed to do the sculptures in order to get to the frames.”

There are, in 2013, a few designers making frames out of wood. But here’s what separates Mugavero from the rest of the pack. He is making art that is as at home on your face as it is on a museum wall or in a gallery. Mugavero’s inimitable sculptural eyewear is what it is because his hands are on every piece of work that leaves his studio. It’s an exhaustive and brilliant operation that is just starting to find its way into the world. People are noticing.

When browsing the high-end retailers across Long Island and New York City that carry his work, it is not uncommon to find Mugavero’s frames deftly displayed not on some glass shelf unit with other designers but rather alone on a piece of wooden sculpture designed by the artist himself. It’s as if his work belongs there, co-mingling with the contours of the form and born out of a desire to create and transform the world—to see differently. 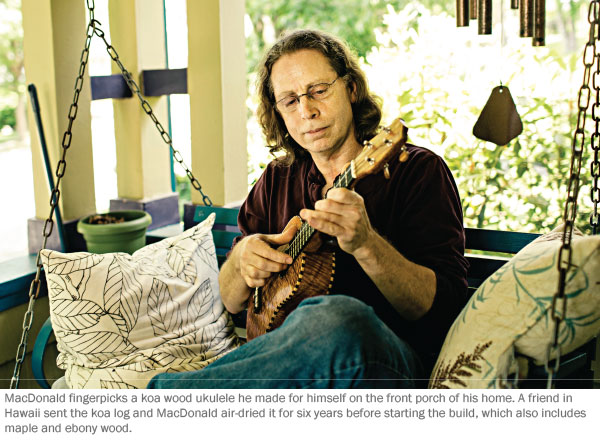 Scott MacDonald
Guitar maker, absinthe scholar and longtime Huntington resident Scott MacDonald is very fond of trees. “A guitar is a reincarnation of a tree,” he said. The Kwanzan cherry tree in the front yard nods in agreement when the wind blows. The chimes on the porch concur. The whole scene is somewhat magical, like out of a dream. “Its wood…you can listen to it and it speaks to you and fights you and cracks and bends like people.”

In addition to delivering profound similes, MacDonald has been making arguably some of the most beautiful looking and sounding guitars in the area for 22 years since that first banjo was constructed amidst college mischief and late night ingenuity. His inclination to create seems innate and is charged with a robust fascination with the human condition and how we grow and change and evolve as people. He is a philosopher at heart (“Success at anything is paying more attention”) and a devoted father, and, indeed, there is a kind of parenting process with each guitar he makes.

“When I’m making a guitar for someone, I try to get a feel for who he or she is,” MacDonald said. “I want him or her to be a better guitar player when playing it. I want songwriting to feel more sacred.”

There is a give and take at work here too because the more MacDonald builds the perfect guitar for the customer, the more he sharpens the skills necessary to be a better person for himself. In this way, the guitars and guitar making become symbolic motifs in the novel that is the maker’s purpose in the world. And is there any greater or more noble ambition than that? To allow our life’s work to better us and bring meaning to others whether it be song or solace or, for MacDonald, both? 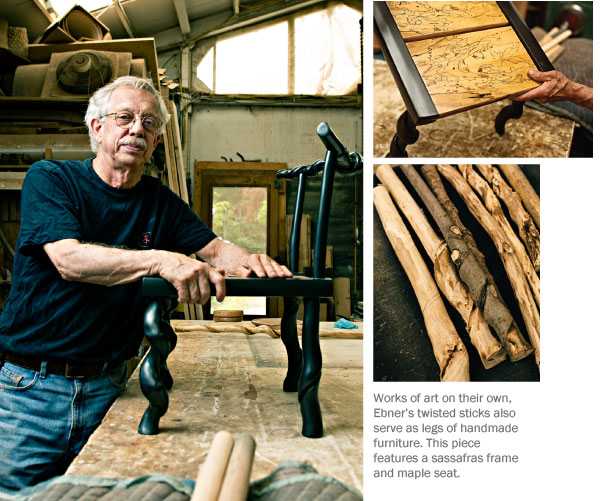 David Ebner
“Wood was always the draw,” David Ebner said. He started working with wood as a kid making baseball bats and eventually shaped his vision of woodworking in a studio on the south shore in 1973. The playful inclination that was the impetus for that first construction might still be at work today, for Ebner’s sculptural furniture and turned objects exude a lively spirit and love for the endless possibilities to be had with the medium.

His father had some tools while he was growing up and early instructors in an industrial arts program inspired his interest. “Originally, I thought I was going to be an architect,” he confessed, and it makes a lot of sense. I like to think of Ebner as a small-scale architect. His work, which has been well exhibited and part of numerous prestigious collections and publications, is evidence of the master craftsmanship and artistic vision necessary for large-scale work. But it’s his love of wood that may have led him to where he is today. His signature “twisted sticks” use native materials—maple, sassafras and honeysuckle—and are user-friendly and easily-replenishable. “Once you get apt at the medium,” Ebner said, “you realize there are thousands of kinds of wood. The inherent qualities yield themselves to different applications.” The question then becomes not what shall I use but “what species” shall I use?

While it’s not financially feasible for Ebner to get his hands on every piece of art that makes its way out of his studio these days (he has helpers and assistants at this point in his career), he always makes the first piece for every new work he releases. When I asked him what he’s most fond of before the end of the interview, he responded by saying, “the piece that I’m working on today.”

It’s this kind of commitment to the present that will most undoubtedly create the antiques of tomorrow.