“this is just a surface…a visual representation of what the earth is doing at this particular instance: summer, autumn, whatever. it’s about life. and renewal.”

those visual representations of what seelbach is seeing around her are mostly oil, and lately she’s been experimenting with mixed media and found objects. they seem textural, even when flat, because they are not so in a tactile way. the primitiveness of the brushwork gives the sense of a cave drawing or a petroglyph in some far-flung place. she uses multiple perspectives—overhead and vertical at once. it’s about composition and rhythm, balance and painting. often, it’s also about “ghosts” that reflect the subject’s ancientness as well as its future.

“it’s very sort of elemental, these things. it’s about how nature works. but it’s about the force of nature rather than the prettiness.”

her style is closer to abstract expressionism though it’s derivative of representational painting. it starts with a stroke of color to break the white space “so you’ve started something. everything after that is responding to it…what are you going to do next to get to the feeling you had in the beginning? using this way of painting to get to the idea of something.”

the “troubled waters” series is a study of mutations that uses man made shapes. even if the viewer doesn’t know what they are, s/he understands they are representations of mechanical debris.

“first of all i’m making a painting—i’m not an activist or a scientist…i want to be as spontaneous as possible.” still, she’s making decisions. she’s tearing her surface to convey movement. she’s stenciling from waste to depict natural beings. she turns a straight edge on its side to offset the visual experience. there is permanence to her human marks because she’s connecting us to rocks and water and the edge of the planet forcing us to consider our bond to earth.

New works from Anne’s Troubled Waters series will be part of the NYFA—“MARK” ARTISTS show at the Islip Art Museum thru September 1st. 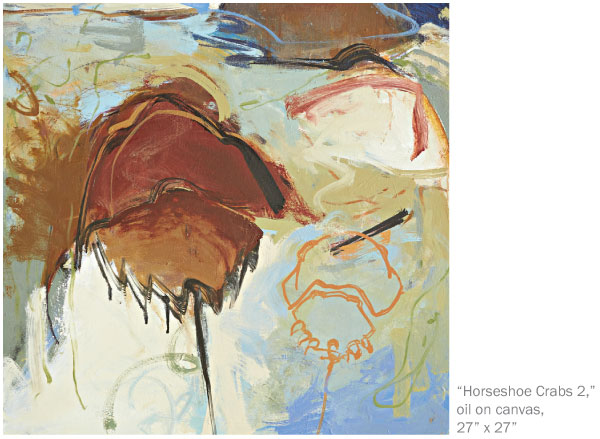