to define an artist by the tools he uses would be an oversimplification, no matter how huge a part of his renderings those tools are. goldberg thinks about our connection to computers and “as an artist it’d be foolish to not include that in my work.” but it’s not computer art. “my work explores the intersection of abstraction and technology.” he studied art formally but really cut his teeth as a graphic designer. using the one to push the other is the natural extension of an artist who is part painter part inventor.

influenced by japanese calligraphy (shodo) and that you can do something quick and gestural but do it over and over again until you get it “perfect,” he embraces geometry and precision. “a lot of my work is based around the idea of the gesture…the duality between expression and control.”

technology is his co-conspirator, he’s even modified printers to be able to run a painted canvas through in order to print a digital image on top of his painted one. the inverse is also true: he’s used the computer to put down the black lines and then fills them in with gouache or other paint. he’s also cognizant of a general skepticism in the art world towards digital art participating in a “fine art” dialogue. whatever winds up being a straight digital image, he signs “1 of 1” and destroys the file to legitimize the singularity.

“whatever tools i can use to come up with interesting results, i’m going to experiment with…it’s not just about the execution, it allows me to think in a different way.”

the japanese aesthetic, especially the calligraphy, figures into his work, as do many 20th century art giants. “the idea that there can be beauty in something that’s simple, that they don’t have to be ornate to be beautiful…a lot of what i do is really drawing—it’s just on a tablet.” and in his lab he’s embracing many forms, refusing to lock himself into any one modality.

he thinks a painting is successful when it’s mysterious, when you have to keep looking at it, which drives him in making amorphous figures. but he doesn’t believe in randomness—it’s about looking for answers, not having them. “trying to peel away the layers that aren’t important…if i can say to myself ‘i know what it is,’ then i’ve gone too far.” 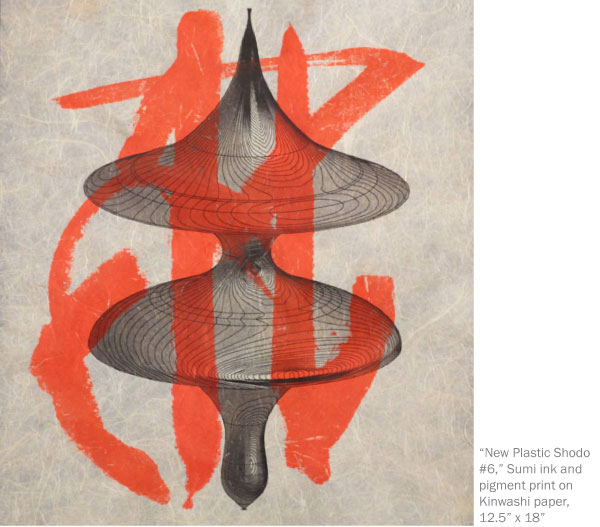