“they have to really sing. it really has to slam me.”

and sing her paintings do. full of life and love and energy. they are straight up rock ‘n’ roll, with the grit of janis joplin and the vibrato of joni mitchell at once. sloane’s process is extensive: layer upon layer upon layer of materials. she likes the purity of the square, as well as segmenting it. she is also “objectifying personally significant text as my texture…purposely going inside out. it’s not legible, it’s for me.” she adds, “like a pun, also” because of her personal struggle with written words.

and though she paints for herself, she’s also painting for her place among the giants of art history. and painting for what each work references unto itself, “i approach each work as a stepping stone to the next. my goal as a ‘grown up’ is to make my voice known so when someone sees my work, they know it’s mine…people respond to the color and energy. if you look at them long enough, there’s movement there. they’re contemplative works.”

sloane is an artist who’s been painting professionally since the early ’70s. she’s got new york city street side intelligence informing her academic education. her love of monochromatic tableaux and depth and “always wanting to paint with bright colors…wanting to do something minimalist but textural that very much had evidence of the hand” is legion to the endless artistic dialogue wrangling with the timelessness of simple geometry.

she built on top of that by pulling elements of texts, both personal and non, to create the depth that suggests writing. although it’s obscured to the point the viewer can’t recognize letters, she finds it to be an encouraging way to organize the texture of the work. she loves the “square in a square” as a motif for its cleanliness and timeless but also loves “the split because it relates to the purity of the square.” the square, alien in the natural world (as are some of the excessivenesses of her hues) is no less a part of nature when it stands there humming in full form, moving, looking back at you.

sloane believes “nobody makes art from nothing. it’s all referential…[still] i don’t know what the point is of making something that’s already there…i’m not making fluxist art.” and actually, yes, these works are about permanence. it has something to do with the stability of the square. and the writing, the connection all people have with mark making. it’s about being a stamp on the world. and they also make you feel good.

Louise’s work will be shown in the Gallery Sam booth at ART HAMPTONS July 11-14th. 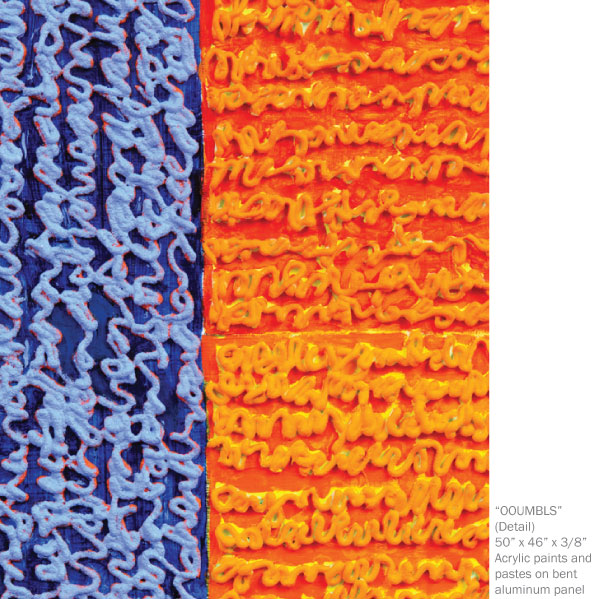