he’s not making art “just because.” that would be ego-driven.

when an artist has resolved himself to participating in a conversation that goes well beyond what is rendered on a canvas, you can expect his contribution to likewise be no laughing matter. his goal is elemental painting. smoke painting, strand pieces and stick painting all wind up being very different vessels all going to and from the same place: “to push painting.”

“i like work that is intellectually driven…i’m using smoke to challenge line painting like cy twombly who came before…the organic sensibility pulls people in. i’m not forcing my hand on anyone.” this is an artist who’s trying to take his hand out of things. and in fact those digits have been pretty well concealed. he’s using natural elements, like smoke embedded into a panel or gravity to pull the paint. for the latter, it’s all about “a way to suspend paint in a way that isn’t really part of painting” and it winds up being “somewhere between painting and sculpture.”

even though the renderings are very much the machinations of his consternations, “everything that i’m trying to do is really refinement, to break things down to their simplest.” the paradox is that though the actual process is additive—adding drips of paint upon drips of paint, or avalanching it on the canvas so it can trickle beyond the constrictions of the panel—satz is trying to break down and reduce and get to the most basic rudiments. panels might appear to be just some layers of paint, but they are in fact miniature capsules of life—peaks and valleys, rivulets building into stalactites.

works derive from other work or conversations with other artists, dead or alive. and they’re rebellious. he’s thumbing his nose at art history while participating in it, challenging stasis, status quo and established appetites from the inside out.

his “by-products” (strand pieces) are a meditation, not just a hotdog mash up of previous works. he’s “circumventing the whole idea of theft, of appropriating” by going into one painting with the intention of using it to make another. the “by-products” are evidence of the actions that have come before, though the secondary works are works in their own right.

“i’m not interested in revisiting something that has already existed in a way.” which is why you won’t see a typical landscape or figurative piece coming from satz. “that’s what i strive to do—to make important work,” he’s conscientious that his gestures (pieces) are statements contributing to a dialogue that spans far beyond this moment. “for me to do something, there has to be a reason. i’m not going to make a painting unless i can defend it.” 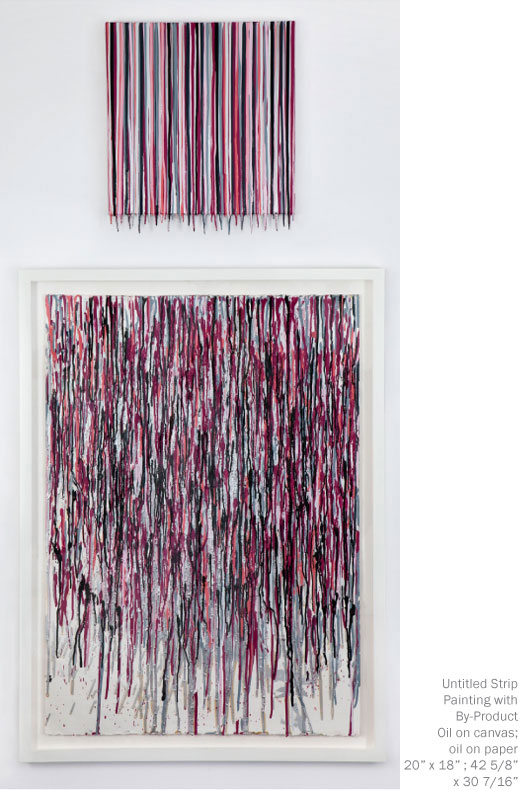