“of course! it’s in the genes! it’s settled, i’m not even going to try to fight it,” she said.

the funny thing about albertini shrugging off the explanation that her work is the perfect marriage—french intellectualism and whimsical american beauty—is part of the sense of humor this artist has about her work. and the sense of humor you get to enjoy as a result of it. she’s not trying to make you laugh, but she will because she likes to. this freedom that albertini has about herself, her work and life, is part of her fearlessness. “sense of humor is so important to me. if i took myself too seriously, i would not be open to the different aspects…[being] the stupid beast, being in love and pathetic…you have to explore all that.”

she grew up in paris spending weekends at the museums, her churches, developing a love of art history, “i kept it in me…you’re always influenced by other art or artists or a movement. but you have to turn it upside down. and put some humor to it.”

her studies of heads are derivative of classical busts, just as her larger headdresses are a nod to tribal headgear. she’ll reference matisse and picasso’s wit and uses the culmination to create her own world, “i hope my art has many layers. i don’t want to scare people away. i hope it’s beautiful and intriguing and inspirational. and i hope the humor grabs you in.

“my beasts, my creatures—they’re all me…it’s your point of view, so it’s your self-portrait [but] a work takes a life of its own and takes a step further. it evolves on its own.” the pieces are in conversation to/with each other. sometimes they’re adversaries and sometimes they’re friends. sometimes we as viewers are part of the dialogue and sometimes we’re just bystanders. and it is her courage to let the viewer decide how far s/he’ll let himself go and be in the moment that is particularly compelling. albertini is underway in her exploration and she’s studying the things about herself that are the most human components in all of us.

the thing you get from her art is that fearlessness is akin to shamelessness. the latter, though typically a dirty word, is also tantamount to freedom. and that’s the essence of what sydney albertini’s art is all about.

Sydney will be showing in …AND, ALSO I HAVE NO IDEA—PARRISH ROAD SHOW at Duck Creek Farm, 3 Mile Harbor, August 10th—September 2nd. 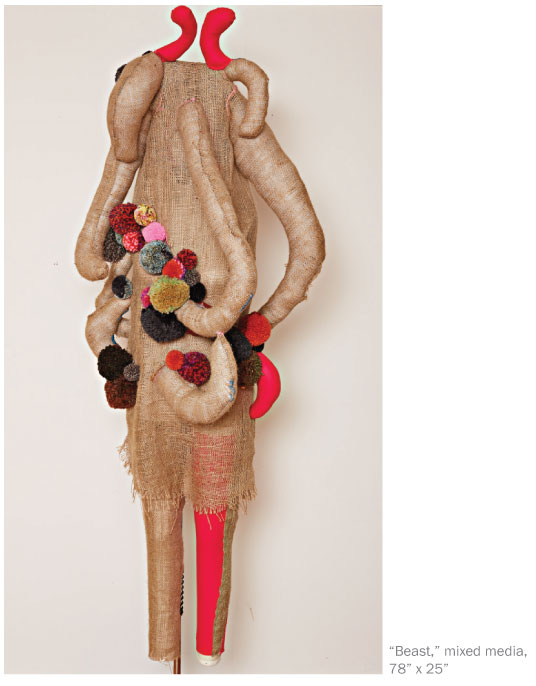