The Hamptons’ summer social season is packed with stars and style all in the name of charity and culture. Party with a purpose at these glamorous galas that prove summer is just a little hotter in the Hamptons. 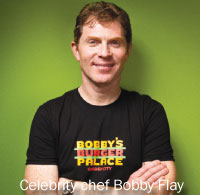 July 13th:
GOOD TASTE
Saturday summer soirees start to sizzle with Dan’s Taste of Two Forks. Fashionable foodies celebrate the best east end culinary talent by sampling delicious dishes and sipping local wines. Expect to see even more familiar faces under the tents at Sayre Park in Bridgehampton, as this year’s host (and Hamptonite) Iron Chef Bobby Flay and emcee Alex Guarnaschelli are sure to bring their famous friends and fans. This is the one event in the Hamptons where I recommend that you go hungry. Arrive early, last year the line to enter was long and the parking lot was packed. Head straight to the back of the tent and score a seat or save a spot at a picnic table. For guaranteed early entrance, purchase a VIP ticket that includes an invite to the champagne reception. Also be sure (as always) to have a designated driver. 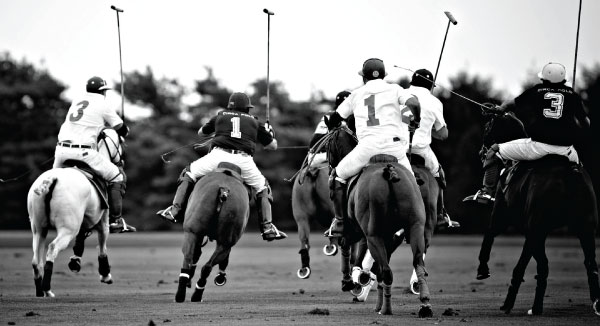 July 20th
POLO
Bridgehampton Polo Club is back for its 17th season. It’s known as the “Sport of Kings,” if you can snag a wristband for the invite-only VIP tent, you’ll see some stars (Star Jones, Donna Karan, Beth Stern, Kelly Bensimon, Nigel Barker and Veronica Webb) and reality royalty (Housewives, Kardashians, oh my) plus get your fair share of champagne and caviar. Or you can watch from the sidelines for $20 per car at the gate and still enjoy a great game (and a glimpse of gorgeous Nacho Figueras) and my favorite people watching (extravagant hats everywhere!) and divot stomping at half-time. You can even pack your own picnic. Bridgehampton Polo is at Two Trees Farm for six consecutive Saturdays, July 20—August 24. Although you may be tempted to wear your best shoes, remember the parking field is dirt!

Rock the Dock, the Bay Street Theatre’s summer benefit bash, is nestled on the Long Wharf in Sag Harbor. Enjoy the waterfront and admire luxurious yachts with Long Islander, soap star and event host Susan Lucci. In recent years, Mario Cantone, Kim Cattrall, Blythe Danner, Naomi Watts and Liev Schreiber have mixed and mingled to support the theatre’s yearlong programming. After the sit down dinner, dancing and live auctions with Richard Kind, the after party moves to B. Smith next door! Tickets are $550 for the main event and an additional $150 for the after party. 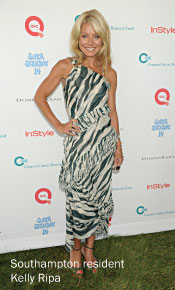 July 27th
SUPER SATURDAY
It’s bargain hunting at its best. Super Saturday, dubbed the “Rolls Royce of garage sales,” celebrates its Sweet 16 at Nova’s Art Project in Water Mill from 12-6pm. This ultimate designer discount sale, hosted by Kelly Ripa and Cedarhurst native Donna Karan, benefits the Ovarian Cancer Research Fund. Go shopping with the stars. June Ambrose, Tiffani Thiessen, Edie Falco, Ashley Greene, Beth Stern, Abigail Breslin, Emma Roberts, Kelly Rutherford, Jonathan Cheban and the entire Kardashian crew have been spotted scooping up sales. Bring the kids—there are carnival rides (Kelly Ripa usually takes a few spins on the Ferris Wheel), games and lots of goodies. Lather on the sunscreen and wear wellies if it rains. Get there early. Before the gates open, a huge crowd forms in hopes of scoring the best steals. Tip: Wear a bathing suit under your clothes so you can try items on! Size 7s, beware of Lisa Rinna—she’s known to score all the Jimmy Choos! 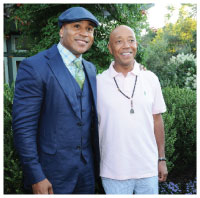 Aug 10
WRITE STUFF
Stylish savants gather for a star-studded signing session at East Hampton Library’s Authors Night. Buy books and meet and greet celebrity scribes, including Gwyneth Paltrow, Nelson DeMille, Kelly Killoran Bensimon and Marcus Samuelsson at a book signing cocktail reception at Gardiner Farm in East Hampton village. Authors typically sit in alphabetical order, so you can navigate to your favorites first and have a little one-on-one talking time. Autograph seekers be sure to B.Y.O.S. (bring your own Sharpee). Founding co-chair Alec Baldwin usually makes the rounds. If you buy a VIP ticket, you can attend a themed dinner party at a private home in honor of one of the guest authors. 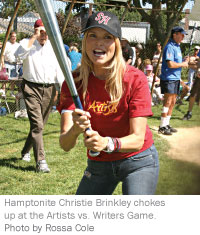 Aug 17
HEY BATTA BATTA
It’s game on! The celebrity charity softball Artists vs. Writers game is at Herrick Park in East Hampton. Celebrating its 65th anniversary, expect to score with major stars this year. Alec Baldwin, Chevy Chase, Mark Feuerstein, Christie Brinkley and Josh Charles have all played the field. Get there early. I find practice time most entertaining and the stars are usually up for signing autographs then! Keep an eye on the stands as you never know who will stop by (perhaps Bill Clinton will make a return visit). Shorts and t-shirts (especially if you purchase the official game shirt) welcome and lather on the sunscreen. The game starts at 2pm. Raindate is August 24th.

best tips FOR BEING HOT IN THE HAMPTONS

Ladies, wear wedges—if there are no carts to transport you from parking to party, there are long walks involved. Also, you’ll likely be standing on beautifully groomed green grass. The dress code is almost always casual chic. If you aren’t sure what to wear, search online for party pics from last year.

Eat before you go. Many of these parties are cocktails and light bites (with private sit-down dinners to follow), so check or have a reservation ready for afterwards.