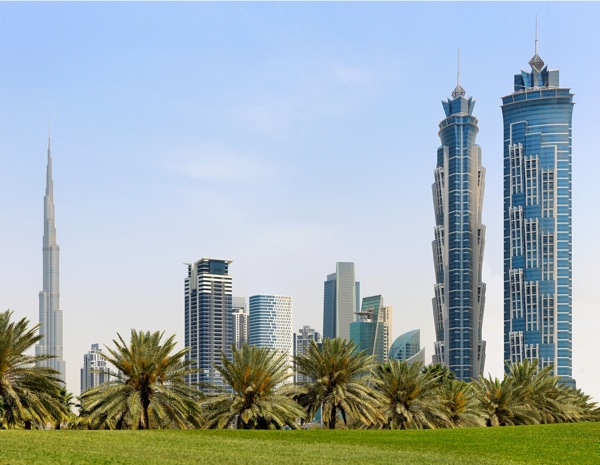 Dubai, very recently a Middle Eastern desert village, is now a cutting-edge skyscraper theme park. This urban architect’s wet dream shows what a few billion hydrocarbon dollars can do as they race into the sky. It reminds me of Westhampton’s Dune Road in the 1970s, a gauche display of row upon row of can-you-top-this building design.

The neighborhood called the United Arab Emirates is where neighboring Abu Dhabi is the only other place Americans can pronounce. One of seven Emirates, Dubai is one of the Gulf States that rim the Persian Gulf. Locals are called Emirati, but I didn’t meet any. The army of imported foreign workers, from engineers to concierges, makes up more than 80-percent of Dubai’s two-million residents. Under British rule until the 1960s, the seven regional inter-married tribes each carved out their own place under the sun—a sun at its mightiest.

Dubai is nearby Saudi Arabia’s shopping and entertainment center, and then some. Saudis, extremely restricted in their home country, come here for naughty happy hours. Some refer to Dubai as a positive dictatorship, where families can easily afford to average four children per household, and without medical or education costs. The insane growth is impressive but doesn’t address the main reason most people live in cities: The convenience of walking to restaurants, places to purchase necessities, and neighbor’s homes. Navigating afoot among any of these skyscrapers, even neighboring ones, usually means hurdling a divided highway. Most people take cabs (very inexpensive), which often have to drive miles of access roads to deliver them across the street. Today, the city features engineered parks that overflow with lush greenery—a chore in the parched desert—but Dubai now needs sidewalks to reach them!

Having always viewed malls as the optimum places to shoplift, as was my junior high school habit while in Long Island’s Roosevelt Field mall, I discovered there were much bigger and better reasons to visit Dubai’s malls: The ultimate spectacles. The Dubai Mall (thedubaimall.com) has an aquarium that’s big enough to accommodate a high school gymnasium, not to mention mammoth sharks and other gigantic sea creatures. World-class sculptures also abound, including “The Waterfall,” walls of cascading water flowing amid 50 life-sized Academy Award-like sculptures of men seemingly attempting to dive off the walls into the pools waiting below. Maybe they’ve had it with the 1,200 retail outlets. 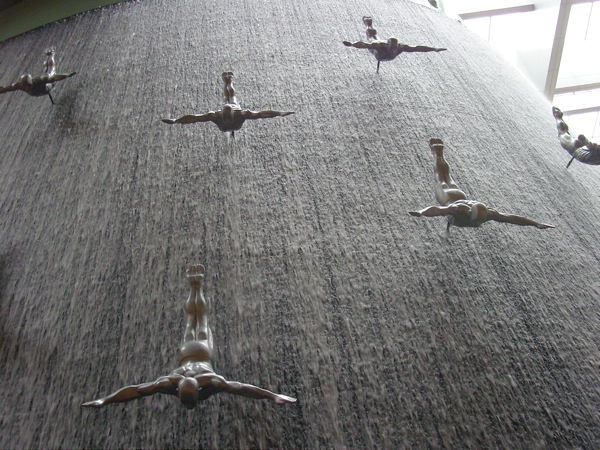 Although the terrain is flat, it’s easy to get high here. Another thing to do while completing your shopping list is scale the world’s tallest building—it looms over The Dubai Mall. Summitting Burj Khalifa (burjkhalifa.ae) in a rocket-ship elevator—that travels the longest elevator distance in the world—your ears are sure to pop several times. Aloft above the urbanized desert, you’re sure to enjoy a cooling breeze that mutes the city scramble and substitutes a thin-air buzz. 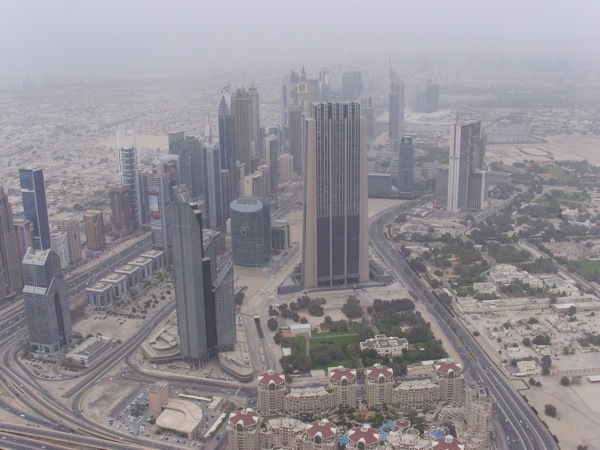 The hotels here also take reaching for the sky to another level. Dubai’s JW Marriott Marquis (jwmarriottmarquisdubailife.com) redefines the swank desert hotel. The tallest freestanding hotel in the world melds a diverse collection of employees from around the world to personalize the ultimate in Arabian lodging pizzazz. And there’s two of them, side by side. One tower is designed to resemble the trunk of a palm tree, and it has three world-class restaurants featuring the best of France, Thailand, and whatever kind of steak you fancy.

Another indicator of the country’s unbridled growth is its exploding status as a regional and global airline hub. Dubai International Airport, with its four terminals, is the second largest and busiest in the world. One terminal is dedicated to intra-Arab travel. And, get this, nearby another larger airport is almost up and running.

Dubai is a testimony to the newest phase of collective human endeavor. In a land where gas is cheaper than water, this oil-fueled prosperity means unlimited money for architectural imagination and other infrastructure improvements. Hopefully, they’re working on those sidewalks.

My next stop was Bahrain, a Gulf State that’s not an Emirate, and where a local testified that he lived on the Arabian Gulf, not the Persian Gulf. As opposed to living atop the liquid gold, this island nation refines it and handles the region’s banking. The growth here can also be seen in the sky with its dazzling architecture, but the real mindblower is how the country is rapidly reclaiming land and expanding into the gulf. One baffling consequence of this reclaimed land is that former seaside resorts are now a mile offshore.

Made up of mostly Shiite Muslims, this is home to an entrenched royal family, and the U.S. 5th Fleet. Ten-thousand coalition troops are based here, the majority being American. While Saudi Arabia extracts the oil, Bahrain refines it. Ship repair also keeps residents busy.

Cultural heritage runs deep here, and there’s no better place to behold the polarizing contrast of Arab old and new than at Qal’at Al-Bahrain, a World Heritage Site of ancient ruins. While standing upon these layers of history, you can peer at the nearby upthrust of modern construction that resembles a vista of toy models.

Any questions you have about Qal’at Al-Bahrain’s successively buried civilizations are answered as the history lesson leads indoors to Bahrain’s National Museum (moc.gov.bh/en/top10/Name,7524,en.html). An architectural spectacle itself, it houses regional treasures from all of recorded history.

This financial-center harbor town is also an architectural zoo, where glimmering skyscrapers seem to bend and weave with the wind. And sometimes the wind is aplenty. Blinding fog-like sandstorms can halt traffic. Those who don’t slow down in them create a sharp rise in car crashes.

When I checked in at Bahrain’s Marriott Residence Inn by Marriott, the entire staff greeted me in the lobby by doing a song and dance routine, something out of a Saturday Night Live skit, but coming straight from the heart. This genuine welcome summarizes a country of new, happily employed migrants, all ready to share their story and enhance yours. A block away and also mindfully staffed, Marriott’s Executive Apartments, their luxury extended stay brand, has 180 swank pads.

The oil and financial centers of the Middle East are desert oases, where the mirage of skyscraping kingdoms is real.

STAY AWHILE: To accommodate the overflow of imported workers in both of these rapidly emerging regions, the Marriott International’s extended stay brands, such as Residence Inn and Marriott Executive Apartments, provide lower rates for longer stays. By offering multiple bedroom apartments and suites, full kitchens and residential amenities, these brands understand the needs of these expats on the road and provide a unique experience for longer stay guests. The upper-moderate option is Residence Inn by Marriott, which provides daily housekeeping for foreign engineers and other workers with contracts requiring weeks or months abroad. These four-star lodgings cater to these workers and their relocated families to cities undergoing infrastructure overhauls. For foreign workers with contracts extending into months or years, Marriot Executive Apartments create luxurious home-away-from-home arrangements, providing weekly housekeeping and a staff that will do everything, including fulfill shopping lists. Often, Marriott positions four of its brands in one location, with JW Marriott Marquis serving at the top end.