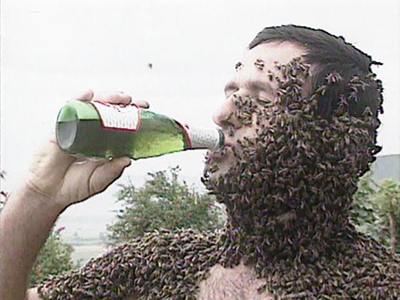 I was celebrating my country’s independence within a cesspool of homogeneity, accompanied by Chinese-manufactured plastic flags and the piss-odor of light-bodied aluminum lagers.

“A man’s torment is inevitable, like Tuesday,” I said.

SUBTITLES: “Through a telescope, or manhole, the universe flickers like a defective Lite-Brite,” I said.

After debuting a lower-strength version (5.10% ABV) in 2012, Barrier recently amplified the recipe to establish a hoppier identity. Bumble was rereleased on July 03, for the Oceanside-based brewery’s third birthday.

“We were trying to strike a balance between wheat beers and pale ales but it was too hop forward for the former but not bold enough for the latter,” says Craig Frymark, co-owner. “We said to hell with balance and compromise and decided to totally amplify all the flavors and characteristics and brew up one wild and crazy wheat beer.”

Barrier will brew “five or six more batches” of Bumble, says Frymark, “but hope to ultimately add it to the regular rotation.”