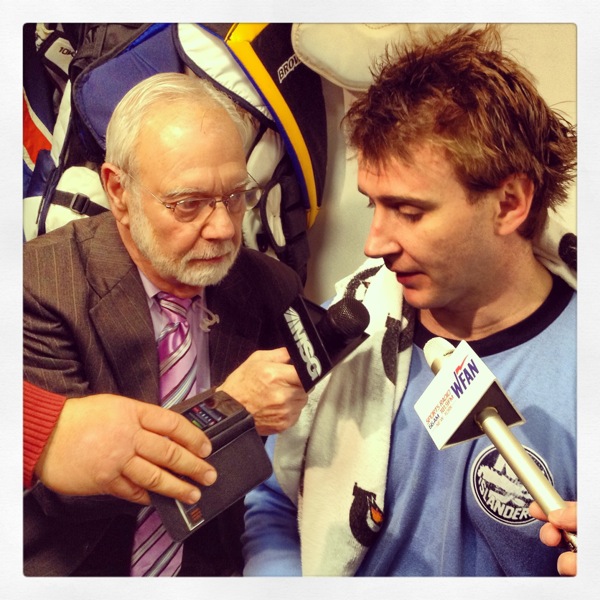 There is infighting that occurs between fans who want to grab big names and spend big money, and the fans who remain patient and let Snow do what he’s done best the last few years, which is build from scratch at affordable prices and let the system develop. It’s working. Last season’s playoff run provides enough scope into what Snow has done.

Here’s the brief run down of the major transactions the Islanders have made in July (through July 8):

Now what does it all mean?

Snow solidified the goaltending needs of the Islanders for at least year one with veteran Evgeni Nabokov, 37, who started 41 of 48 games for the Isles in 2013 and sported a 23-11-7 record with a 2.50 goals against average. He was signed to a one-year contract.

In other news from the crease, the Islanders put Rick DiPietro on unconditional waivers and bought out his contract.

“It was an extremely tough decision to use the compliance buyout on Rick’s contract,” Snow said in a release. “His drive to win games and compete at the highest level for the New York Islanders was never questioned. With Rick back at 100% health, we wish him nothing but the best as he continues to pursue his career.”

DiPietro appeared in 318 games for the Islanders in net, second all-time to Hall of Famer Billy Smith.

Snow didn’t have to go far for his biggest signing this off-season, which was a seven-year extension for defenseman Travis Hamonic. The former 2008 second round draft pick has been an aggressive and hard-working staple for the Islanders and is expected to have his star shine brightly through the duration of his new contract.

Brouchard has been in the NHL for 10 years and is a former first round pick (8th overall in 2002). He has spent his entire career with Minnesota and ranks second all-time in franchise history in games played with 565 under his belt.

“I picked the Islanders because they’re headed in the right direction,” Bouchard said in a story on the Islanders’ website. “They made the playoffs last year. They have a great bunch of young guys that are really talented. I think my type of game fits pretty well with the way they play.”

Regin, a five-year NHL veteran, previously played in Ottawa and has experience on the power play and will be versatile in different areas.

Let’s also not forget about the quick deal to rid the Island of Nino Niederreiter, who according to many reports was a thorn in the organization’s side and vocal about not seeing enough ice time in the NHL. Niederreiter was the fifth overall draft pick by the Islanders in 2010 and was dealt to Minnesota for Cal Clutterbuck, who has a reputation as tough as his last name suggests.

Brouchard and Regin bring speed, something the Islanders are not short on. Adding more skilled skaters to a young roster will only make them more powerful in certain areas of play. Both players come cheap and only have upside.

Sounds familiar? Matt Moulson, Michael Grabner, Brad Boyes, and many others were cheaper signings who would up contributing in major ways.