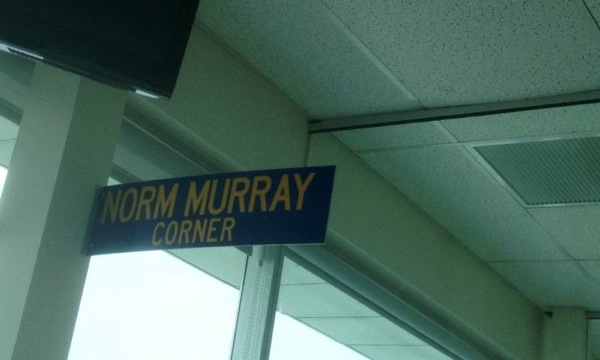 For decades, Norm Murray manned the press box at Hofstra’s Shuart Stadium and now there’s a corner there named in his honor. Murray was the public address announced for football and lacrosse at Hofstra for more than 50 years. He passed away in late June.

“Norm Murray was recognized as the voice of Hofstra athletics at Shuart Stadium for many years,” Hofstra President Emeritus James M. Shuart said in a statement. “As someone who was also a long time personal friend, he will be greatly missed.”

Long before he became a fixture with the Blue & Gold, Murray served in World War II in the U.S. Navy and worked for the Federal Bureau of Investigation (FBI) from 1951 to 1975, serving in Washington, D.C., Baltimore, New York City and Marine Corps Base Quantico.

The public address booth at James M. Shuart Stadium was named in Murray’s honor in 2000.

“Hofstra University was fortunate to have the voice of Long Island football and lacrosse as our announcer,” mentioned former Hofstra student-athlete, coach and administrator Harry Royle. “Long Island has been enriched by his community spirit and will always remember him as a great friend. I personally will remember my years of friendship with Norm and send my condolences to his family.”