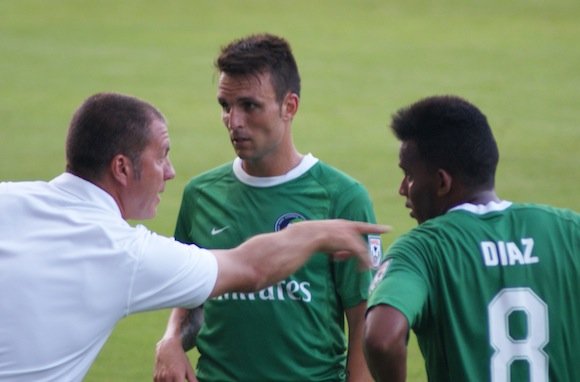 New York is quickly becoming the soccer capital of America. With recent news of an impending MLS team coming to New York City known as NYCFC, the success of the New York Red Bulls, an existing MLS club, and now the re-launch of the New York Cosmos of the North American Soccer League, there’s no shortage of soccer to sink your teeth into.

It was announced in 2010 that the New York Cosmos would make their return after a 30-year hiatus from the soccer world. In a team press release the organization is referred to as “the biggest soccer club in U.S. history,” which is vastly foreign to the new age soccer fans of today’s generation.

Bringing a rich history and tradition, decorated brilliantly with the likes of Pele, the Cosmos have decades of lore already under their belts when they debut again this season at Hofstra’s Shuart Stadium. (The Cosmos played at Hofstra in 1972 and 1973 before expanding to Giants Stadium with more acclaim).

The Cosmos inked a television partnership with ONE World Sports, and eventually they signed a distribution agreement with SNY, the official TV home of the New York Mets and Jets. SNY will air all Cosmos home games for 2013.

SNY will also air five episodes of “Cosmos Classics,” the newly minted series that looks back at some of the most memorable games in club history, according to a release from the club.

“This is another important step in the reboot of our club,” Cosmos Chief Operating Officer Erik Stover said in a statement. “ONE World Sports has proven to be a great partner thus far and we know their production will be of the highest level. Now, adding SNY to our broadcast family helps us attain one of our main goals, which is reaching more of our fans in the tri-state area.”

Schedule is set, TV deal is in place, new logo, marketing and branding materials are in order and they’re even honoring their history and tradition like it happened yesterday. Only thing left is winning and maybe a Pele bobblehead giveaway.

The Hot Corner will be monitoring the club throughout the 2013 season, breaking down the roster, the game play and the overall operations of the club, so stay tuned.