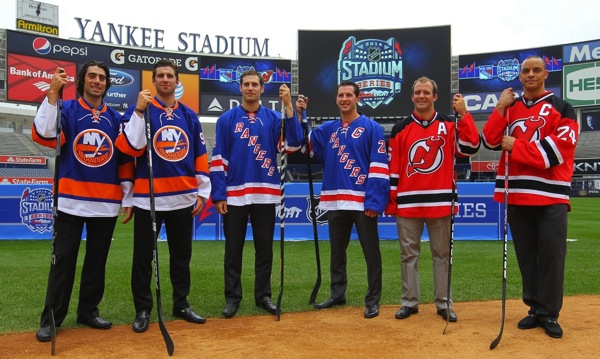 It was only a matter of time before the NHL’s outdoor games came to New York. Yankee Stadium will play host to a double feature in January when the Devils play the rangers on the 26th, and on Jan. 29 when the Rangers play the Islanders.

“It’s no secret that people have urged us to play at Yankee Stadium since the moment it became clear that our outdoor games were such special, unique and fun events,” NHL commissioner Gary Bettman said at a press conference held at Yankee Stadium on Thursday. “The creation of the Coors Light NHL Stadium Series allowed us to work within the Yankees’ scheduling parameters and, just as important, include all three NHL teams from this area at this spectacular place.

“The rivalries between the Rangers, Islanders and Devils are among the most heated in sports. These games in this venue will showcase our players and our sport to a national viewing audience as well as to a variety of visitors who we anticipate will be in the area at that time. I hear a rumor that there is a football game in New Jersey sometime later that week.”

The Islanders have another monumental game earlier in the season when they scrimmage the Devils at Barclays Center on Sept. 21 during a pre-season contest. It will be the first hockey game played at the new arena, which will be the future home of the Islanders starting in 2015.

The games at Yankee Stadium are part of the 2014 Coors Light NHL Stadium Series, which will also feature games in Los Angeles and Chicago. Michigan Stadium will host the Winter Classic on Jan. 1 and the Heritage Classic will be played in Vancouver on March 2.

“It’s a regular-season game, it’s an important game. Obviously it’s playing against our rivals, that’s exciting,” Islanders star John Tavares told NHL.com. “You just really get to experience all the time you’ve taken to get to the National Hockey League. Everything it took. A lot of that for me was playing outside.”