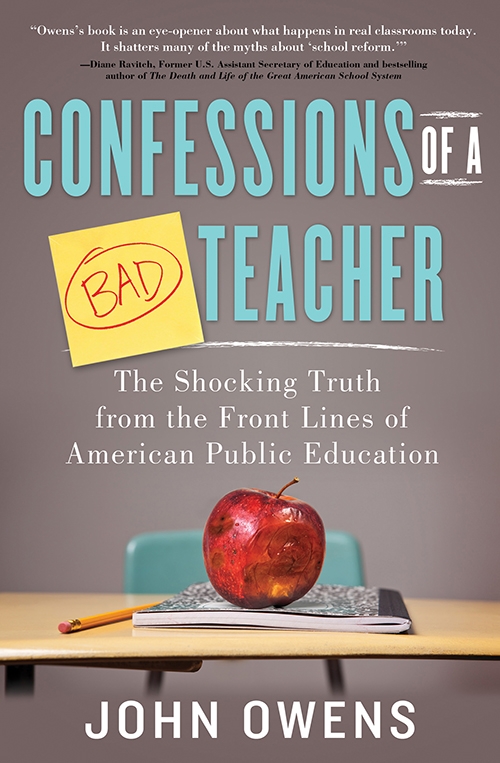 Your child struggled a little in school last year.

He had a hard time catching on to some of the lessons, saying that the teacher didn’t explain clearly. You saw more poor grades than you usually see, and there were a few disciplinary problems, too. You’ve decided to monitor the situation closer this year, just to be sure.

Your child struggled in school last year—but maybe, so did the teacher. In the new book “Confessions of a Bad Teacher” by John Owens, you’ll see why, and how something similar might’ve affected your child.

Once upon a time, John Owens was used to “forty-third-floor views…glass, carpet, and mahogany…” As a publishing executive, he enjoyed regular hours and evenings free—and he left all that to become a teacher. It was a “calling.”

On the day he interviewed for a job at the Bronx school he refers to as “Latinate Institute,” another teacher urged Owens to “run away” while he could. Undaunted (and scoffing just a bit), Owens went through the interview anyhow, and was hired to teach writing classes.

Before school even started, he was overwhelmed.

During a multiple-day orientation, Owens and his fellow teachers were inundated with instructions, paperwork, rules, and maps for coursework. The principal of Latinate, “Ms. P,” was a no-nonsense woman who ran the school with an iron fist and insisted on strict adherence to dozens of rules. She called Latinate a “cathedral of learning.”

Though he connected with the students and actually saw some progress, he knew he was in trouble when he turned down a training session he felt was redundant; a quick and fiery chastisement put him on alert. From then on, his every move was scrutinized and, “[e]very second of the day was filled with demands…” He lived in dread of a “U” (signifying “unsatisfactory”) and he actually walked off the job one day—but returned, because he loved the kids.

Still, “I felt like I was,” he says, “unquestionably, a bad teacher.”

For the average reader, I think it would be easy to believe that author John Owens’ experiences were the result of one principal and one school. The particular year he describes in this book happened in the Bronx, in a poverty-stricken area—but is it that bad at your child’s school?

I wondered that, even though “Confessions of a Bad Teacher” includes lots of sidebars from other instructors, nation-wide, who’ve experienced the same problems. Owens (who has since left teaching) speaks the hard and not-so-pretty truth, and he includes a chapter on ensuring the health of your child’s education. That’s extremely helpful and, in some districts, mandatory knowledge—but I still wonder if it might not resonate quite as much in smaller, closer-knit communities.

Overall, I think this book’s audience lies in bigger cities with larger school districts, and with the parents of those district’s students. If that’s you, then “Confessions of a Bad Teacher” is an absolute must-read.

If not… you may struggle to understand it.