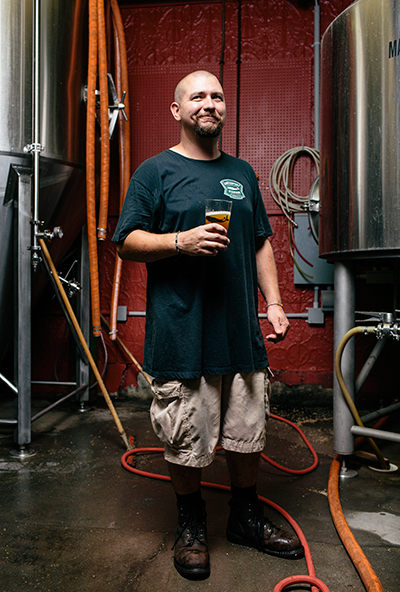 The allure of different has influenced, controlled, and, unfortunately, crippled several aspects of my life. I am rarely content with my curren—

Beer has benefited and suffered from different. The industry continues to gain popularity, swelling with a perpetual flux of new breweries and, subsequently, more options. Any loyalty to specific brands or beers, however, appears nonexistent, and the task of constant relevancy seems to precede quality.

A summer ale released, and only available, during summer, for example.

DJ Swanson is brewmaster of Greenport Harbor Brewing Company, a Greenport-based brewery responsible for Leaf Pile Ale, a “pumpkiny orange ale with our own blend of fresh and whole cinnamon, ginger, nutmeg, allspice, and vanilla bean.” Swanson previously brewed at John Harvard’s Brewery & Ale House in Lake Grove before joining Greenport Harbor in 2009, and has encountered seasonal creep during his entire career.

Should we be able to purchase Southern Tier Brewing Company Pumpking in July? Who is responsible for the acceleration? Breweries? Distributors? Consumers? Are we ever truly satisfied with…anything?

Leaf Pile Ale is the beer I seem to hear about more than any other. I affectionately refer to it as my ‘tombstone beer,’ as I’m pretty sure it will follow me to my grave. The first batch for 2013 was racked into kegs on August 06 and we’re shipping the first of it to our distributor on August 14. Leaf Pile Ale, right now, has a release date of September 01 but we had a sneak preview keg at the North Fork Craft Beer, BBQ & Wine Fest on August 10. If we didn’t bring it, I would have heard aboout it all day.

The basic description is simply pumpkin pie in a glass, but it’s a pumpkiny orange ale with our own blend of fresh and whole cinnamon, ginger, nutmeg, allspice, and vanilla bean. When pressed I will admit that this is my least favorite of our seasonals. That said, as much effort has gone into nailing the spice flavor as has gone into any other beer I’ve made. It’s like a great pumpkin pie, not too spicy with hints of graham cracker.

I don’t think any other season is defined by a flavor like autumn is. That cinnamon-pumpkin pie thing just screams fall, and that flavor has permeated everything: coffee, ice cream, baked goods, cleaning products, and more. Starbucks and Dunkin’ Donuts have embraced it as strongly as any brewery I can think of. It seems like everything is pumpkin-flavored in the supermarket.

Seasonal creep is part of our life everywhere, not just the beer store. All seasonal beers have continually shown up earlier and earlier to the point that some larger and a few smaller breweries are basically a whole season ahead. Spring ales in January is not perceived as negatively, I believe, because people are looking forward to ending their hibernation. The change from summer to fall is completely opposite. Summer is freedom, and fall is back to the grind. I was in a beer store the first weekend of August, looking for something to enjoy by the pool, and was confronted by a huge wall of pumpkin ales at the front of the store. Floating around on a raft, sipping an imperial pumpkin ale was not appealing in the least.

There is plenty of blame to spread around as to why this creep has happened. As a brewery, we are pressured by our distributor to get seasonals in as early as possible. We have to start brewing earlier than I’d like in order to be ready to meet the demand. The distributors are racing each other to get good placements, and the accounts don’t want to miss out on popular beers. In the end though, isn’t it the customer who has the power? Someone is buying these beers when they come out. I guess if more consumers refused to buy seasonally inappropriate beers, eventually the wholesalers and producers would be forced to react. We try to stand firm, but also have to be aware of the realities of the marketplace.

I hear about Leaf Pile Ale all year. When’s it coming? Why isn’t it year-round? It grates a bit, but it’s certainly better than people telling me the beer sucks and I should find a job I’m better suited for. I’m not too crazy about the brewery smelling like potpourri in July, but there are worse problems to have than making something people really want. We started brewing Spring Turning Saison before Christmas, Summer Ale in March, Leaf Pile Ale in July, and Anti-Freeze will be in October. We’ll try our best to release them at what we feel is an appropriate time, but the real season may differ somewhat from what the calendar says. Is Oktoberfest in October?

A little background on me now. I started brewing at Union Station Brewery in Providence, Rhode Island in 2000, and we did a couple of batches of Harvest Spice Ale around Halloween. This was a beer for the ladies who didn’t otherwise drink beer (after that, and the experience my first fruit beer on Long Island, I will never use the term chick beer again) and was popular, but nowhere near as popular as our Octoberfest.

On December 31, 2001, I was offered the head brewer job at John Harvard’s Brewery & Ale House in Lake Grove. I immediately heard how popular pumpkin beer was at that meeting. I started in February of 2002 and heard about pumpkin beer every day until the fall. Phone calls even started in July. The previous head brewer had done two batches a year around Halloween, but I started a bit earlier and sold a lot of beer. Over the next couple of years we released it earlier, generally around the first day of fall. When I left in 2006, we were doing about 10 times as much and that volume has continued to grow. I guess I have done my part to feed the pumpkin craze, but it’s what people want.

The seasonal trend has really been the driving force of the beer world, which has in turn led to increased one-offs and limited stuff. It is not necessarily my favorite part of the beer culture. There are some negatives associated with the obsession of chasing the mythical beer. It’s hard to tell sometimes if people are looking for an enjoyable, flavorful beer to pair up with their good times, or if the chase of a beer that no one else can enjoy has become the good time.

That may be another rant all together.