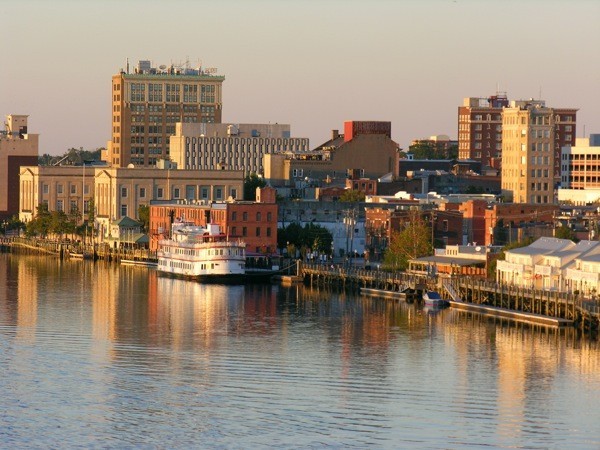 The walking gene should not become out-selected over time. Ambling through walker-friendly Wilmington, North Carolina—where past and present gracefully comingle—historian and walking tour-guide extraordinaire Bob Jenkins pledged, “Wilmington was originally settled by pissed-off, Southern-English, draft-dodging, second sons.” Jenkins (a colorful, defrocked Methodist Minister) helped spearhead a movement to preserve historic sites and revitalize downtown beginning in the seventies. That effort endures and now boasts a 230-plus block National Register Historic District. “Native sons include Charles Kuralt and Michael Jordan,” he winked with a knowing smile. Alas, Bob no longer does his daily walking tours but is available for pre-arranged group tours. 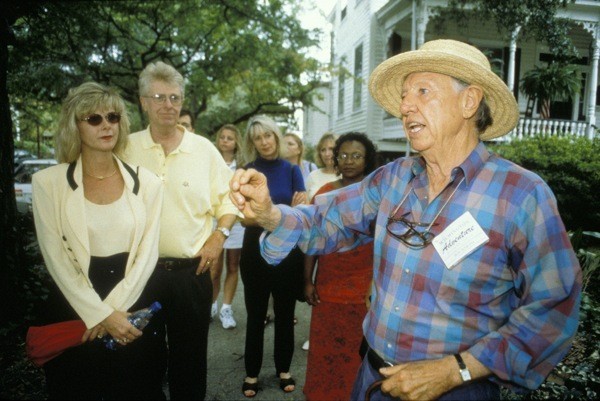 Merchant-class Victorian architecture dominates the airy urbanscape. Because of Wilmington’s commercial connection to Europe and isolation from the rest of the US until the Civil War, Wilmington’s affinity with Europe was then stronger than its tie with Raleigh—a mere 100 miles away. I-40 opened in the mid-90’s and nearly cut that travel time in half.

For now, franchise sterilization has been mostly staved off, leaving Front Street a stolen reprieve from the corporate indenturing of America. The sleepy Dixie Grill is the front end of a vintage pool hall, and Mecca for satisfying doses of health food or tasty artery cement. Other fun dining experiences include The Basics (thebasicswilmington.com) offering Southern food with a gourmet twist, located in The Cotton Exchange (shopcottonexchange.com). Epicureans can certainly find their way to higher-end dining, but these are the places where the fun hides. 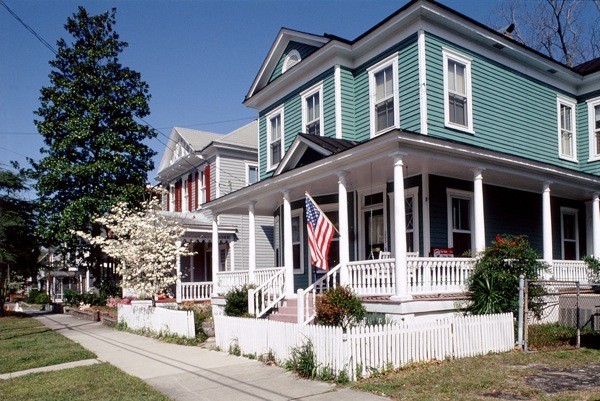 The food and music menu is surprisingly diverse for a city that’s still actually quite isolated from the rest of North Carolina. Nightly music options include blues at the Rusty Nail, or options for Dixieland, jazz, rock, bluegrass, and folk in a variety of venues ranging from dungeonesque bar basements to breezy, outdoor brick courtyards. Halfway through a blues set at the Rusty Nail, an 80ish, white-bushbearded Jim Bath—who earned Playboy’s “Bachelor Pad of the Year” award in 1971—led me behind the bar to his shop where he was modifying scraped war ship (Iwo Jima) surgical room lamps into designer home lighting. Bath, a WWII Navy Pilot and transatlantic sailor, appeared in 50 movies since 1989, when he “settled” here. Although it would spell epic, this archetypal nomad fancies no epitaph beyond, “Recycle me as fish food.” Today, Jim has moved to different digs and no longer owns the shop, but is still a local. 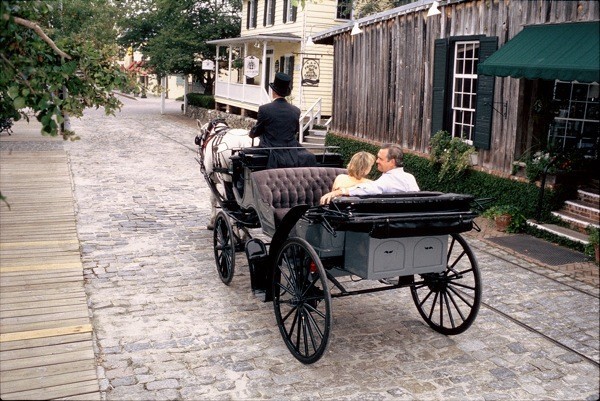 The Barbary Coast tavern is a watering-hole icon that survived Wilmington’s facelift. A certified dog house (four and two-leg genres), the tone of this eldest bar is set by an everpresent array of canines ranging from yappers to lumbering English Mastiffs. The dungy joint has several moods. The afternoon regulars included a master portrait painter, an unemployed character actor who is, for better or worse, perpetually in character, an Irish-American Vietnam Vet and a philosophical Puerto Rican. Next came the baseball-capped laborers, followed by the late night, vintage rock aficionados. A respectful, roaring-20’s vibe pervades, and the jukebox fits every mode. Years back, a mounted cop rode inside for a photo opportunity.

The tavern’s staff remains unmoved by stars dropping in from nearby Screen Gems Studios: This is one of America’s busiest film and television production towns. Recent film credits include The Conjuring, Iron Man 3, We’re the Millers, Tammy (starring Melissa McCarthy), and TV’s Under the Dome, and Revolution.

Screen Gems Studios is where actor Brandon Lee met his demise in a gun accident while filming The Crow. The entire town was also the set for the Dawson’s Creek television series. Television and movie zealots will enjoy the Hollywood Location Walk of downtown locations. Also, nearby, the Cape Fear Segway company has a Hollywood themed Segway tour capefearsegway.com. As a New Yorker surrounded by struggling actors, it was bizarre to hear conversations about “extra work” and “new headshots” within earshot of gnarly shipbuilders discussing trucks in heavy southern accents. Vocational diversity makes this place tick. 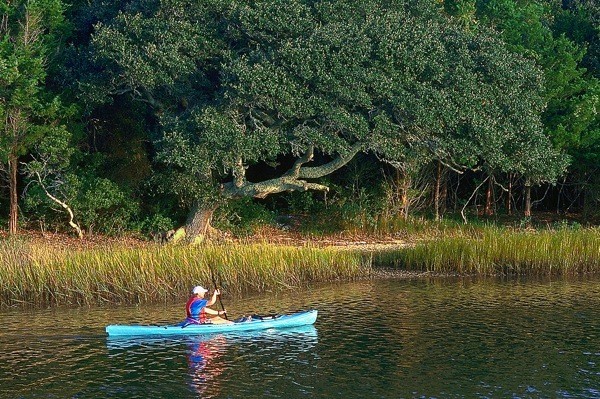 I opted to paddle and ponder inland into the sleepy Black River Enchanted Forest. Cruising Indian style on the tannin-tea colored Black River is a serene odyssey through swampy Cyprus forests. Kayak Carolina guide and owner Angela Pagenstecher, cruising tandem with her black lab Lucy, needled our group through a maze of the onion bulb-based trees lining the riverbank. The river has no homes or industry along its banks. The mythical, partially submerged, bent-knees root systems mystified our pilgrimage away from civilization. Kayak Carolina will pick you up in town with an option for overnight camping.

It used to be that getting here was the chore. Riverside Wilmington rises up a slight hillside, 29 miles upriver from the confluence of the Cape Fear River and the Atlantic. Fear is the operative maritime term. The shifting underwater shoals, created by the mighty river’s merge with the ocean, is a chronic seafarer’s nightmare. To this day, six families of river pilots are still the reigning experts in navigating the confluence’s shifting shoals. Entering the river in a large vessel without one of them onboard is against the law.

The first settlers were southern Englishmen, many without inheritance rights (traditionally entitled to the oldest brother) and nearly all apathetic toward fighting another King’s war, who sailed to the new world to exploit the region’s inexhaustible pine forests. Once ashore, they never left. Permanently turning their back on Britain, these Wilmington pioneers nurtured their revolutionary spirit in the Cape Fear Basin. The first open resistance to the enforcement of the British Stamp Acts occurred in Wilmington in 1765.

WW II shipbuilding doubled Wilmington’s population and continues to support a substantial manufacturing and shipping base. During WWII, 243 battleships were built in five years. That vibrancy slipped somewhat in turbulent sixties and seventies when Merchant Marine hangouts included topless bars and a dirty bookstore… “You could shoot a cannon down Front Street and not hit anything,” reminisced Murphy, the Barbary Coast tavern’s former deputy.

Usually, people make a place, and this community is blessed with goodwill. Visitors often find leaving this town is difficult. Wilmington has been reinvented to reflect its former glory and recall what it does best: Relax.

There are scores of bed-and-breakfasts and inns to choose from. If you want a true “staying with friends” experience, a bed and breakfast emblemizing local architecture and grace is the way to go. The French House (thefrenchhouse.com) (c. 1850, Greek Revival) is on a one-way brick street of towering trees. It predates the town’s popular Victorian style with original footed bathtubs, hand-blown glass windows and wood trim. There’s also a separate, family-friendly two-bedroom cottage out back was originally the kitchen. Built by pioneer civic leader George R. French, one of Wilmington’s original residents, who owned a leather shop (boots, saddles) on Front St. The George R. French Building—a cast iron design storefront also on Historic Register. 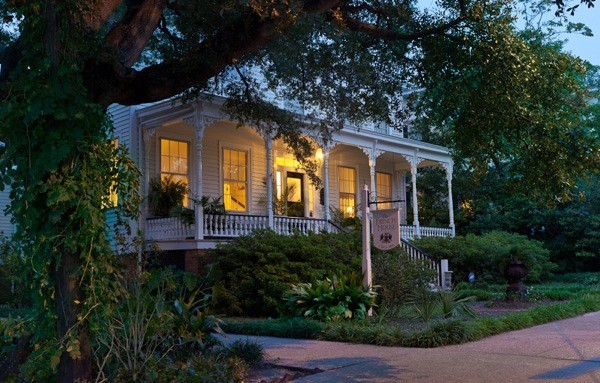