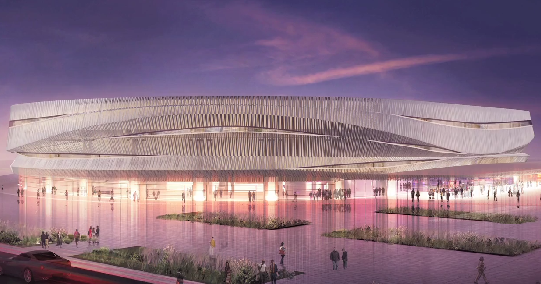 It’s been more than a decade of talking, of politics, of failed visions and of broken hearts, but finally there is a plan and vision for Nassau Veterans Memorial Coliseum.

Diehard Islanders fans against the move to Brooklyn, the same ones who feel betrayed that the original plans didn’t work out to keep the franchise in Nassau County for good won’t feel fantastic about the new renovation plans, but there is a glimmer of hope and some positives to take away from the deal.

Bruce Ratner, the executive chairman of Forest City Ratner Companies, which also built the Barclays Center, is the man behind the winning bid for the renovations. He said he expects the renovations to start in 2015 and last about 15-18 months.

Here’s what you should know, sports fans:

*From the looks of Nets coach Jason Kidd, Kentucky basketball coach John Calipari, boxer Bernard Hopkins and Islanders forward Matt Martin all in attendance at the Coliseum press conference last week, the reconstruction and growth of the set up will mean more sporting events in the building; basketball, boxing, hockey and more.

“You’ve got some excitement in your future,” Calipari said during the press conference. “You’re going to have teams from around the country flocking to this building.”

*The Bridgeport Sound Tigers, the Islanders’ AHL affiliate just north of Long Island is rumored to be a possible tenant at the Coliseum. There’s no lease agreement that they’d break at their arena in Bridgeport. It’s a home run for the Islanders to have their prospects even closer to their home stadium and it’s great for hockey fans to watch the organization’s prospects and enjoy a different speed of the game.

*Among the basketball games slotted to eventually be played at the new Coliseum are Brooklyn Nets practices and exhibition games – at least one per year – which is touching since the Nets called the Coliseum home in the 1970s during a powerful stretch in the franchise’s history.

*How does indoor professional lacrosse, arena football, world championship boxing and high level NCAA basketball from the likes of the Big 10 and Pac 12 all competing in Uniondale sound? Conversations and negotiations are already underway, according to Ratner, to bring it all to the Coliseum.

*Ratner said he’d like the Islanders to return and play up to six games at the new Coliseum – four regular season and two pre-season. This would soften the blow greatly for many Islanders fans against the move to Brooklyn. At least it’s something. Expect the 13,000-seat arena to sell out each of those games well in advance. Playoffs aside, how many fans other than season ticket holders actually go to six-plus games a year?

*Ratner also quelled rumors that the Islanders would leave the Coliseum earlier than the 2015 date that has been publicized since the Barclays deal was signed. That means Long Island and Coliseum zealots can enjoy the friendly confines of the existing barn for another two full NHL seasons (2013-14 and 2014-15).