The premise of breakfast doesn’t seem to jive with New York’s fast pace. The weekday morning rush has reduced the meal to a bowl of whatever the kids are having, coffee sucked from a to-go cup or inhaling something from some greasy drive-through bag. For a meal dubbed the most important of the day, it’s given little thought because there are showers to take, lunches to pack and traffic to beat. Maybe what Long Island needs is a touch of the Californication Chef Chris Randell developed at Left Coast Kitchen and Cocktails.

During the workweek LCK in Merrick operates as a gastropub, focusing on lunch and dinner. But Randell grew up in Huntington Beach, CA, steeped in the surf culture that cherished innovative, fast breakfasts from hole-in-the-wall restaurants after a morning on the waves. “All the surf cities in southern California had one, if not four or five places to eat breakfast,” Randell said. “And I’m not talking about diners.”

As a nod to that tradition LCK serves twenty kinds of pancakes—five more than IHOP—along with an assortment of omelets, hashes and platters starting at 8:30am on weekends. This is his version of breakfast, which he’s careful not to call brunch because that would restrict it to the weekend. He’s thinking bigger than a mere two days, but until the word about his vision of breakfast culture spreads enough to allow him to offer it daily, he’ll start here. And he keeps it quick.

Like the menu says, “…when you’re done and paid and see a bunch of hungry people waiting, feel free to go enjoy the rest of your day.”

The breakfast menu is edited down to one page, quite a departure from what you’d be handed at a diner where you’re free to order eggs ad hoc with any of four kinds of toast. Instead, Randell’s breakfast is as carefully planned as dinner. He writes in the menu: “Our omelets are made by chefs, not short order cooks. If you do not like perfect omelets then you may order it well done, but we suggest otherwise.”

The relaxed vibe of the food comes through with jalapeño-bacon corn cakes, six-egg omelets and a dish called the Sneaky Pete, a party-on-a-plate mix of eggs, jalapeño-garlic-cheese bread, bacon, tomatoes and scallions—a dedication to NYC’s Kenny Shopsin, a cook, author and breakfast pioneer. The dish succeeds in not taking itself too seriously because the sum total is composed of very good parts. Kind of like Randell who could have continued to work in San Francisco and New York’s fine dining scenes but instead chose to open a casual, approachable restaurant because it’s the kind of place where he and his wife would eat. Randell cooks with the efficiency of his small kitchen in mind and the idea that breakfast is as regional as any other meal. Sweet potato pancakes come plain, a little sweeter with marshmallows folded in or with the added crunch of coconut and hazelnut. Chicken and waffles share the menu with a New York take on the breakfast burger: Lox, eggs, cream cheese, red onion and tomato sandwiched between latke buns. Randell feels he’ll know the breakfast revolution has arrived when he sees competition for the breakfast dollar. “When you have three or four places open for breakfast you’ll know that people have grasped the idea that the meal can be just as fun and just as social as dinner,” he said. And his revolution will be served with pulled pork, a sunny-side-up egg and a side of biscuits and gravy. 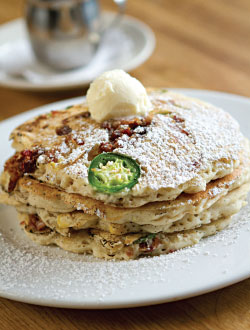 Incorporate dry ingredients in a medium bowl. Add milk and eggs and mix until wet. Do not over-mix, small lumps are fine.

Prepare griddle or pan for pancakes. Fold the creamed corn, jalapeños and bacon into the pancake base. Ladle the batter onto the griddle and flip when bubbles come to the surface. Serve warm with butter and maple syrup.