Singing as a Muppet and jamming with Keith Richards are just two of the many distinct bullet points on the resume of musician Joe Delia. The Thieves frontman with a traffic stopping resemblance to Mick Jagger has an all-inclusive musical bio that reads like a cut and paste job from three or four different artists. Delia, who toured the world as Buster Poindexter’s pianist (even arranging their dance floor anthem “Hot Hot Hot),” has also written music for Pee Wee’s Playhouse, composed the score for the film Bad Lieutenant and provided the musical backup for Richard Belzer’s HBO comedy specials. Performing with Bruce Springsteen and producing jazz legend Freddy Hubbard’s recordings are just two more vaguely incongruous examples from Delia’s career as a musical shapeshifter. “It’s all part of the gestalt,” he said.

How all of this informs his work with Joe Delia & Thieves, a Montauk-based good-time band known for throwing down a raucous brand of “high amp blues, surf music and rock and roll” is the question.
Despite having recorded or toured with everyone from Dusty Springfield to Pat Benatar, Delia’s songs and persona have rarely been out front. “Working with the Thieves is freeing…it is my project… That is a first for me,” he said, contrasting his position as chief thief with his more familiar role as ace hired-gun.

He credits his time as a top-flight studio cat in the late ’70s with cultivating the skillset required to head the band. “As a studio musician [piano player] in New York City, I had to be a jack-of-all-trades… If you weren’t cutting the gig…there was someone to replace you before the track was over,” he said. He also credits his wife PJ, the band’s manager and backup singer, for holding something as gelatinous as a rock band together.

Rounding out the Thieves are: Klyph Black (guitar), James Benard (drums), Randy Hudson (guitar and bass) and Mick Hargreaves (bass). “We don’t do songs with more than four chords,” joked Delia, who brings plenty of his studio-honed piano chops to the mix. While the bluesy ballads and proto-punk rockers off the band’s 2011 debut Smoke and Mirrors are usually grounded in a simple structure, the music has a bracing immediacy that elevates the basic blueprints, capturing all the soul and swagger of early rhythm and blues, gospel, punk and rock.

While Delia only embraced the role of lyricist when he formed Thieves three years ago, there have been sporadic successful immersions since the beginning. Delia and his brothers (The Bruthers) wrote the “pre-punk pop” Muppet number they performed on the Ed Sullivan Show in 1966. “In many ways I’m doing the same act I did back then and that is a good feeling,” he said. The genre-blending musician has also contributed songs to the films he scored. “Abel Ferrara [director of such Delia-scored films as King of New York and The Blackout] would say, ‘We got to fill this spot, write a good song,’” Delia deadpanned. 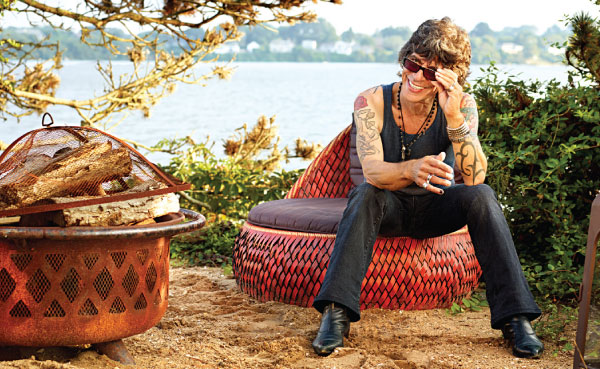 His Smoke and Mirrors ballad “Under the Montauk Moon” showcases his songwriting talents in a bittersweet story-song sung from the perspective of a fully fleshed out character who realizes he must rely on human love to survive, despite a long-standing infatuation with the summertime haven he calls home. “I didn’t know I could write a song like that,” he said proudly. “Sexting” is bathed in the gloss of disco-era Stones with both Delias trading titillations. The unsuspecting listener is placed in the role of voyeur. While PJ rocks with a sultry and broad-ranged voice, her husband’s delivery may conjure the smoky rasp of Richards and the unflapple talk-croon of Lou Reed. Tempered by a layer of blue-eyed soul, it draws the listener in.

Springsteen’s drummer Max Weinberg, a longtime friend of Delia’s, made contact from the road. Weinberg not only appears on the Thieves’ inaugural cd, but the pair has done everything from touring with Dave Edmunds to producing albums together. Besides lauding his friend as a musician, the drummer related a very personal anecdote that highlights Delia’s ability to inspire other musicians. “Joe pointed out to me that my greatest drumming strength was to ‘chop wood’… playing that big beat of mine, simple but strong—that should be my calling card,” Weinberg said of the 1974 exchange. “It made me a better drummer and I landed the Springsteen job in no small way because of Joe.”

Delia has not lost the ability to spark his musical mates. At a recent Swallow East gig in Montauk, the band’s live version of “Montauk Moon” heightened the lush summertime vibe even following great renditions of such classics as Stevie Wonder’s “Isn’t She Lovely.” The musicians seamlessly traded lead vocals, yet it all revolved around Delia positioned front and center. Depending on the genetics of the song, Delia fronted with slithering sensuality or icy cold intensity. Discussing what he learned from Poindexter on fronting a band he said, “He always put himself up in the face of the audience, which is what you have to do.”

Happily ensconced in Montauk with PJ and their sixteen-year-old son Jake, life is good. There are plans for another Joe Delia & Thieves cd and for the band to play more gigs up-island. There is a National Lampoon filmscore in the works and he will be writing for Weinberg’s swing band as well. Whether Delia mines his past or his present, his increasingly textured resume will continue to serve as a springboard into his future.