a brush with sandy

In the wake of Superstorm Sandy, Long Islanders in need received an abundance of material, nourishment and financial help from their neighbors. This generosity continues with the juried art show A Brush with Sandy at Environ Vision Designs, a new artist space and gallery in Massapequa. But this is more than just a fundraising art show with proceeds from sold works going to Sandy relief. The contributors, all from the greater metropolitan NYC area, turn their artistic eyes to the strong impressions imprinted on their psyches by the storm and its aftermath. 2D and 3D works will stand in silent testament to the kineticism and chaos of the storm. Depending on the jury’s decisions, installations and performance pieces will augment the show. 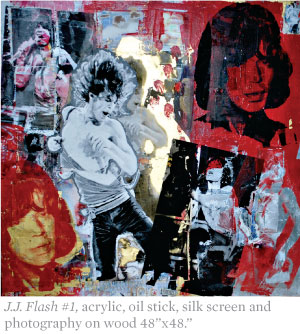 The image of the rock idol in a sneering pose or in the throes of ecstasy on stage is the stuff of pop culture legends. Steve Joester, a British-born rock photographer who moved within the same rarified circles as photog legends Mick Rock and Bob Gruen, takes those images one step further. His work immerses the black and white, familiar visages of Mick Jagger and the Rolling Stones, Debbie Harry, Neil Young and Sting in a colorful psychedelic canvas. Joester goes outside the standard palette and employs such unconventional materials as oil stick, nail polish, burlap, solder and gold leaf paint to “[echo] the raw energy of rock ‘n’ roll,” and convey “the emotion and power of the live performances,” as he put it.

Steve Joester: People Performing Themselves will be exhibited through September 24 at Lawrence Fine Art in East Hampton. (631) 604-5525, lawrence-fine-arts.com.