Todd Jacobs has come home. The East End chef who won deserved plaudits for his efforts at The American Hotel in Sag Harbor and Tierra Mar in Westhampton Beach returned recently from a relatively short stint in Nassau to open his own place in Bridgehampton.

Mr. Jacobs, who has been a mover and shaker in the farm-to-table concept from the get-go has appropriately and accurately named his hot new restaurant simply “Fresh.” And so it is.

He has taken over the barney, rustic building previously occupied by Southfork Kitchen and turned it into a farm-to-table new American Mecca. His emphasis is on natural, local ingredients combined into organic, raw, vegetarian or gluten-free dishes many of which come in two or three portion sizes and price points. Quarter-pound, half-pound and one-pound options as well as single order, double order, half breast and whole breast possibilities dot the menu. All of which give diners the opportunity to order and eat non-traditional meals featuring more diversity and dishes than they ordinarily would. 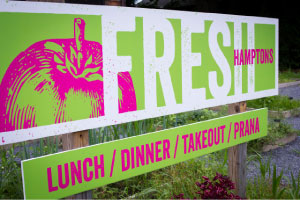 It’s working. Every table was full on the night I visited a few weeks after Fresh’s May 16th opening. Some people were even lingering among the herb, vegetable and flower garden patches in front of the restaurant waiting for their turns.

Multiple starter choices including soups, salads, small plates and iced shellfish are the opening salvos at Fresh. Just think of small plates as appetizers and jump in. That’s what we did, selecting three of them and the hearty leek and potato soup with crème fraîche and chives ($8). The two halves of barbecued duck spring roll with plum wine sauce delivered an admirably mellow, big flavor ($10) while the Mecox Bay Dairy raw “Fresh” summer roll has plenty of roughage wrapped in a collard green leaf with a few squiggles of tomato, chipotle vegan aioli ($8) to give the whole vegetarian assemblage only a mere hint of flavor.

There are also numerous sides at $5 and $9 per item depending on portion size. The combination platter of sides for $20 makes financial and culinary sense. Think potatoes—top-notch hand-cut fries with organic ketchup and roast garlic whipped potatoes led the parade. The Thai red curried spring vegetables yielded little or no spicy kick (despite warnings), the lemon basil quinoa was a nearly anonymous amalgam while the oven roasted roots were a lively, earthy treat.

There were no letdowns among the main events. The wood-roasted organic Scottish salmon was a pristine slab absent any strong fishy flavor ($32), the pan roasted Raleigh Farms organic chicken was everything that chicken should be but rarely is: Moist, tender and tasty ($24). A single (or small) order of bouillabaisse was a subtle rather than robust version of the French classic ($18), while a rack of lamb special was a superior version of this often-seen favorite (2 ribs $18).