One by one the party tents have closed. The outdoor art shows have returned to their gallery walls. The deep green has slowly leached from the polo fields. September’s chill has crept in, effectively ending the summer-long romp through the high-profile majesty of our favored season.

After all, who is September to tell us what to do? We who have spent our season in audience at the playground of the wealthy deserve more time for our pursuits. We refuse to be chained by fall’s cruel shackles. But where can we slip free from this autumnal torment and extend our season? Where can we go to not only enjoy the caliber of dining and leisure found in the Hamptons, but in a gentler climate?

The answer lies 700 miles and several worlds away.

Hilton Head Island, South Carolina, may lack the sprawling fields of the Hamptons, and its celebrities and events may smack of the small time when viewed through the weary eyes of a jaded New Yorker, but that culture of casual refinement so ingrained in our summer happenings here, finds an interesting analog in Hilton Head’s refined-yet-understated ethos. Consider it the laid-back yin to the Hamptons yang. After all, despite Hilton Head’s cultured reputation it’s hard to be too uptight when you’re in the middle of nowhere. 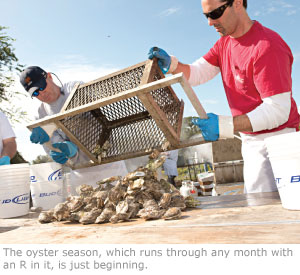 Its relative isolation at the tip of the South Carolina Lowcountry may contrast sharply with our position at the edge of NYC, but Hilton Head shares all of our Island’s appreciation for the arts. It’s just that it’s not unusual to attend a gallery showing or a play in flip-flops. Polo is even part of the culture, with regular matches off-island at Rose Hill (where famed jockey Eddie Maple serves as equestrian director), but you’re just as likely to find domestic beer as champagne in the recycling bins afterward.

Part of this supremely relaxed vibe comes from the never-under-50-degree weather. But a lot of it comes from the sandbox this island provides for those retirees still capable of cutting loose. Residents have worked hard to get where they are and the time has come to reap the rewards. And that means never having to wear dress shoes if so inclined, even to an art gallery. After all, a trip to the beach could soon follow and who wants to get sand in his loafers?

“It’s a little piece of paradise. A little bit of heaven, too,” said former Long Islander Joe Gianferrara. Joe G, as he’s known around Hilton Head, retired from a straight-laced life and a career with Hart Schaffner Marx in the ’90s, moved away from his Mount Sinai home and soon took up a second life as the bongo player for White Liquor, Hilton Head’s preeminent Rolling Stones cover band. A hard-partying fixture on the late night scene, the stories surrounding him are legendary. Lowcountry life turned a mild-mannered Long Islander into rock royalty. Imagine what a weekend can do for you.

The shoulder season
Visitors in September will find the island at its ripest for a weekend visit. The start of the school year keeps the families at bay and most of the male bonding golf outings already happened in the summer. The result is a semi-tropical, perfectly temperate wonderland that you essentially have all to yourself.

At long last, it’s possible to kick back and watch coeds play beach volleyball at the Tiki Hut without having to elbow through a crowd twelve deep for a drink. And the mobs at Coligny Plaza have dispersed, allowing for easy shopping conquest.

The mild temperatures may allow for less time in line and more time at the beach, but don’t expect to go swimming. The change in season does little to shake the sun’s warmth from the sand, but the murky brown waters surrounding the island swiftly go from bath water-warm in the summer to fairly cold some time in September.

Who needs to swim when the cooler temps open such a harvest of tee times anyway? 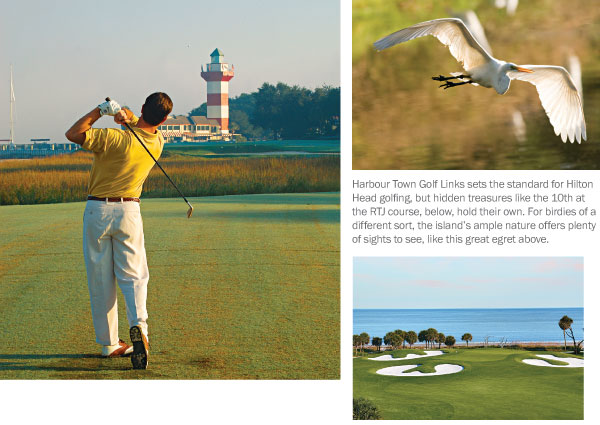 The mild weather keeps the courses playable well into winter; average temps hover around the mid 70s into Thanksgiving territory. Obviously the first choice is Harbour Town Golf Links, here you can play where the pros play the RBC Heritage. But if Harbour Town is booked, your next best bet is probably the Robert Trent Jones Course in Palmetto Dunes. Partially because of the wicked fairways and water views and partially because you can sneak through a hole in the fence by the 10th green and grab a cocktail at Coco’s Beach Bar. You did not hear this from us.

The nature of things
Even the golf courses here show a deference to the natural world, an essential part of Hilton Head’s culture. The high-rise hotels that line the beaches of the Southwest from Miami to Myrtle Beach have no place here thanks to a long-standing edict against any structure taller than the tallest tree on its property.

Instead, the shore peels back from the ocean to a rolling sea of sand dunes that gradually succumb to the great forest. The golf courses embrace the natural contours of the island’s tidal marshes. Even the shops lie hidden behind a town-mandated buffer of trees. The result is a feeling that you’re always lost in the wilderness. That feeling only intensifies as you find yourself staring down a twelve-foot gator sunning himself on the banks of one of the island’s ubiquitous ponds or a copperhead snake that decided to make himself comfortable on your hotel porch. In either case, you’re more afraid of them than they are of you. Stay back.

Not all of the island’s nature exists solely as nightmare fuel, though. If you want to really see the Lowcountry’s natural splendor, duck between the bridges to the narrow crumbling strip of asphalt that leads to Pinckney Island National Wildlife Refuge. Here fiddler crabs brave the exposed pluff mudd flats between tides to skitter about in search of food, weaving between oyster beds, watchful of the many birds circling. Sit for a moment here, on a bench at the edge of the civilized world. Kick off your mile-a-minute New York state of mind and remember that even our own coast was once wild.