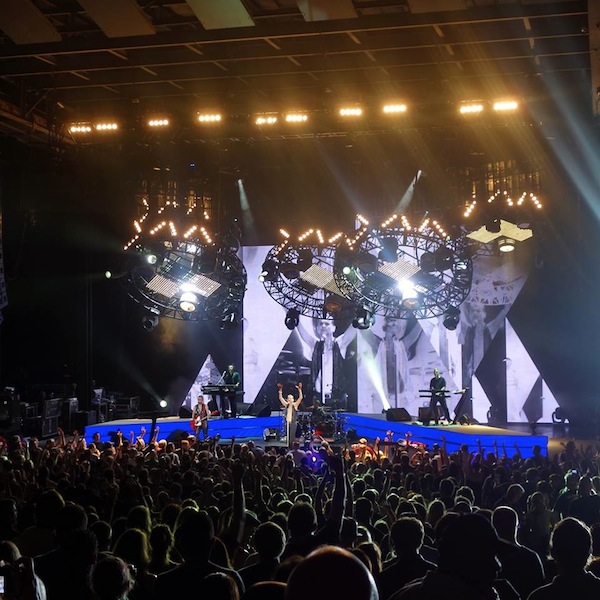 From “My Little Universe” by Depeche Mode

With over six million followers on Facebook, Depeche Mode’s universe keeps expanding. The British techno rockers (aka electro-goths) first performed as Depeche Mode at a school gig in 1980 and, since 1995, (when keyboardist/drummer Alan Wilder departed) the band has been a trio of original members Dave Gahan, Martin Gore and Andy Fletcher. The most popular electronic band worldwide has influenced musicians as diverse as The Killers, Linkin Park, Cold Play, the Deftones, Arcade Fire, Shakira and Gary Numan. DM released their 13th album “Delta Machine,” a more bluesy, synth-infused record, in March.

Gore has said the US tour aims to teach new bands “how it’s done” and, so far, the response has been stellar. DM opened the North American leg of the Delta Machine tour in Michigan to rave reviews. They’ll hit NY on September 6th for a show at Brooklyn’s Barclays Center and will rock the Nikon at Jones Beach Theater on September 8th.

In addition to Gahan on lead vocals, Gore on guitar and Fletcher on bass, the band will be accompanied by Christian Eigner on drums and Pete Gordeno on keyboards. The band has always been known to show more muscle live and this tour is no exception with longer than usual sets featuring a mix of fan favorites, hits and new songs. There’s also an acoustic interlude sung by Gore.

While you’re likely to hear “Enjoy The Silence,” “Personal Jesus,” “Walking In My Shoes” and “Never Let Me Down Again,” you might also hear “Shake the Disease” and the much-loved 1986 B-side “But Not Tonight.” Catch them while you can.

For more info: DepecheMode.com and livenation.com