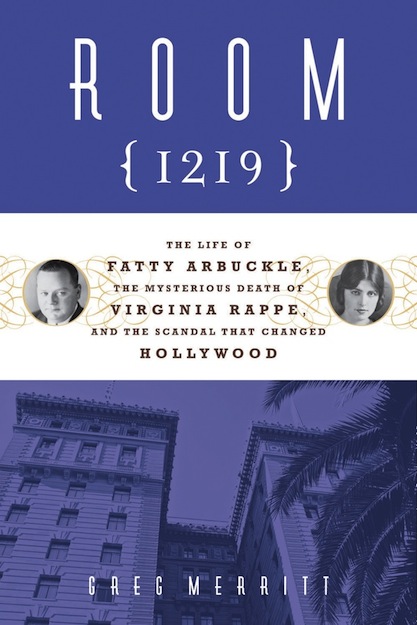 You couldn’t really sleep that night, either, so you stumbled to the sofa for some Bad TV—and were surprised to find that late-night viewing isn’t so bad after all. You actually, in fact, found an old black-and-white movie that was pretty decent.

But would you be surprised to learn that in the beginning, Hollywood, despite the innocence of the time, could be very indecent? In the new book “Room 1219” by Greg Merritt, you’ll see how.

His mother’s late-born lastborn, abandoned by his father, Roscoe was always a big boy. Other children teased him about his weight but his mother indulged him unabashedly, so in 1895, when he skipped school in favor of appearing on-stage with a comedy revue, she looked the other way. The “chubby eight-year-old,” as it turned out, could really act!

From there to vaudeville to movies (a new medium that initially embarrassed him), Arbuckle, along with his friends Charlie Chaplin and Buster Keaton, honed his sense of comedic timing to become one of America’s best-loved early stars. By 1921, he was wealthy, popular, and in-demand for parties.

It was at one of his own parties that Arbuckle met Virginia Rappe.

Born in 1891 to an unwed mother, Virginia Rapp added an “e” to make her name “more exotic” when she was just sixteen. By then, she had her sights set on being a fashion designer (another “infant industry”) and was quite talented. Like so many young women in Hollywood, she also had hopes of being in the movies and had appeared in a few “flickers.”

On September 3, 1921, at the Hotel St. Francis in San Francisco, Prohibition liquor flowed and Roscoe Arbuckle the star sat talking to Virginia Rappe, the starlet. Arbuckle, who paid for the party, thought he might’ve seen Rappe before, since they’d worked for the same studio. They had many other things in common, too, and they may’ve flirted—though Arbuckle was married.

And then Rappe had to use the bathroom. Minutes later, Arbuckle followed her through the hotel’s bedroom, and locked the door. What happened next ended Viginia Rappe’s life and Roscoe Arbuckle’s career.

But what did happen? Movie fans have been asking that question for nearly a century, and in “Room 1219,” author Greg Merritt looks at the evidence.

Anecdotes and rumors still swirl around Arbuckle’s name, and Merritt disproves lies and debunks myths in this true crime book, but that’s not all. He also gives his readers a sense of what life was like in the 1920s, including the beginning of the movie industry and our infatuation with Hollywood stars. I was very astounded to see what the media was able to get away with, back then. Read this book, and I think you will be, too.

True crime fans may find too much film history in this book, but movie buffs will absolutely love it. If you can’t get enough of the “flickers,” then “Room 1219” is a book to toss in your cart.