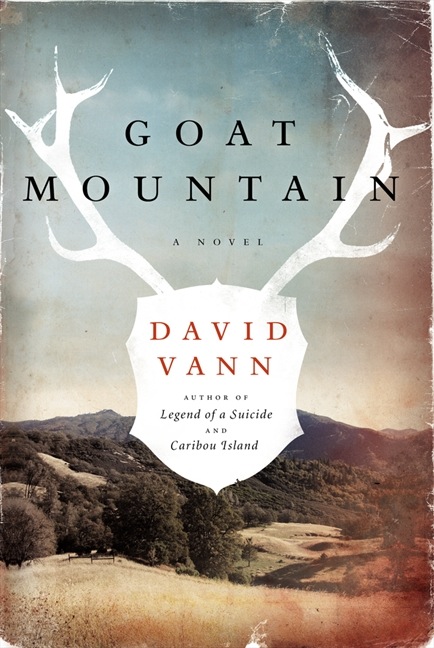 It’s always about the hunt.

It doesn’t matter whether the stalk takes place on an isle or down an aisle. Makes no difference if the prey has a rack or is on a rack. Could be elusive or expensive, it’s a hunt just the same.

The thing is, you never forget your first meaningful hunt. And in the new book “Goat Mountain” by David Vann, that’s doubly true when it goes so terribly wrong.

He had been to the hunting camp before.

Each year, his father; his father’s best friend, Tom; and his grandfather took him on the long ride through land that had been in the family for ages. Up hills, around winding roads, across cliffs that made him believe they’d crash and die. He stood in the back of the truck and watched for deer.

This year, his eleventh summer, he’d be allowed to shoot one.

His rifle wasn’t nearly as powerful as the one his father carried or the one Tom owned. Still, he’d been shooting the .30-.30 for two years, anticipating this week. He was angry, sometimes, that he’d been born too late: he’d seen photos of hunts past, and wished he’d been there.

And then they got to the gate.

His father had poacher-proofed it, secured it against gun and truck, but that didn’t seem to matter: Tom saw a poacher sitting on a ledge some two hundred yards out. It angered him; it angered them all that this man was trespassing, scaring away their deer. So they decided to scare the poacher.

Leaning against the hood of the truck, his father dropped a shell in the chamber of a .300 Magnum, aimed, and drove the bolt home. On the ledge, there was no reaction to the click, so his father offered him a peek through the more-powerful rifle.

Through the scope, he could see rocks and dust. He could see everything: clothes the poacher was wearing, his skin, his jeans as he stood up, having noticed the glint of something, maybe a rifle in the hands of an eleven-year-old boy.

Then that boy squeezed the trigger…

There you have a synopsis of the first chapter of this book. But could author David Vann sustain the heart-pounding drama here?

The answer is a resounding “yes.”

Told from the obvious point of an adult who was once that boy, “Goat Mountain ” takes readers through incredible beauty, lush views, and breathtaking landscapes, down into a sharp cone of grieved madness and brutality. It’s easy to think the boy is a brat; easier to think he’s a monster, but Vann teases out his storyline until we’re not really sure where evil lies or where it came from. I like that in a novel, and I loved this one.

So pour yourself a cold one this week, settle into your easy chair, and be ready to miss a lot of sleep. You’ve been waiting a long time for a novel that’ll capture your attention like this does, which makes “Goat Mountain” the book to hunt for.