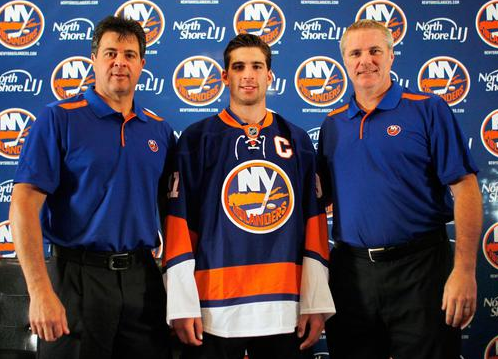 The collective majority of Islanders fans were upset to see Mark Streit traded to Philadelphia. He was the team captain and a model of consistency during his short, yet successful stint on Long Island.

Aside from seeing him a handful of times a season as a division rival, this also meant an opening for a new captain. And that only meant one thing; John Tavares would be the rightful choice to lead the club.

At a press conference earlier this month at Bethpage State Park, Tavares was named the 14th captain in franchise history.

“I’m honored to be named captain of the New York Islanders,” Tavares said. “To represent my teammates, coaches, management and the incredible fans that support this historic franchise is something that I take seriously. My experiences over the past four seasons have prepared me for this responsibility and I look forward to the challenge of leading the Islanders each season as we contend for the Stanley Cup.”

First overall pick, Hart Trophy finalist, and 249 points in 291 career NHL games. He didn’t need the “C” to justify anything, but the soft-spoken lead-by-example star is now the proverbial face of the franchise in every sense of the words.

He joins a list of good men, strong leaders and respectable hockey veterans during their respective careers. The longest tenured captain was Denis Potvin, who served nine seasons with the “C” from 1979-1987.