A person’s face tells his life’s story. It’s in the furrowed brow or the dimples shelving a smile. And the further we scrutinize any face, the more we begin to understand it, or at least we think we do, until we get so close that it becomes abstracted.

Post-war American master Chuck Close knows this better than anyone; he’s been painting faces for almost fifty years. He’s celebrated for his oversized, hyper-realistic portraits that convey the life stories of his friends and family. Over his career, he’s painted Hillary Clinton, Kate Moss, Philip Glass and countless other luminaries, too. But get closer to any one of these portraits, and an array of fresh connotations explodes off the canvas.

In 1967, after rejecting his Abstract Expressionist leanings, Close made a bold entrance into the art world with a self-portrait composed of black acrylic spray paint. “I was desperate. I wanted to stop painting de Kooning look-alikes. I wanted to make something new, something unique and personal. So I imposed limitations on myself, throwing away my brushes and opting for a spray can that forced me to paint differently,” Close said.

His breakthrough portrait was staggering in size (7-feet by 9-feet), overwhelming his audience, but the real coup was Close’s highly innovative technique. The painting was so precise and detailed, objectively highlighting every faultfinding wrinkle and skin perforation, that many people assumed it was a photograph. “I remember people would pause to look at it, swearing it was a photo. And the fact that something as artificial as applying paint to a canvas could portray something so real is still a mystery to me. It’s this pull between reality and artificiality, and the actual process of painting that excites me each time I approach the canvas,” he said.

Close’s method is often laborious and repetitious. With every one of these gargantuan portraits, he initially deconstructs a small photograph by overlaying it with a grid that subdivides the image into thousands of tiny squares. These boxes are then proportionally transposed to the larger canvas. From there, using the original photograph as a reference, Close will proceed to color one three-inch square at a time. “There are thousands of boxes to paint. I mean, some paintings have taken over a year to make. Who has the patience to do this, right?” he laughed. “But I have to work this way. It’s the only way my mind can absorb the information.”

Close is referring to the learning disabilities that have undeniably informed his aesthetic. He suffers from face blindness (the inability to recognize faces) and dyslexia, which requires him to break everything down into increments in order to work effectively. “I don’t think it’s a coincidence that having face blindness, I paint people’s faces,” he laughed. “It’s my way of getting closer to people. When I paint someone, it’s always a person’s face I want to remember.” 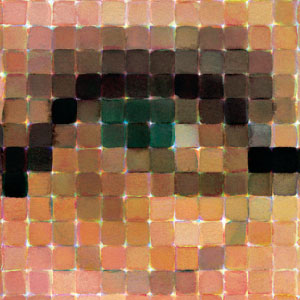 In 1988, at the age of 48, another life-changing event would impact Close’s artwork. A blood clot formed in his spine, leaving him paralyzed from the waist down. And perhaps when most artists would have thrown in the proverbial white towel, Close only pushed forward. “I couldn’t wrap my head around not painting again. It’s the only thing I knew and loved to do. And plus I had a family to take care of.”

From a wheelchair he began to paint again, using a customized hand brace that enabled him to hold his brush with both hands. But this time those endless boxes he labored over appeared brighter and more cheerful. “I was the happiest person on the planet, just to be painting again. I was alive and working, even if it was from a wheelchair.”

After the accident, Close’s portrait work became not only more colorful but increasingly abstract as well. The spaces he once meticulously colored in were now filled with “dumb gestures,” he said. “It could be a hotdog or doughnut shape. They’re crude looking, inarticulate. And at most there are five or six colors within in each box.” However abstract and fragmented these poetic eruptions appear at arm’s length, further back from the canvas the sum of the parts cohere into an uncannily real human face. “I was interested in orchestrating a new experience that was visually honest. I was putting pigment on a canvas. There’s no denying that anymore. You could see the brush strokes.”

Close’s affinity for creating something novel inspired him to explore various mediums throughout his career. Recently, he’s embraced some newer technologies too, like programming a computer to print various layers of watercolor onto a canvas.

This brilliant innovation creates the natural saturation of a watercolor, but the image can also be reproduced infinitely as if it were a print. “I assembled the colors and the computer put them together. It’s amazing how precise a computer can be working with light and color and water,” he laughed.

Whether he’s using a felt pad stamp to design his latest work or repurposing an archaic 19th century jacquard tapestry technique, Close is always persistent, maybe even a tad obsessive, in depicting the human face. To stand in front of a six-foot-tall, sharply detailed tapestry of iconic songwriter Lou Reed is to come face-to-face with the melancholic grit and honesty that Reed’s songs are known for. And despite the thousands of little squares Close has toiled over, Reed’s image, like all Close’s subjects, looms larger than life, commanding the attention of the entire room with its singular splendor.

But perhaps the real beauty of Chuck Close’s story is that in spite of his many physical and neurological setbacks, or maybe because of them, he’s still painting today. And in the process, he’s assembled an artistic oeuvre that’s historically significant not only for its grandeur and impact, but also for its sheer innovation. The artist who can’t remember faces shows his viewers that the closer you get to the physical visage, the more you might see.

Chuck Close’s work will be featured at Guild Hall in East Hampton through October 14th. Visit chuckclose.com for more about the artist or guildhall.org for details on the show.