Some music critics and fans make the mistake of viewing Rosanne Cash’s career through the prism of her legendary dad. The fact is that Rosanne Cash has carved out a unique career path. While that path has at times certainly been influenced in both subtle and more direct ways by her father, as well as her stepmother June Carter, Rosanne Cash has emerged as one of the great songwriters of the ever-flourishing singer-songwriter movement. She has also defined the movement and collaborated with others who have kept the scene alive for decades. Her distinctive country-inflected voice is equally at home covering a wide array of genres and styles from a myriad of time periods, or doing her own classic songs.

Cash’s roots are firmly planted in country music, but she has risen above the mediocrity and show-business Nashville country sound of today. Her songs don’t come easily and owe more to the folk and singer-songwriter process. She is one of the rare performers who can walk on stage with just a guitar, her songs and bounty of musical knowledge and entertain an audience of any size for an entire evening. Her writing extends to prose, as well. She has written for various newspapers and magazines including The New York Times, Newsweek, Rolling Stone and other giants. She is the author of a collection of short stories Bodies of Water, a children’s book Penelope Jane: A Fairy’s Tale and a memoir, Composed.

The road has not been easy for Cash. Escaping the looming shadow of one of the most famous and influential figures in American musical history wasn’t her only challenge. There has been the loss of family and friends and a divorce from her first husband, Rodney Crowell. There was also brain surgery in 2007 from which she fully recovered. But for decades the country girl has been living in Manhattan with her husband, producer John Leventhal. She and Leventhal have a son and she has three daughters from her marriage to Crowell.

It’s a rich, full life that includes a vast circle of music, family, friends, writing and not forgetting where you’ve come from, but clearly being your own person.

Long Island Pulse Magazine: How does your new album differ from past works?
Rosanne Cash: It’s the first album that John and I co-wrote all the songs, except for one we co-wrote with Rodney Crowell. I think the songs are more outer-directed, more third person stories, more imaginative scenes, than a lot of my past work. Also, a lot of cities show up in these songs and I don’t think I’ve ever written so much with particular places in mind—Memphis, Florence (AL), “The Sunken Lands” of Arkansas, Barcelona (on the way to Memphis), Mobile… 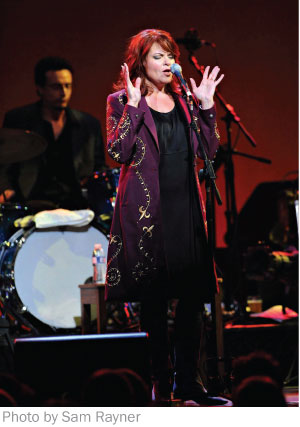 LIP: You originally started in the country field but moved into a more pop direction, yet your songwriting feels like part of the folk process.
RC: Yes. I was living in Los Angeles and I got signed to a record label and it was the Nashville division that wanted to sign me, so suddenly I was “country.” And I had a nice time doing that for a decade and I had a lot of success. But truthfully, I didn’t feel completely authentic, even with a pile of number one records. I wanted something that felt more resonant to who I was, to what I loved, to the phrases and melodies I heard in my head. And I made a record called Interiors, which was the first time I really got it down on paper… the country division let me go and it was nominated for a Grammy in the folk category. A lot of times “country” and “folk” are marketing terms and don’t really define what the artist is actually doing. The duet I did with Bruce Springsteen on my last record was nominated for a Grammy in the pop category. It didn’t belong there. It was more country than 90 percent of what is on country radio… I don’t worry about any of this. I do what I’m inspired to do.

LIP: What’s it like having your husband be your musical partner and also the fact that he is a highly successful record producer in his own right?
RC: We complement each other’s strengths and weaknesses. As a friend said to me, “You two would make ONE fantastic person!” Seriously, I admire him so, so much. He has much more musical knowledge than me. I’ve learned so much from him. Luckily, he’s not really a singer and doesn’t write lyrics that much, so there are still a couple things I can do that he can’t. But that’s about it.

LIP: There are many literary and musical artists, like Steve Martin, Kinky Friedman and Jimmy Buffett, who seem to move between theses worlds very effectively. Have you talked about it with other musicians?
RC: Yes, John Wesley Harding [Wesley Stace] is a good friend and he has a restless and brilliant mind—he also does seminars and writer-in-residence stints at universities—and we’ve talked about writing a lot. Joe Henry and I talk endlessly about poetry, rhythm, word-wrangling and such. We pass works-in-progress back and forth… I have many friends who are writers, editors, publishers—including several other musicians who are also prose writers (Chely Wright, Rodney Crowell and others) and they all inspire and challenge me.

LIP: Are you ever writing something and feel unsure of whether it is going to become a song or prose?
RC: A couple times I’ve pulled something from a prose piece and used it in a song. But I don’t think I’ve ever started a song, or an essay, and thought “I don’t know if this will be a song or not.” No. That doesn’t happen. I pretty much know which territory I’m entering. But then, sometimes one filters into the other.

LIP: Do you still feel like you’re a musical artist first and foremost?
RC: I suppose I think of myself as a songwriter first, although I don’t go around thinking about titles for myself much. I’m a songwriter and musician and prose writer. Not much of a dancer.

LIP: You also have a background in theater and film. Are you going to be acting in the film version of Ghost Brothers of Darkland County written by John Mellencamp and Stephen King?
RC: No, I was never going to do that. I never wanted to. I sang on the record, period. I went to the Lee Strasberg Theater Institute in my early 20’s and it was a great, great experience but I have no desire to be an actor. But never say never, right?

LIP: Your album Black Cadillac was your most overt work to reflect the life of your father Johnny, your stepmother June and your mother Vivian. The List was also a very organic and personal way to pay homage to your dad. Have there been moments when you questioned this tricky balance?
RC: Of course. Moments when I thought I had pushed too far away, when I realized I could have embraced my own legacy more. But The List was a resolution of all that. There was never a time when I felt I used my Dad or his name or traded on him to achieve something in my career—never. I was so, so careful.

LIP: What was it like to go on tour with your dad and spend time on the road with folks like Maybelle Carter and Carl Perkins?
RC: It didn’t seem like that big a deal then—I was a young girl, on the road with my dad, which I had done before, and these were the people on the road with him for years—I knew them all. So it just seemed very normal. I spent a lot of time in the wings, watching my dad, in the dressing room learning songs from Maybelle and Helen and Anita and June, and on the bus, talking about music and everything else. And stopping at antique stores on the way to the next town, because that’s what June liked to do on the road. It was so much fun. It was a big life and I learned a lot, not only about music but about living out in the world, traveling, staying in nice hotels, meeting a lot of people. It was an education, in so many ways.

LIP: Did you feel the film Walk The Line was an accurate portrayal of your dad’s life?
RC: Factually, it was pretty good. Not perfect, but pretty good. In portraying his essence, who he really was, the greatness of his artistry, his paradoxes, his complexity and the complicated story of my family? No. Impossible to do that in a two-hour Hollywood movie.

LIP: Is there a favorite album, book or movie that has been particularly resonant to your life and work?
RC: So many. As far as artistic discipline, I love Steven Pressfield’s The War of Art and Austin Kleon’s Steal Like An Artist, I enjoy a lot of what Seth Godin has to say, even though it doesn’t directly apply to writers and musicians. I was really inspired by Dylan’s Chronicles—it gave me the courage to write a memoir that wasn’t linear. Miles Davis opened my mind in a whole new way when I first started listening to him in 1990. It was like putting my mind on a stretching machine. Barber’s “Adagio For Strings” makes me feel that music is the greatest healing force in the universe. So many great writers—Tolstoy, Alice Munro, Jane Austen, Gabriel García Márquez—just make me glad I’m in the world. But as a child, my dad’s record Ballads of the True West struck my young heart deeply—I have wanted to create a concept record that vivid ever since I heard it! Then, shortly after that, The Beatles made me want everything.

Rosanne Cash will appear at the Landmark on Main Street in Port Washington on November 2nd. Her new album The River and The Thread will be released in January 2014.