Any chef worth his salt has a good knife, but honed steel alone can’t make a great meal. Down south, it might be the well-preserved luster on a cast-iron pan. In Brooklyn it’s the worn handle of the peel a pizza maker uses to load pies into the oven. In Kent Monkan’s kitchen, the prized tool is his 60-pound meat grinder, because a life-affirming burger is no accident. And neither is a deep fried, sausage-wrapped egg, which might be the best pub grub on either side of the pond.

Before he could master the grind of his custom sausage, Monkan began with the burger. Like many new restaurants he used pre-ground meat from a butcher when he opened The Brass Rail in Locust Valley. “Everyone raved about his burger meat. Sometimes it was good, sometimes it wasn’t so good after a day,” he said. “I didn’t trust what was coming to me.”

Monkan knew when a burger combines flavor, fat and texture in the right way it elevates the humble patty, making it a dish worth traveling for. A good cow helps, but a great burger isn’t born, it’s made.

That’s when he took to grinding burger meat in-house, first with an attachment for a KitchenAid mixer, which was too slow, then with a Vollrath. “We experimented with different blends of beef and different fat ratios,” Monkan said. “It took about a month of just seeing how the consistency was and how it was received.” Now he has two of these blunt, stainless steel, tabletop machines producing about 70 pounds of burger meat daily.

While conceptualizing his second restaurant, gastropub Heirloom Tavern, Monkan reached back into his past for a small dish that delivered big flavor. As a culinary school student in the Hudson Valley, he visited the bars and restaurants in town and nearby Rhinebeck where he had his first Scotch egg. The boiled egg engulfed in sausage meat, rolled in breadcrumbs and fried, was developed by a British department store in 1738, before becoming a fixture on local pub menus. “It’s a perfect little plate,” Monkan said. “You have one and you feel like you had something special.”

Given his affinity for grinding, it’s only natural the Italian-style pork sausage used in the dish is ground at the restaurant. Made to order, the Scotch egg is a careful dance between cook and yolk. “Eggs are all about timing, five seconds too long and your eggs are overcooked,” he said. When done correctly the center of the egg oozes a bit, nestled within a ring of firm but creamy yolk. Monkan serves it with cream-based country gravy made with bacon and sausage.

“The butcher laughed at me when he questioned why I wasn’t buying meat from him anymore,” Monkan said. “He thought it was crazy that I was going to grind my own and that I’d be calling him again in a couple of weeks.” That was four years ago. 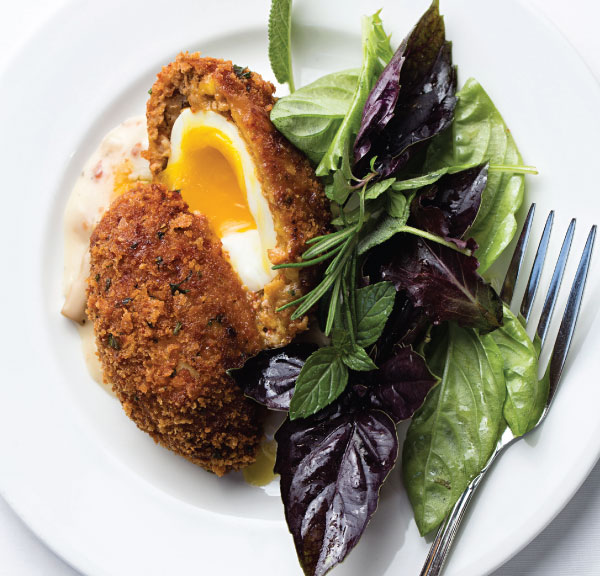 Bring a small pot of water to a boil. Gently add 8 of the eggs and cook for 4 minutes. Remove the eggs from the boiling water and submerge them in a bowl of ice water to stop further cooking. Peel when cool enough to handle then set them aside. Remove sausage meat from casing and divide into 8 equal portions. Use hands to shape sausage into thin disks. Place a peeled egg in the center of each disk and form the meat evenly around the egg.

Pour the vegetable oil into a large pot and bring to 350º using a candy thermometer. The oil should fill no more than 30 percent of the volume of the pot but also be at least 3 inches deep. In three separate bowls place the flour, two beaten raw eggs and panko. First coat the sausage wrapped eggs in the flour, then egg wash and finally the panko. Press panko on gently to assure adhesion. Using a slotted spoon or handheld strainer, gently place four of the coated eggs into the hot oil. Adjust the heat on the stove to maintain 350º oil temperature. Cook for approximately three minutes or until golden brown. Remove from oil and place on absorbent paper. Season with salt and pepper. Repeat the process with the remaining eggs.

To Serve: Slice the egg in half on the long and plate on dressed greens. The sausage should be fully cooked and the yolk should be creamy.