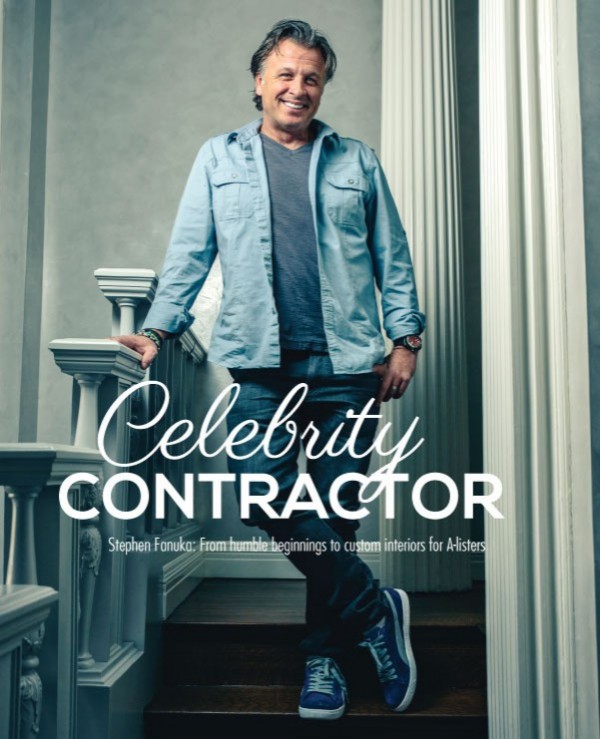 “Contractor to the Stars” Stephen Fanuka works on some of the highest-end properties in NYC for clients like Beyoncé, Michael J. Fox, Tony Bennett, Tina Fey and soon Bruce Willis. He credits his success to his father, Radenko, who Stephen described as unequivocally old school. It was his father who founded the family cabinet making business, but it’s the younger Fanuka who transformed it into the renovation firm the biggest celebrities seek out for their personal projects. And in the process, he’s become a star of his own…

From his first job, a renovation for a relative of Imelda Marcos, Fanuka’s reputation for quality and creativity grew, as did his celebrity client list and accolades. The third season of his show, DIY Network’s Million Dollar Contractor airs this month. The show chronicles the ups and downs of finishing multimillion-dollar renovations on time, on budget and to the exacting requirements of Fanuka and his clients. Bouncing around from job to job—a dozen or more at any time—Fanuka fluctuates between the easygoing charmer who massages the concerns of his high-profile clients to a blue collar craftsman, which helps him get the best out of his team.

He’s the middleman between what clients want and what a contractor can deliver. It’s his job to turn the ideas of acclaimed designers (Eric Cohler, Jacques Grange, Thom Filicia and Gordon Kahn, to name a few) into living, breathing, tangible interiors. And that’s the goal of the show: Introduce ahead-of-the-curve ideas into vanilla, cookie cutter interiors for transcendent results.

Long Island Pulse: How has your approach changed now that you’re on tv?
Stephen Fanuka: I approach every job the same. Have you ever heard the phrase “I don’t do windows”? Well, I do windows—I’m not a diva. I don’t care if it’s a million dollar job or a $100 job, I take them all seriously.

LIP: What will we see in season three?
SF: We’ve got Penny Marshall’s duplex apartment, which we split in two so she could sell one because she didn’t need the space. With [model] Erin Heatherton it’s about her first NYC home and she’s the decorator—she has a passion for it. We’ve got a 14,000-square-foot eclectic-style house in Connecticut that I built from scratch. George Oliphant [George to the Rescue] and I recue a military man’s Sandy-damaged house that he tried to fix himself after returning from Afghanistan, but he ran out of money.

LIP: Can your celebrity clients be difficult?
SF: Let me tell you something. Tina Fey, the first time I met her she just baked cookies and asked me if I wanted one and she wasn’t kidding. You think celebrities are something else, but they’re just normal people. Same problems. Of course they want beautiful stuff, but at the end of the day, there are ones who’ll ask, “Can you do a little better on the price?” What they prize is anonymity: They don’t want you to bring people over to meet them.

LIP: What are some of the more outrageous jobs you’ve been given?
SF: I’ve delivered a woolly mammoth tusk for a CEO. I travelled to Afghanistan to literally pick the stone for the kitchen counters off the mountain. I’ve been to Italy to match a stucco finish that’s on a house in Napoli that the guy wanted here on the Island. I’ve bid on King Henry VIII’s 10,000-square-foot barn in England, which if we won was going to be shipped in pieces to build a home in the Hamptons. 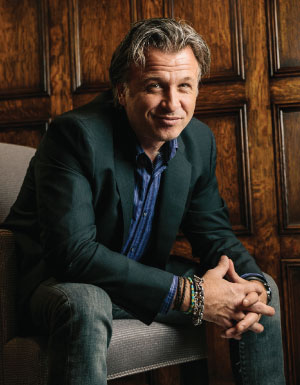 LIP: Is there a job you couldn’t complete?
SF: I was offered seven figures as a bonus to do a job that took three years in one year and I turned it down because I knew I couldn’t give them what they wanted. Some people would say “Deal. Give me half the money up front. I’ll try.”

LIP: What have your clients been asking for?
SF: High-gloss finishes on walls and wood floors are hot right now. When it comes to tiles, bigger is better: 24×12-inches or 24×6-inches. And stack them vertically instead of horizontally: Tiles are moving out of the bathroom and into the living space, like highlighting a wall in the living room with tile instead of paint. Starphire glass is trending. It’s low-lead so it doesn’t give off that green hue that you’d have in a glass shower enclosure. Speaking of glass, glass railings and walls are really in right now.

LIP: Is it all about smooth and shiny?
SF: No. I’ve also been using a lot of tile and wall covering with texture, like faux leather. And shark or ostrich shagreen on ceilings and walls as a highlight—it’s a faux skin.

LIP: Have you seen any really innovative products lately?
SF: They have glass rods with lights in them for closets as opposed to putting a light fixture in. Picture having your clothes on a rod that lights up. TVs that are hidden inside mirrors so if you’re doing yoga in your workout room you can follow along with the class on tv. When the tv is off, it looks like a normal mirror.

LIP: Do a lot of your projects include home automation?
SF: Yes. I love integrating lighting, HVAC, your cameras and everything that you can put on a smartphone or an iPad. I love the mini iPads, I’m putting them everywhere inside walls. I’m totally pushing automation.

LIP: Do you see yourself doing tv full time?
SF: It’s something I do because I enjoy it. But my true passion, my true love, is building peoples’ homes and knowing that they trust me with their castle. Aside from your family and health, the next most important thing is your home.

LIP: What is the goal of the tv show?
SF: We’re showing people how to think outside-the-box because everything is so vanilla these days. I’m dealing with the top designers and architects who are coming up with ideas that aren’t mainstream yet. I’m taking these ideas and putting them on the show so instead of doing your house like everyone else’s, I’m giving you ideas that aren’t even out there yet.

LIP: What’s your dad’s take on your jobs?
SF: His head twists, but since he’s old school, he believes in never giving enough credit [to me]. Before he says a room is great, he’ll go look at a handrail to see how I finished it. It’s like showing him a Ferrari and then he walks up to it and kicks the wheel to see if there’s enough air in it. He’ll never tell you it’s beautiful until he actually test drives it and makes sure there’s nothing wrong with it.

LIP: So it’s tough to get his approval?
SF: It’s hard as can be. It’s still as hard as when I was a kid, which is cool because it motivates me. He definitely has given me my credit. He’s definitely told me he’s proud of me, which is all I really wanted.

LIP: How can homeowners protect themselves when hiring a contractor?
SF: Unfortunately just asking for a copy of their license isn’t enough. There are so many contractors lying about having a license. Their bid comes in at half the price of a legit contractor’s. Some guys get the cheapest insurance they can and it actually doesn’t really cover them, but it’s a piece of paper they can show that says they’re insured. So when a contractor falls off the ladder and insurance comes into play the homeowner is screwed.

LIP: What’s the one thing you should do before calling a contractor?
SF: Research the basic steps online. If you want to save money before you bring that contractor in to fix a busted sink, figure out what the problem is and figure out the basic terms. If you know those, the contractor is a little less keen on taking you for a ride—because you know what a 2×4 is, what a washer is, that the drain needs to be snaked.

LIP: Is a general contractor with his own team better than the one who uses subs?
SF: Think of a general contractor as an agent. You hire him and he’s hiring his stable of talent for your production. You don’t want a contractor who has a guy who does the tiling, plumbing, framing and pavers on the same job. Avoid jack-of-all-trades-type guys; you’ll get a better result with specialists.

LIP: How do you get the most out of your budget in a kitchen?
SF: The biggest impact will be in new appliances. Then consider a new countertop material, backsplash upgrade, under cabinet lighting and new hardware for the cabinets and drawers. If you can, leave the cabinet boxes alone because once those come out you have to replace everything else. I’m not a fan of refacing cabinet doors, but you can buy a new door and give the kitchen a whole new look.

Gold Coast Restaurants: Cipollini, Toku, Cafe Continental, Limani and Il Mulino. I eat once a week at Bryant & Cooper, by myself because I’m the steak guy in the family.

Island towns: Recently, I’ve been renting in Westhampton Beach. I think Sands Point is beautiful and Port Washington is a great town.

Vacations Spots: We love Puerto Rico and its El Conquistador, so you can probably find me there during Christmas. Usually during spring break you may find me at the Four Seasons in Nevis.

Fashion: Versani on Mercer Street for jewelry. I’m a vintage Adidas or Puma
fan—suede not leather—that’s all you’ll ever see me wear. Swiss Army watch most days because it’s durable and gives good time but on occasions a Rolex. I’m a jeans and a collared shirt or jeans and a T-shirt kind of guy. I have enough stress so I don’t need clothes to make me feel uncomfortable.

Cars: I have a cream Porsche 911 turbo convertible with a brown top as a toy, to the job site I drive a Jeep Grand Cherokee.

Music: Elvis Duran, he’s a client of mine, so I listen to Z100 a lot. But some good rock ‘n’ roll: AC/DC, Guns N’ Roses, The Beatles, Van Halen with David Lee Roth or rap; I’ll listen to Eminem.

Building materials on Long Island: New Hyde Park for furniture-grade plywood from Chesler Plywood and floor coverings from Data Carpet & Rug. Hyde Park Moulding in Hauppauge for real plaster moldings. Manhattan Shade & Glass Co. has their factory in Hauppauge, they’re one of the biggest suppliers in Manhattan. Artistic Tile, in Manhasset.
And Lowes—I’m a Lowes guy.