When English settlers came to Long Island in the 1600s, they often carried apple seeds, saplings and cuttings with their other belongings. In those days, apple trees sprouted on farms and backyards all over the region, according to the descendants of some of those early families. Apples were handy because they were nutritious, could be stored during the winter and could be made into sweet cider which—with a little prompting—fermented into hard cider. “The trees came over with the earliest settlers. Everybody planted apple trees,” said John Halsey, who runs Water Mill’s The Milk Pail store, farm and orchard with his wife and two daughters. John is a descendent of the Halsey family that came to Long Island in the 1640s.

“You have to remember, there was no way of shipping stuff. Most of it was done by ox wagon,” said William J. Sanok, retired agricultural program director for Cornell Cooperative Extension of Suffolk County in Riverhead and president of the Agricultural Society of Queens, Nassau and Suffolk Counties. As steam power became available in the 19th century, commercial orchards stretching from Flushing to Oyster Bay to points east could ship fruit more easily to urban areas. When Levittown was built just after World War II, every yard included fruit trees. But once suburbia supplanted farmland, commercial orchards largely disappeared.

Still, a small orchard flourishes in Northport. Andrew Amsler, his brother Louis and Louis’ son, also named Louis, run the 22 acres, which sells directly to visitors who drive up its quarter-mile gravel driveway to a post-and-beam barn that hasn’t changed much since it was built in 1900. It’s called Richters Orchard after Frederick W. Richter. “Our dad came in 1934 to work for Mr. Richter,” after graduating from Farmingdale, then an agricultural college, Andrew said. Eventually, he leased the business and then purchased it around 1946 after Richter died. His three sons, Andrew, Louis and Donald (who manages a golf course), attended Cornell University to major in pomology, or the study of fruit. “If you want to be an apple grower, that’s where you go,” Andrew said. When his father wanted to learn to make cider, he got help in blending juices from neighbor Virginia Dripps. Dripps was a descendant of Rear Admiral Hiram Paulding, who purchased a nearby mill in the 1800s (now a private home) and was famous for making Admiral Paulding’s Pippin Champagne, a bubbly cider made from pippin apples. Andrew’s father later taught John Halsey (of The Milk Pail) about cider making, after Halsey bought some bottles from him in the early 1970s. (The two families remain friends.)

The Jericho Cider Mill, which uses apples from upstate and the East End, was purchased in 1938 by the father of the present owner, George Zulkofske. The present building dates from around 1918, but there was a mill there before that and two more on adjacent properties. Both of those are now gone. The remaining mill however, is going strong. Zulkofske, who said Walt Whitman once stopped by for a refreshing quaff in Jericho, hopes to make as many as 125,000 gallons this season. “It’s part of Long Island history,” he said.

But the North and South Fork orchards, where apple growing has mostly shifted, haven’t been there for centuries, even though some of the families running them have been. The potato reigned until after World War II when farmers could no longer compete with the high-volume output in Idaho and Maine. By the early 1950s, many of those farmers started turning back to the mainstay of their ancestors, becoming Johnny Appleseeds of the 20th and 21st centuries.

“We were disillusioned with potatoes as our primary crop. Hardly anyone on Long Island could make money,” said Tom Wickham, whose family owns 300 acres in the Cutchogue area. His ancestor Thomas Wickham came to Long Island from New England in the 1600s “looking for better farmland” and he is the 13th generation of Wickham farmers. In the late 1940s and early 1950s, the Wickhams found a solution for their potato problem: They planted fruit trees. 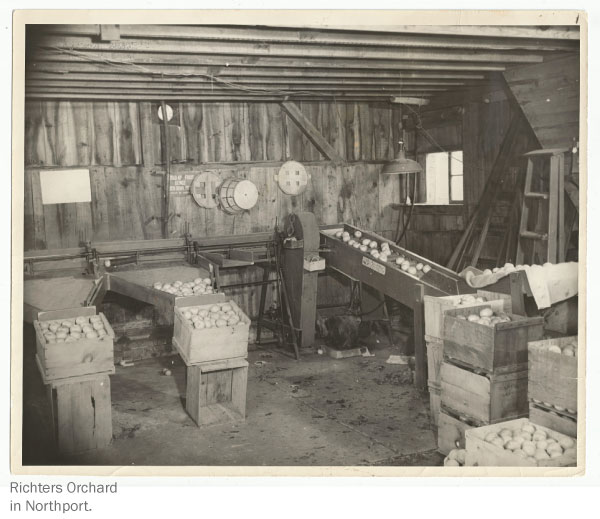 This time around though, Long Island’s apple growers aren’t shipping their produce to other markets. For the most part they’re luring urban and suburban residents from New York City, Nassau and Suffolk to pluck their apples directly from a tree or select a basket or two from a farm stand—and maybe pick up a fragrant pie or a bottle of cider as well. Pumpkins are also on the menu of most of these farms, which are now primarily retail establishments.

The development of better fungus control and of smaller trees has made apple growing more practical for Long Island, according to Wickham. Now there are even trees that grow close to the ground like vines, making it easier for families to pick their own apples without the danger of climbing ladders. “People want the whole country experience,” said Erick Lewin, a mere fourth generation farmer, whose family owns 1,100 acres in Wading River. “It’s a mini-vacation for them and it works out better for the farmer, too.” The profit is about the same whether people pick the fruit themselves or pay a slightly higher price for apples picked by a farmhand, but “the pick-your-own brings out more people.”

“At this point, the pick-your-own market has the most potential for us,” said Ed Harbes, another 13th generation Long Island farmer. Harbes and his wife Monica started their own complex of farms in Mattituck, Jamesport and Riverhead—about 2,000 acres in all—after they married in 1978.

Some 30 or 40 years ago, he said, the prevailing sentiment was, “why should I pick my own?” Now concerns about healthy food sources help to fuel the new movement. It was his son Edward’s idea to plant an apple orchard in 2010. Already, it has expanded into selling apple cider doughnuts, apple pies, apple fritters and cider that a neighbor with a cider press makes for them. His daughter-in-law Shannon “is taking a lead role in apple marketing,” he added. “Every generation needs to find the agricultural products that are relevant to its place and time. My son chose an apple orchard to serve his generation.”