After starting with the modest goal of extending the summer season on Long Island’s East End, the Hamptons International Film Festival (HIFF) has evolved and grown over the past 21 years into one of America’s premier regional film festivals.

Guided by David Nugent, entering his seventh year as Artistic Director, the festival is flourishing, focusing on three signature elements: International cinema, local filmmakers and prestige movies. “Ninety-eight percent of the movies playing in the area during the rest of the year are American,” Nugent explained. “We try to strike a balance by presenting a wide range of movies from many countries.” 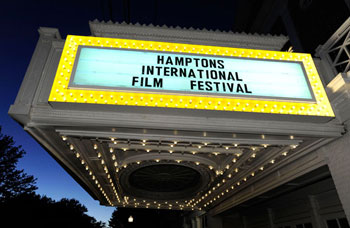 Newly-minted Executive Director Anne Chaisson is committed to involving the local community with the event, which is reflected in the HIFF’s partnerships with area arts organizations like Guild Hall, the Parrish Art Museum and Robert Wilson’s Watermill Center that all host screenings and events.

As with most festivals, the offerings Nugent describes as “prestige films” are the cream on top that attracts more casual filmgoers. Nugent and his team have been particularly successful in attracting these high profile crowd-pleasers. “We’ve shown the eventual Oscar winner for Best Picture in four out of the past five years,” Nugent noted, “and the films we showed last year received thirty-two Oscar nominations.” Nugent is confident that the festival’s 2013 edition will be no different, predicting they’ll represent “some of the best films of the year.”

And Nugent is especially excited about the latest result of the festival’s ongoing collaboration with the famed Alfred P. Sloan Foundation. Each year the foundation gives a $45,000 cash prize to a film that promotes a greater public understanding of science, which is then featured at the festival. This year’s recipient, Decoding Annie Parker, is based on the events that culminated in the recent landmark Supreme Court decision on patenting human genes. The screening will be followed by a discussion featuring filmmakers and scientists.

This year’s festival runs in October, but the organization is busy year-round. It is followed by the HIFF Screenwriter’s Lab that pairs four aspiring screen scribes with industry professionals (also sponsored by the Alfred P. Sloan Foundation). A number of projects have already become movies, including the recent well-received release Short Term 12, soon-to-be-released The Discoverers and Fort Bliss (in production).

In the summer, the HIFF presents their highly acclaimed documentary film series, SummerDocs. “It’s a program that’s fun,” Nugent said, “an alternative to the kind of films that dominate theaters in the summer.” Each film is followed by a lively discussion with a wide range of guest speakers, which have included Billy Joel, Daniel Ellsberg, Carl Bernstein and Josh Fox.

HIFF will take place October 10-14. The film lineup was not yet released at time of printing, but should be up soon at hamptonsfilmfest.org. Films are usually shown at theaters and arts venues in Southampton and East Hampton.