Near the end of the LIE heading east, a casual drive along Route 25 puts you in the heart of Long Island wine country, which, like good wine, has an inviting balance. The wineries bespeak an earnest desire to attract visitors, which is countered and mellowed by a genuine bucolic bliss. Vast fields of produce, rows of vineyards in bloom and roadside farm stands dot the landscape with authentic Americana, revealing a Long Island worlds away from traffic, strip malls and chain outlets.

There are over fifty wineries dotting the map from Riverhead to Orient Point. The Island’s unique geographic positioning, natural minerality and relatively temperate climate make for grapes of every shade, variety, color and taste. Combined with the entrepreneurial spirit of the winemakers who call the North Fork home, the recipe for good wine exists here in abundance. 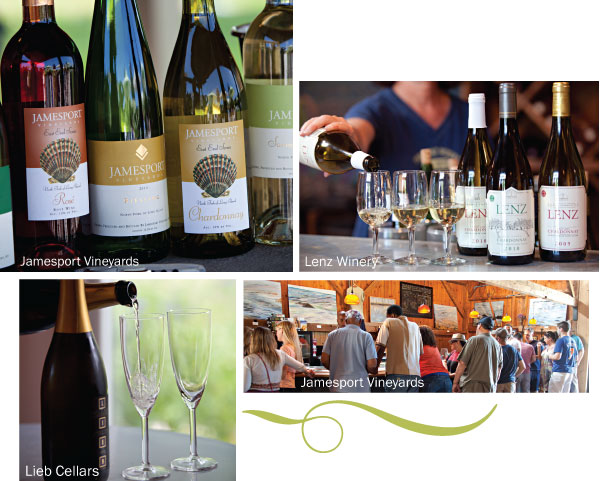 For the White Lover
By Drew Moss

…until I went to Jamesport. Just past Riverhead is Jamesport Vineyards, one of the original five wineries established on Long Island. The family business was started by owner Ron Goerler Jr.’s father in the early ‘80s. With the right blend of daring, vision and calculation, the senior Goerler turned some old blighted potato fields into a vineyard, renovated the old barn and hoped for the best. “It was dilapidated,” said Goerler Jr. of the property’s original condition. “My dad is an entrepreneur, 87 years old. He used to be in the [horse] trotter business, he was into real estate, he was a pilot in the war… he was just one of those guys. He wanted a farm where he could grow things. The grape industry was just starting to blossom out here. I’ve been involved from the beginning and I saw what he saw.”

Jamesport has several whites that stand out. Their 2011 East End Series Chardonnay is robust, with a bit of smokiness derived from oak barrel aging and a fine bite up front that dissipates just as quickly. Their 2010 Late Harvest Riesling is lighter, with sweet undertones that complement the brackish local oysters shucked and served at their outdoor oyster bar. On any given weekend through late October, this intoxicating combo can be enjoyed while sitting at wooden picnic tables scattered on Jamesport’s expansive lawn as live music breezes through the vineyards.

Cruising further eastward on Main Road 25, then inching further North towards the Sound, the wineries start to pile up quickly—and it can be difficult to decide which deserve a visit. In pursuit of the best whites, we made our next stop Lieb Cellars in Cutchogue. Where Jamesport is homey and rustic, Lieb is sleek and sophisticated without losing its sense of East End casual.

The tasting room at Lieb is airy and open, giving off a subtle, eclectic charm. Tasting Room director Mark Anderson was pouring when we arrived and immediately turned us on to Lieb’s claim to fame, a brilliantly clean 2009 Blanc de Blancs that shimmers and fizzles both in the glass and on the palate. This sparkling wine comes on with a bright effervescence, tingles and dazzles with just the faintest hint of citrus and then vanishes—leaving plenty of space for pairing with caviar, oysters or other light fare. For Lieb’s signature 2011 Reserve Pinot Blanc, the winemakers thought the grapes they planted were Chardonnay, only to find out later they were Pinot Blanc. This happy accident resulted in a wine with a crisp palate that remains throughout the sip, with hints of honey and sea spray lingering toward the end.

Lenz Winery in Peconic is a pleasant hybrid of our two previous stops. The vineyard held some of the warm, rustic charm of Jamesport and was hosting a visiting clientele of sophisticated, young East Enders on a Saturday afternoon tasting reminiscent of Lieb. Multiple couples saddled up to the long bar in the tasting room, while small groups sat at outdoor tables under sun shades taking in the tasty sounds of an acoustic guitarist. Tasting room manager Jerol Rickard took us through Lenz’s White Flight tasting, which hit its peak with two Chardonnays of particular distinction. The 2010 White Label Chardonnay was a showstopper, notable for its crisp, clean attack and bright acidity. This wine is a blend of Chardonnay picked at three different times during the harvest season. Each picking brings its own flavor profile, all of which come together seamlessly to create a very drinkable and versatile white. The 2009 Gold Label Chardonnay is an oakier rendition, with hints of caramel and vanilla. Allowed to linger, the complexities of this particular bottle revealed a creamier, thicker profile with a sincere warmth and depth that, on dissipation, was reminiscent of finely aged Scotch.

Each of these vineyards and their wines provided an array of subtle distinction, but all embrace an equilibrium of sophistication and simplicity. It’s that harmony combined with an intoxicating sense of casual escape that makes North Fork wineries so inviting. 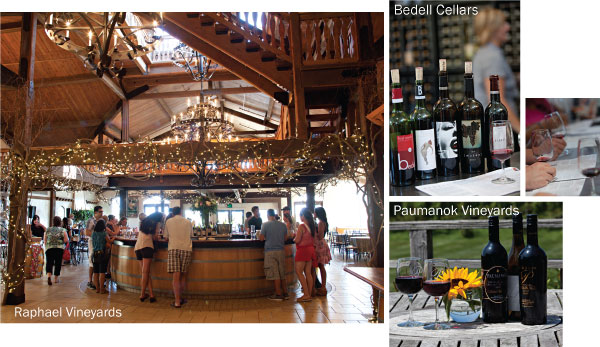 For the Red Lover
A triumvirate of tastemakers
By Josh Max

Raphael’s enormous and elegant main hall, all slate and wood and metal and marble, is reminiscent of a stately Mediterranean plantation—you might feel as though there is a grand event taking place even though you may have arrived on an ordinary day. Despite the resplendency, it’s a relaxed atmosphere in which to sample a selection of wines including their Rosé of Merlot, Cabernet Franc and La Tavola ranging from 2005 to the present. Alongside Raphael’s ’05 edition, winemaker Anthony Nappa also praises the 2007 Merlot. “They go into French oak barrels which we have shipped here and they stay in the barrels for about a year and a half. Then they’re bottled and aged until they’re released. We only make reserves when the crop is exceptional and those were great years… The climate helps us to retain acidity, low alcohol and a nice balanced wine.”

Head one minute westward on Route 25 and find Bedell Cellars. The main building resembles a homey, upscale country store, the fields out back extending as far as the eye can see. This is juxtaposed with up-to-the-minute amenities such as a parking lot charging station for electric cars. Owned by Michael Lynne (of Hollywood fame), the entire estate comprises three vineyards totaling 80 planted acres: Bedell, Southhold’s Corey Creek Vineyards and Wells Road Vineyard in Peconic. Bedell’s winemaker Rich Olsen-Harbich recommends the Musée for red lovers, “The fruit is very mature, very ripe, with concentrated flavors. It’s blended, so the components change as we make it. For 2010, we have a wine that’s 65 percent merlot and Cabernet Sauvignon, as well as Petit Verdot and a little Syrah in there, all well-known French grapes…We make about 10 barrels in most years.”

A few miles west in Aquebogue, the 103 acres that comprise Paumanok Vineyards are owned and managed by Ursula and Charles Massoud and their three sons. Their tasting room is muted, uncluttered and aimed at the true connoisseur, relying more on quality than attempting to beat market prices, said Kareem Massoud, the sibling in charge of winemaking. Those visiting this year are in luck: They can sample the 2010 Assemblage. “What makes it special is we don’t make it every year, only in what we call ‘a grand year.’ We’re basically declaring that we think it’s one of our most outstanding vintages. The current release is 35 percent Merlot, 33 percent Cabernet Sauvignon, 21 percent Petit Verdot and 11 percent Cabernet Franc. Rich and round, with intense aromas of cassis, blackberry, black cherry and spice, this wine has really beautiful structure.” 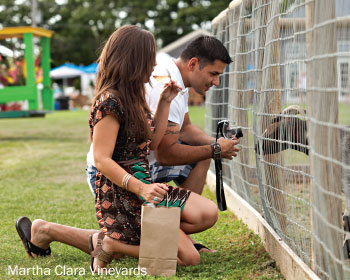 Martha Clara’s tasting room evokes a feeling of grandeur and the many choices of wine are “as diverse as the people who make them,” according to winemaker Juan Miciele- Martinez. Although the selection is diverse, the can’t-miss offering is the 6025. “It’s a blend and it changes from year to year,” said Martinez. “But the newest 2010 6025 is a bordeaux-style blend of Merlot, cab sauvignon, cabernet franc, petit verdox and malbec. It’s aged in oak for 24 months and is only made…when nature provides the absolute best grapes.”

Another unique aspect of the winery is their dog-friendly vibe. 2013 saw their third year of Vines and Canines, a pooch-friendly day where guests can bring their dog along as they tour the vineyard. The walk happens about twice a month and lasts about 45 minutes.

Shinn Estate Vineyards seems a placid, homey estate upon first glance. Its lush greenery, propeller atop a pole gently spinning in the breeze and inspirational signs with messages like “grounded,” “heartfelt,” “lovestruck” and “radiant” are all part of the foreground. Owned by Barbara Shinn and David Page, and overseen by winemaker Patrick Caserta, Shinn’s wines encompass a variety of savory reds. The flagship is the 2009 Estate Merlot. “We make about 600 cases per year,” Caserta said. “The thing that stands out about our reds—actually, all our wines—is that they’re fermented with wild yeast from the vineyard, so they’re naturally made. We’ve found over the years that our wild yeast imparts earthiness and complexity… After fermentation, we allow our reds to macerate for 45 days, so we get really beautiful extraction of flavor, color and tannins.” Though the wine is meant to be savored upon purchase, Shinn said it matures for about five to seven years. If too much consumption happens upon purchase, visitors can spend the night at Shinn’s Farmhouse Inn and in the morning, the owners will even cook breakfast (reservations are also available in advance). 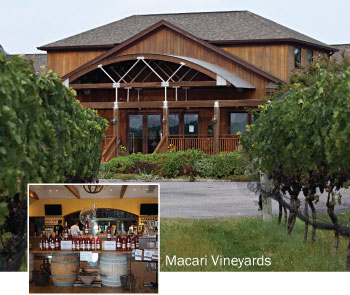 The Macari family used to dedicate 200 of the 500 acres they’ve owned for over 50 years to potatoes. In 1995 they ditched the spuds and started a world-class vinegarden opening a second 20-acre vinery and tasting room in 2009 in nearby Cutchogue. Winemaker Kelly Urbanik said, “We’re known for our Cabernet Franc… It’s got a nice flavor with a little bit of spice, a little green pepper and green olive, but still balanced with red fruit. It has a very savory character and it goes well with all foods. Right now we’re selling our 2008 and then we’ll go into our 2010.”

“Our idea of fun,” said Alexandra Macari, Director of Sales and Marketing, “is having a glass of wine in your hand and sitting on the deck, surrounded by 15 acres of Merlot grapes and really enjoying the view and the vibe… It’s more of a chill experience, but a tasty one.”