Challenging rooms, tight spaces, dated décor…what to do? And, how? We know you’re thinking about smoothing out the details before the holidays hit and a little inspiration can go a long way. Pulse queried innovators in the region’s design community to find the most compelling, on-trend looks of the moment. We were awash in a sea of emails bearing photos and stories of wrongs righted, impractical designs turned into welcoming spaces, budgets stretched to a point of hilarity and challenges overcome. The tips, pitfalls and bragging points are assembled here, dissected in our inaugural great how to. 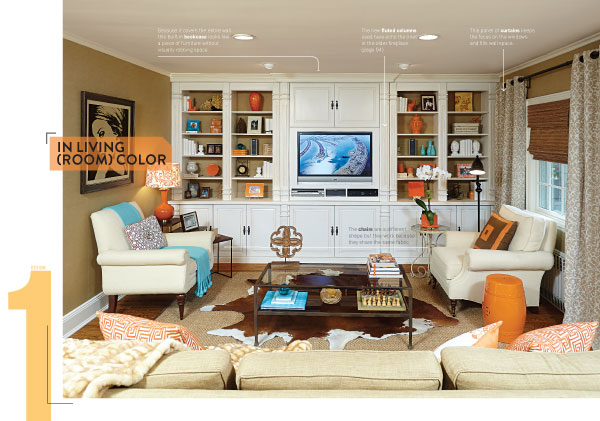 Design 1: In Living (Room) Color
For many DIYers, working with color is a scary concept fraught with potential mistakes. That may explain why so many interiors end up being studies in neutral. Designer Lisa Loesch, who co-owns HarLoe Interiors with Terri Harkins, streamlined the approach in this family and sitting room renovation. “Pick out furniture in a classic shape and color, then punch up the color in the room with accents,” Loesch said. “When seasons or trends change, it’s far less expensive to replace accessories.” Loesch amps up the color in this room using shades of orange, a color of choice right now.

A few elements tied everything together. The textured wallpaper wraps around the room, including the back of the bookcases for cohesion. The bookcase’s countertop is on the same plane as the adjacent window’s trim, giving the impression the new built-in has always been there. The neutral color of both the shelves and the furniture fades into the background, allowing the bright orange accessories to pop forward.

• Because it covers the entire wall this built-in bookcase looks like a piece of furniture without visually robbing space.
• The new fluted columns used here echo the ones in the older fireplace.
• This panel of curtains keeps the focus on the windows and fills wall space.
• The chairs are a different shape but they work because they share the same fabric. 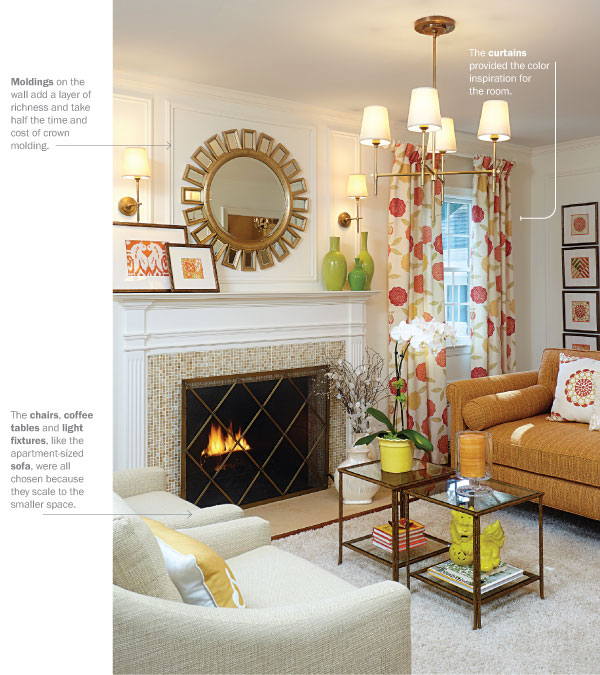 The sitting room’s smaller size would fill up quickly with bulky furniture, deflating the light that streams through the windows. Loesch scaled the furniture and accessories down, keeping the room airy, but didn’t skimp on rich details like mosaic tile on the fireplace and applied molding above the mantle. “I was at Home Depot and bought the mosaic tile sheets to cover up the existing brick fireplace surround and now in the morning when the light hits it, it sparkles.” The mix of the fireplace’s traditional molding, 60s style light fixtures and turn of the century mirror gives the room an unstuffy, relaxed vibe. Keeping the color confined to items that are relatively easy to swap out—curtains, candles, vases—makes wholesale color changes later much easier.

• Moldings on the wall add a layer of richness and take half the time and cost of crown molding.
• The chairs, coffee tables and light fixtures, like the apartment-sized sofa, were all chosen because they scale to the smaller space.
• The curtains provided the color inspiration for the room. 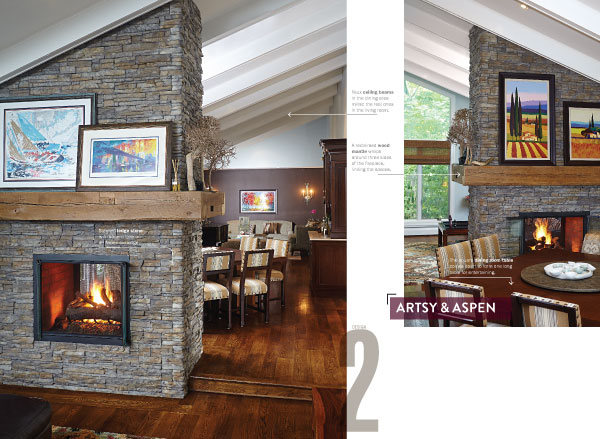 Design 2: Artsy & Aspen
The young family in this East Hills home wanted stylish and comfortable spaces that could effortlessly host a family for movie night or friends for a dinner party. Keith Baltimore, of the Baltimore Design Group, connected the family’s love of nature and their visits to Aspen with classic Arts and Crafts details. That meant some rough-meets-refined elements, like a salvaged block of wood hung as a mantle.
By removing a wall near the fireplace that separated the dining room from the living room, Baltimore opened the space up to nearly the width of the home allowing entertaining to flow from one room to the next. “The house was stuck in this 1985 visual that needed to be updated,” Baltimore said. “Everything was so compartmentalized and it had to be opened up.”

• Stacked ledge stone is a modern take on an Aspen ski lodge.
• Faux ceiling beams in the dining area mimic the real ones in the living room.
• A reclaimed wood mantle wraps around three sides of the fireplace, linking the spaces.
• The square dining room table comes apart to form one long table for entertaining. 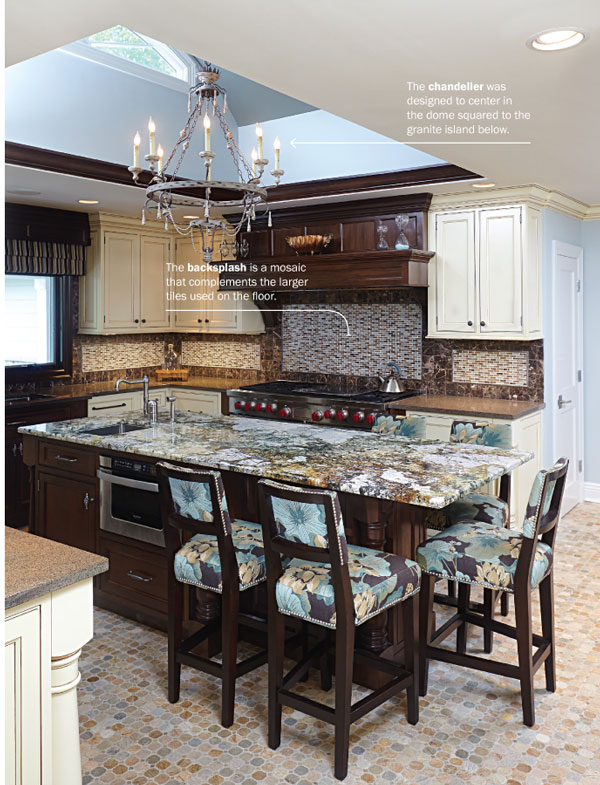 The focal point of the new space is a massive, dual-sided fireplace covered floor to ceiling in ledge stone. The rough face of the stone is refined by the smooth, machined edges in a pattern that works with the living room rug. The dining room, capturing light from a new window wall, sits off the kitchen where the table is paired with sofas and chairs—keeping the feel of the space casual.

An eyebrow-shaped window atop a dome in the kitchen casts plenty of sunlight into the space. The massive center island has a small prep sink and was designed in contrasting cabinets and countertop colors. The turned legs give it the feel of a piece of furniture. The same bluish/green wall color runs through all three rooms, unifying the design.

• The chandelier was designed to center in the dome squared to the granite island below.
• The backsplash is a mosaic that complements the larger tiles used on the floor. 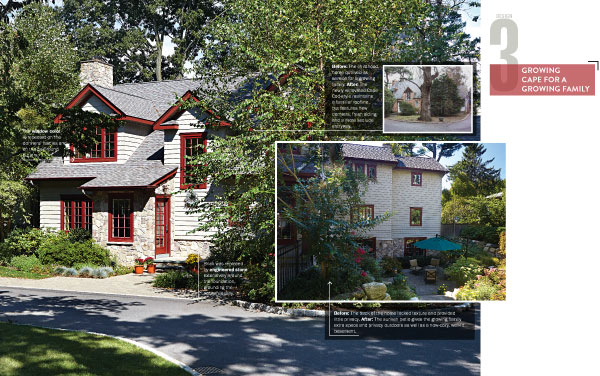 Renovating a childhood home as an adult is a rare opportunity. When the owner of this turn of the century Cape Cod-style home decided to modernize it for her growing family, the goal was to keep the approachable feel of the old house while infusing more open living space. That started at the front door. “The main entry was concealed from the street to create a sense of intimacy and to conceal it from fairly busy Roslyn Road,” said architect Paul Pellicani of Architect’s LOFT. Bumping the door out and turning it 90 degrees gives the entry privacy and removes its openness. It also created the space for a foyer replete with a bench and coat hooks.

Though 1,390-square-feet larger, from the curb the home appears to retain its original footprint, lending to the authenticity of the remodel. The roofline was raised but in proportion to the new gables, preserving the scale. “We took the gable roof of the stair tower and dropped it by a foot or two lower than the other gables so it draws your eye to the center of the home and that entrance,” Pellicani said. The stairwell’s window splashes the entry foyer in morning light. The burnt amber window trim sets the tone for the exterior’s color scheme, which includes earth-toned fiber cement shakes and engineered stone. Pellicani said using the window as an opportunity to introduce color is often missed when clients opt for white or taupe.

Out back the family gained much needed privacy with a walkout basement patio. A number of neighboring houses had sightlines into the backyard of this 325-foot-deep property. The excavated walkout solved that, providing a private space that also floods the formerly dark basement with light, converting it into a functional family room.

Before: The childhood home outlived its service for a growing family. After: The newly renovated Cape Cod-style maintains a familiar roofline, but features new dormers, fresh siding and a more seclude entryway.

Before: The back of the home lacked texture and provided little privacy. After: The sunken patio gives the growing family extra space and privacy outdoors as well as a now-cozy, well-lit basement.

• The window color is repeated on the dormers’ fascias and on the half round gutters.
• Brick was replaced by engineered stone extensively around the foundation, grounding the house visually. 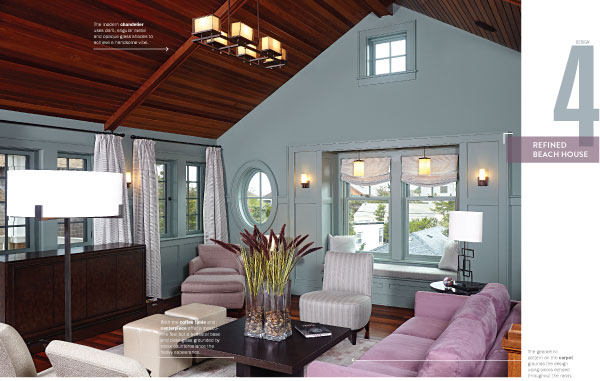 When designer Evelyn Chin took on the project of finishing the interior of a newly built colonial on Fire Island, she was happy her clients didn’t want to go the kitschy route. “They asked for calmness and serenity,” Chin said. “They were not into seashells and I’m not into that nautical theme.”

Chin inherited a space with angular, chunky moldings and a wall of windows sandwiched between a pitched ceiling and African walnut floor. Before she picked a thing, she gave her homeowners a bit of homework: Cull inspirational photos from a variety of magazines at the bookstore. “Most clients don’t know what they like but it’s easier for them to tell you what they don’t like.” Chin aggregated the results to develop a concept around the textures of a man’s jacket and the elements of the ocean.

• The modern chandelier uses dark, angular metal and opaque glass shades to achieve a handsome vibe.
• Both the coffee table and centerpiece offer a masculine feel but a pedestal base and clear glass grounded by rocks counterbalance the heavy appearance.
• The geometric pattern on the carpet grounds the design using colors echoed throughout the room. 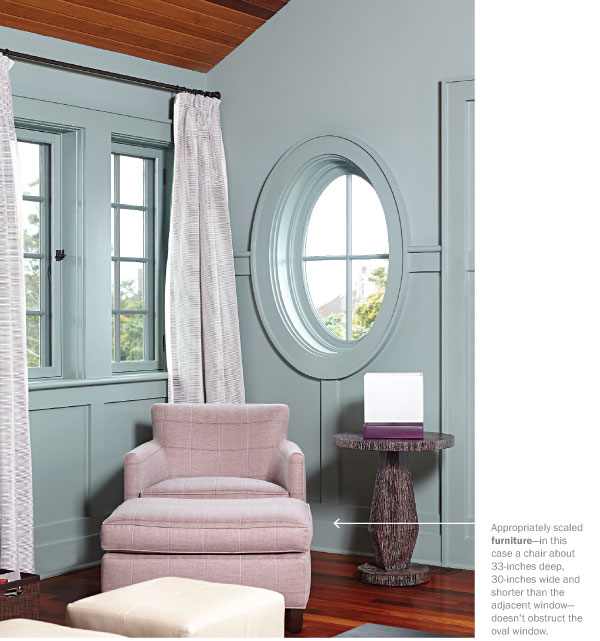 The living room shares an open floor plan with the nearby kitchen. Preserving the views through the windows was critical for both the visual connection to the environment and for sunlight to move through the home. The built-in window seat’s crisp trim lines are softened with a cushion surrounded by light and feathery window treatments to juxtapose the structured moldings. The soothing sea foam blue wall color is a different take on the representation of water and the furniture elicits a similar relaxing feel, like the velvety plum sofa. To tone down the seriousness of the clean lines, the room features six different fabrics with varying patterns or textures that lend a sense of eclectic whimsy, which any good beach house has. The oval window is left bare to preserve its architectural features and command attention, but the overall aesthetic is a calm space that doesn’t take itself too seriously.

• Appropriately scaled furniture—in this case a chair about 33-inches deep, 30-inches wide and shorter than the adjacent window—doesn’t obstruct the oval window. 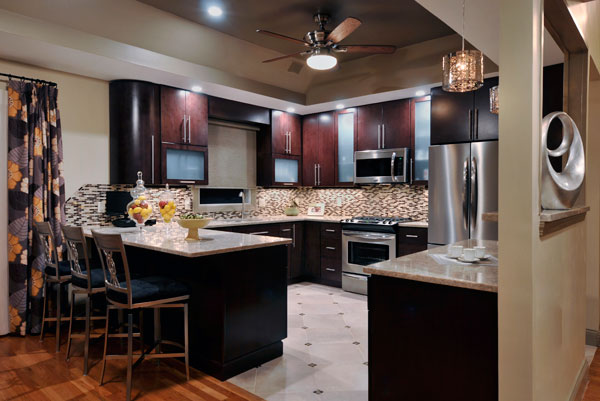 A Kitchen Designed to Entertain

Designer Karen Lyons, of Comfort by Design turned a dated kitchen into a usable space that her clients wanted to cook and entertain in. That’s a tall order for a standard size kitchen, especially one in an older home. To get the added space she knocked down a wall and joined the kitchen to the adjacent living room. Where she couldn’t remove the wall, she punched a picture window opening between the kitchen and living room. To gain illusion of vertical height her design called for a tray ceiling spanning the entire kitchen was built. The only challenge in these plans would be to open a supporting wall.

A straight flat panel door in an espresso finish sets the tone of the modern aesthetic, continued by the smooth, chunky stainless steel hardware. The light, cream quartz countertop appears to float above the darker cabinetry. To bring both elements together the backsplash incorporates cream, espresso and stainless elements. 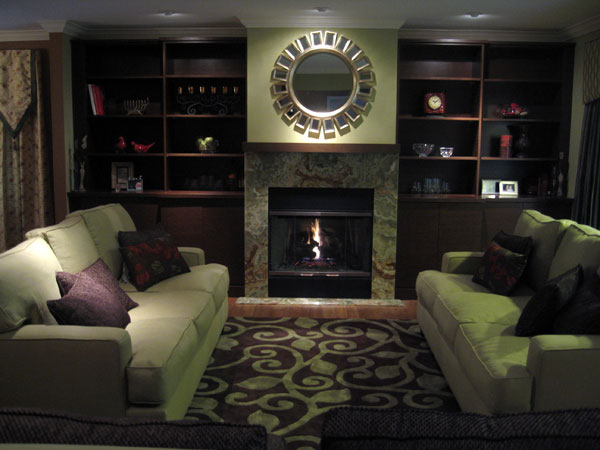 A homeowner, stuck in what she described as “college dorm style,” asked designer Crystal Photiou of CP Interiors for help. Photiou’s answer is a style that mixes traditional and contemporary. In the living room she added built-in bookcases flanking the fireplace, new furniture, rugs, window treatments and artwork while including the homeowner’s piano. “What I love about transitional style is that it is timeless,” Photiou said.

“It’s warm and inviting with a twist.” 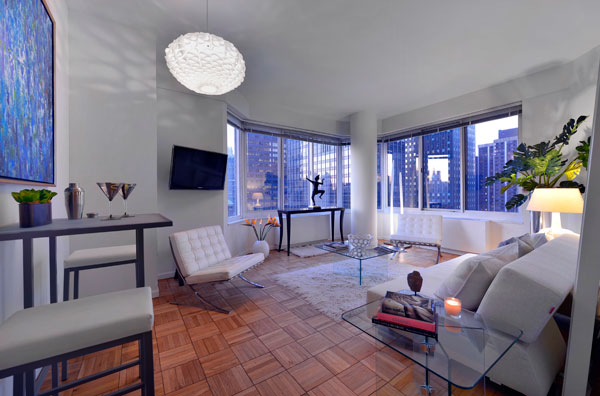 Making the most out of small apartment

Decorating a small apartment has uniquely challenges that require strategic thinking. Designer Deborah Martin used this space’s strong points, high ceilings and window walls, to make room feel larger than it is. A neutral palette, dramatic art and important accessories creates a soothing reprieve from the fast-paced urban tempo, yet it won’t lull guest to sleep while entertaining. The monochromatic furnishings, combined with the natural light, results in a seamless, airy look. Furniture legs are kept skinny, a clear glass lamp and cocktail tables are functional without adding visual clutter.